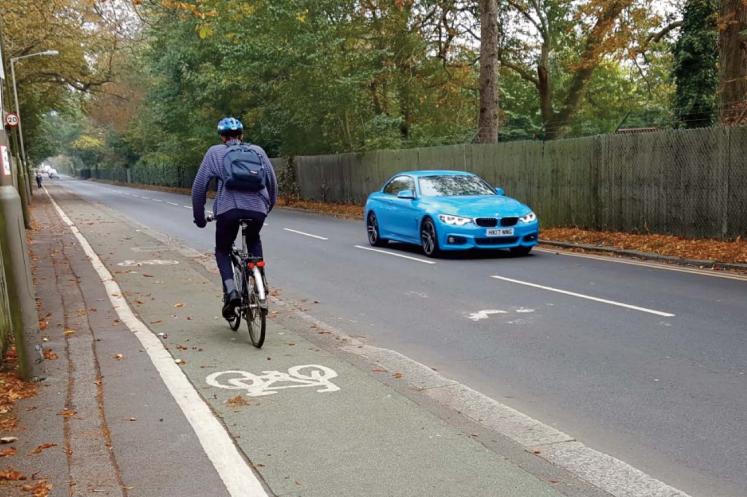 Wandsworth Borough Council is consulting over planned changes to a road popular with cyclists heading to and from Richmond Park following a number of high-profile incidents in which riders have been subjected to abuse by motorists who believe they should be using a cycle path on the adjacent footway.

The local authority plans to relocate the cycle path from that runs on the footway of Priory Lane in Roehampton between Arabella Drive and Bank Lane onto the carriageway, as well as installing an advisory cycle lane between Bank Lane and Danebury Road.

It also plans to introduce a number of features aimed at curbing the speed of motorists, including installing five raised junctions and eight flat top speed tables, as well as replacing a mini-roundabout at the junction with Dowdswell Close with a priority junction.

Priory Lane forms part of both the Borough and the National Cycle Route Network catering daily for over 1000 pedal cyclists. It is also a busy route for traffic as it runs parallel to Roehampton Lane, providing an alternative link between two main roads, Upper Richmond Road (red route) and the A3 Roehampton Vale.

Priory Lane is long and straight with a footway on only the northbound side of the road. In some parts of the road, peak mean speeds can reach up to 28mph which can make cycling intimidating. A cycle track therefore occupies half of the footway for much of its length so that cyclists, particularly those cycling more leisurely or with less confidence, are segregated from motor vehicles.

However, the current arrangement raises several issues, namely: the remaining footway is unsatisfactorily narrow for pedestrians; many cyclists remain in the carriageway, as well as being observed in the cycle lane; Priory Lane’s character as a cycling route where speeds should not go above 20mph is not clear to drivers; the diversion of the cycle route through Bank Lane and Roehampton Gate is not practical, most cyclists choose to continue along Priory Lane as it is a more direct route. Moreover, in the three-year period to December 2016 16 personal injury collisions were recorded in Priory Lane, 12 of which involved cyclists.

The proposals aim to improve pedestrian facilities by removing the cycle track from the footway and providing a constant footway width of 2.0m. Likewise the introduction of a northbound advisory cycle lane along the entire length of Priory Lane and associated changes to the highway layout aims to assist cycling and safety. Installation of cycle friendly speed tables/junctions are also proposed in this scheme to accentuate the 20mph speed limit in Priory Lane. Southbound cycles will be integrated with motor traffic. Road markings with the cycle symbol will be installed to raise awareness of the presence and legitimacy of cyclists on the carriageway

Here on road.cc, we’ve reported on several incidents involving motorists who mistakenly believed that cyclists should be riding on the path on the footway.

Indeed, it’s difficult to recall another road anywhere in the UK where we have reported on so many separate cases of cyclists being subjected to abuse.

The first – and most notorious – involved south west London café owner Jason Wells, originally from Australia, who was filmed in March 2016 unleashing a torrent of abuse on a rider. Wells was subsequently fined for committing a public order offence.

In July 2016, the Metropolitan Police were called to an incident on Priory Lane after a driver allegedly knocked two riders off their bikes on purpose, with passengers in the vehicle then getting involved in an altercation with other cyclists.

In September of the same year, a motorist posted footage to Facebook that showed him verbally abusing cyclists on Priory Lane as he drove past them.

The video, shot illegally using a handheld mobile phone while the motorist was driving, was subsequently deleted, but not before it had received hundreds of thousands of views on the social network.

The consultation on the proposed changes to Priory Lane will be open until 16 February 2018 and can be found here.