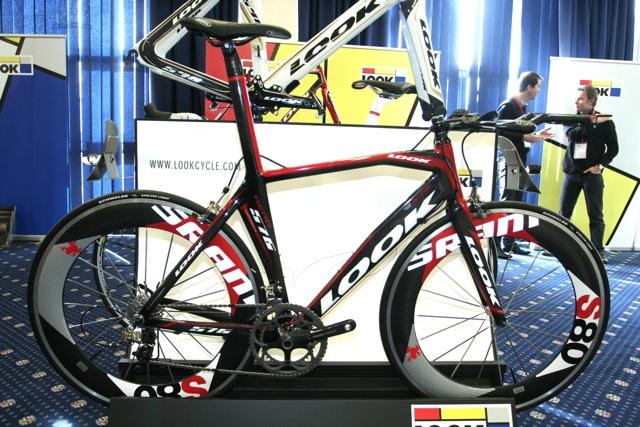 This week we've been at the Fisher Expo 09. Fisher distributes a number of big name cycling brands in the UK including Look, Dahon, SRAM, Tacx and Schwalbe amongst its portfolio – this year they were also showing of two new brands: bspoke cycle clothing and Lambretta bikes.

First stop was the Look stand to give the new 596 an up close and personal once over. We saw the 596 very briefly at Interbike last year (pictured below) but this time we were able to linger, even it it was only over the frameset rather than a complete bike. 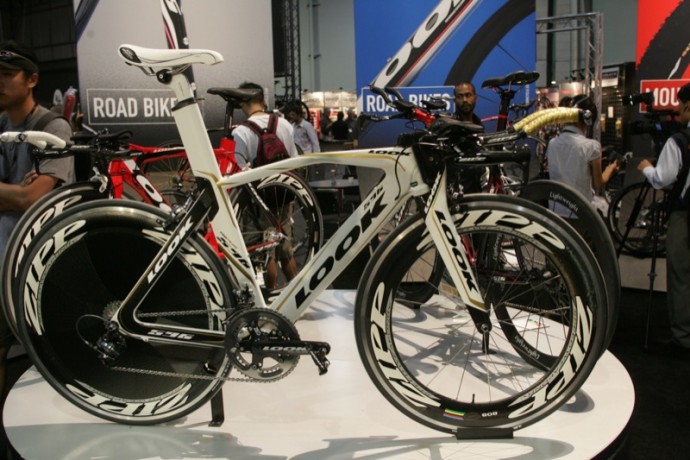 The 596 is the result of a lot of time spent by Look in the Magny Cours wind tunnel  which is just down the road from their headquarters in France. The resulting shape is very interesting from an aero bike point of view because while it it has many of the rounded out curves as seen on the likes of Trek, Scott, Cervelo and Argon 18's top end aero offerings – when you get up close you can see that the tube profiles are also deeply sculpted so it also looks quite light and skeletal in the flesh.

Look set themselves a brief of building a stiff, comfortable but above all aerodynamically efficient bike when creating the 596 – they reckon they nailed the stiffness and comfort with the lay-up and grade of carbon used. The aerodynamics is where all the scultped tube profiles come in… and that kink too. We've been assured that the 596's kink is all down to aero optimisation which doesn't then explain why nobody else seems to have discovered the aero properties of kinking the top tube and why Look themselves have various depths of kinks in various different places on their other bikes…

Sorry Look – we suspect this is all about being different in what is a crowded market place for top end aero frames which (yes, I am standing on my soapbox now), the laws of physics being immutable, are all starting to look the same. It does look nice though although it must surely make the internal cable routing to the rear brake a tad tricky, not to say potentially sticky. Aero kink or not, Look do have a lot to shout about with the 596. It boasts a number of clever features and sees a company that made its name through ground-breaking innovation dare to break with aero-bike orthodoxy when it comes to the gap between the rear wheel and the frame.

For the last few years the back wheels on time trial and triathlon bikes has been getting closer and closer to the seat tube. On the new Argon 18 E114, which we saw at the CORE Bike show, the seat tube actually wraps around the rear wheel like a faring – Look says this is all wrong.

They argue that tucking the back wheel in like this doesn't take account of the turbulence created by the rear wheel as it spins and that their testing at the Magny Cours wind tunnel which has a rolling road proves this. Here's the Look line straight from the horse's mouth (their brochure):

“When the bicycle is in motion, and the wheels are spinning, turbulence is created from the wheel rotation. An opposing zone is created when you have frontal wind forces meeting the opposing wind forces coming off the top half of a forward rotating wheel. With the wheel gap air flow coming around the frame and the air flow coming off the rotating wheel are allowed to smoothly pass one another. With no wheel gap the air flow from the wheel rotation hits the frame and crates a disruptive turbulence that restrains the air from moving smoothly, thereby creating additional drag.”

We asked Mike Burrows, a man who knows about these things for his opinion… he was pretty adamant that from an aerodynamic point of view the gap would make no difference either positively or negatively. On the plus side there's no chance of you shredding your back tyre against the seat tube or or anything get it wedged between wheel and tube which could be nasty at high speed.  And, of course, it means you can fit mudguards… okay possibly not.

Other clever touches include the über stiff Zed one-piece carbon crankset which uses a neat elliptical shim – Look call it the Trilobe system – to allow you to adjust between 170mm, 172.5mm and 175mm without taking the crankset off the bike. The Zed cranks are housed within their own integrated 65mm bottom bracket unique to the 596 – aside from anything else we're guessing that a dedicated bottom bracket is a necessity if you are going to build a one piece crank, spider and spindle – otherwise it might be a tad difficult to fit.

The other feature on the 596 that appealed to us was the E Post which works in conjunction with the integrated seat tube. The E Post also features on Look's carbon monocoque road bike the 586 and the 596's baby brother aero bike the 576. It gives you up to 3cm of height adjustment, doesn't need an external clamp and, via one of a choice of three elastomer spacers that come with it, gives you a measure of tunable vibration damping for a more comfortable ride. A Look 596 frameset costs £4299.99 and that buys you frame, fork, E Post, and Zed cranks (which come with some titanium axled Look pedals).

Fisher did have a complete 576 at the show although the effect was somewhat let down by the uncut seat tube (see lead picture) which gave the impression the bike had been set up for someone with very, very long legs, but rather a short torso… mind you, we probably wouldn't cut down a £1700 Very High Modulus carbon frame for a three day trade show either.

As clever as the 596 and the equally impresive, though slightly less kinked and definitely less pricey, 576, the Look that we most hankered after was the new 566, a road bike that Look says combines race levels of performance with maximum comfort – so a sportive bike then.

You can never tell exactly what a bike is going to ride like simply by looking at it but the elegant 566 certainly looks like it would deliver on its promise of comfort and speed, (we'll certainly be asking the nice people at Fisher is we can have one to find out). What we also liked about the 566 is that Look haven't simply resorted to shortening the top tube and raising the head tube and hey presto! Sportif bike!

Okay, they have done that too, but they've given the 566 Twisted Stay chainstays which they say will boost comfort but not at the expense of efficiency, and again, they've thought about the right combination of grade of carbon and the layup required to do the job. Apparently it's “Made from a secret blend of High Resistance (that's the ordinary stuff -ed) and High Modulus carbon…” which does make it sound like Colonel Sanders has been let loose in the Look factory, but there you go… hopefully it'll turn out to be finger lickin' good.