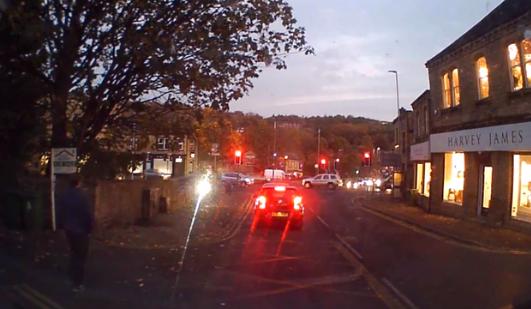 Not only was he on the pavement, his lights were too bright, complains motorist
by Sarah Barth

A driver has warned of the dangers of powerful cycle lights after filming how he was blinded by one bright light.

Dashcam footage from the motorist shows the incident off Lockwood Road and up Swann Lane in Huddersfield.

The driver said the rider was on the pavement.

He told the Huddersfield Examiner: “Not only is that illegal [but] you will then see how I was blinded by his high-intensity front white lamp flashing away like a searchlight.

“The lamp was directed upwards and if that had been a car at an MoT test it would have failed.”

Mirfield councillor Martyn Bolt said: “It’s not a blanket offence to ride on the footpath. If it’s safe to do so and then cyclist feels safer then they can.

“Cycle lamps have come on a long way since the Ever Ready days of big batteries. On the one hand we would welcome that this cyclist is making himself visible but they have to consider the effect on others.

“His light shouldn’t be shining up at the stars. It should illuminate the road. It’s probably further exacerbated by the person being on the footpath because they will be four or five inches above the road.

“However we should all share the road space and think about actions and impacts on other people.”

According to Cycling UK:

Motor vehicles have to be ‘type approved’ for use on public roads, and as part of that approval their lighting must conform with ECE regulations. These ensure that dipped headlamps don’t dazzle other road users by putting a top limit on the intensity of light emitted in an offside above-horizontal direction. For technical reasons different types of lamp have different limits**, but the most another road user should see from any ECE approved headlamp, when dipped, is 625 candela.

A few lamps on the UK market are made to conform with German traffic regulations, which limit the intensity of light emitted by a cycle headlamp, above the horizontal, to 200 candela. And an international (ISO) standard for cycle lamps is currently in preparation, which is likely to be adopted by CEN and will consequently replace the present confusion of different national standards for bike lamps in Europe. This ISO closely follows German regulations, including the dazzle limit of 200cd.

If you're in the market for a new set of cycle lights as winter draws in, check out our buyer's guide to over 55 models here.