Igor Anton, who today won his second stage of the 2010 Vuelta a Espana with a stunning recovery on the final climb just when he appeared to be in trouble, is starting to believe that he can win the overall title – and his self-belief has been boosted by the backing of Alberto Contador, the only man now racing to have won all three of cycling’s Grand Tours, who this evening told him, “You have the overall win in your legs.

Contador, who is commentating on the Vuelta for Spanish television chanel TVE, made his remarks at the end of today’s stage in Andorra-Pal, and was fulsome in his praise of the 27-year-old Euskaltel-Euskadi rider.

“I can see that you are confident and you have a good team to defend the jersey with riders like Egoi Martinez,” continued Contador, who earlier this week intimated that he may ride next year’s race with his new employers, Team Saxo Bank.

The three-times Tour de France champion has clearly had his eye on Anron for a while, telling him, “I remember how you dropped me at the Alto de Morredero at the Tour of Castilla y Leon,” and concluding, “You can believe in your ability to win in Madrid.”

Evidently, Anton too has grown in self-confidence. Earlier this week, when he first took the red jersey, he said that he believed Joaquin Rodriquez would win the overall title; today, however, after taking it back from the Katusha rider after losing the top spot in the GC just 24 hours earlier, Anton is far more bullish.

“It’s a great outcome with the stage win, the red jersey and the time bonus,” he admitted, adding: “Now I can’t lie anymore: I’ll fight for the final victory at the Vuelta. I’m not afraid of anything, except of experiencing a very bad day.”

Anton attributed his strong performance so far in this year’s race to a decision taken with team manager Igor Gonzalez de Galdeano before the season started that he would skip the Tour de France to concentrate on his home tour, while team mate Samuel Sanchez built his season around Jily’s three week race on the other side of the Pyrenees.

“For now the gamble is a success,” claimed Anton. “Samuel has had a great Tour de France and I’m going well at the Vuelta. I’ve realized last year that I was too tired at the Vuelta,” he continued. “We see today that it’s an advantage not to have done both. Riders like Mosquera and myself are going better than Menchov and Rodriguez who have done the Tour.”

However, Anton acknowledged that there was a long way still to go, saying, “This is not the end of the Vuelta. Many other things can happen,” he maintained, adding: “My team is ready for working hard to preserve the red jersey.”

Ezequiel Mosquera, whose attack with around 5km to go sparked fireworks as riders behind him struggled to keep up, only Anton managing to dig in deep enough to eventually overhaul the Xacobeo-Galicia rider who finished three seconds down in second place, said: “This is a great victory for Igor. He is more explosive than me for winning at the top of a hill but I’ve climbed well.” 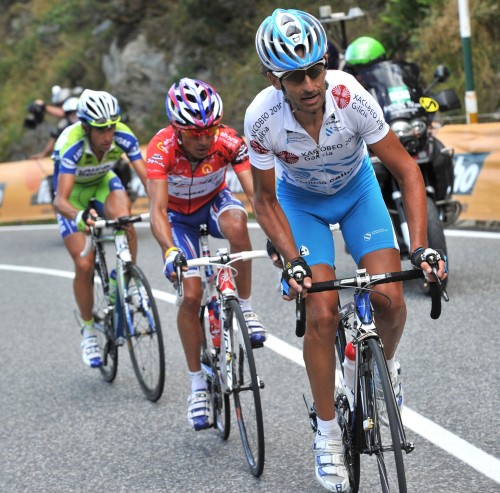 Mosquera added: “It’s been an important day for the overall classification. I would have preferred to win but I’m happy with how I’m going.”

Cervelo TestTeam’s Xavier Tondo rode his own race today, relying on knowledge of the climb to deliver him to the finish line at the right time, rather than following others’ attacks. His tactics nearly paid off as he finished just 10 seconds down on Anton and in doing so leapfrogged Liquigas-Doimo rider Vincenzo Nibali to go third on the GC.

“I know this ascent to Pal very well,” explained Tondo. “With the head wind, I’ve thought it was better not to follow Mosquera, Rodriguez and Nibali when they accelerated,” he continued. “I’ve preferred to keep my own rhythm and finish strongly. I’ve caught Nibali, I finish third of the stage and I’ve very happy because Igor Anton was unbeatable anyway,” he added. “I’m only one minute down on him on GC and there is still a long way to go at the Vuelta.” 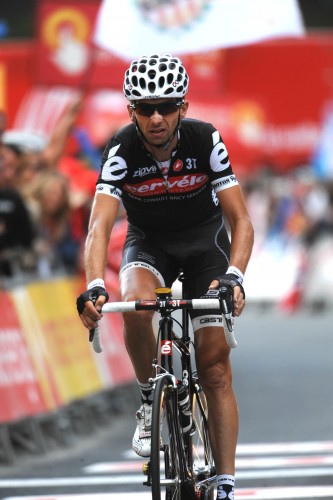 Rabobank were busy at the front of the peloton helping to reel in the two escape riders, who at one point had built a lead of around a quarter of an hour, but when it came to the final ascent, Denis Menchov was unable to stay with the pace. “It was a team management decision to get the team to work,” explained the Russian afterwards, adding “They did a good job. It was good to try, I think.”

Menchov, winner of the Vuelta in 2005 and 2007, his first win coming after Roberto Heras had been disqualified for doping, went on to explain that injury was not at the root of his problems today. “My knee was okay,” insisted the 32-year-old, who next season joins Carlos Sastre at Geox, the new name of the Footon Servetto team. “This is not the reason why I couldn’t follow at the end,” he added. “I just think that after the Tour, it’s difficult to ride well here.”

Fränk Schleck, sixth on today’s stage, recounted how he saw events unfold. “I’ve seen Joaquin Rodriguez attacking in the finale but I’ve preferred to try and stay with Anton,” he explained. The Team Saxo Bank rider, who had eight weeks off the bike prior to the Vuelta after fracturing his clavicle in Stage 3 of the Tour de France, said: “I feel better and better but it’s still not enough for fighting till the end.” 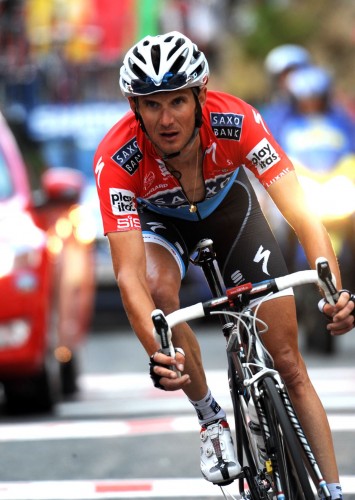 Schleck, whose brother Andy, together with team mate Stuart O’Grady, was thrown off the Vuelta yesterday by team owner Bjarne Riis after being caught sneaking back into the hotel after a late drink, insists he can still perform in the Vuelta, although of necessity he is now having to look to the likes of Fabian Cancellara for support. “I still believe in my capacity of doing something good,” Schleck maintained. “The race is still long and I believe a stage win remains reachable,” he added, although perhaps tellingly, the Luxembourg rider, two and a half minutes down on Anton after today, made no mention of the GC.

Besides heading the overall and the combined classifications, Anton is also leader of the points competition after today’s win, with Philippe Gilbert taking points on an intermediate stage today to move ahead of Mark Cavendish and Tyler Farrar in the standings.

However the HTC-Columbia and Garmin-Transitions sprinters, should rejoin their battle for the green jersey in earnest tomorrow as the race heads out of the Pyrenees and back into Spain, with a sprint finish forecast in Lleida.