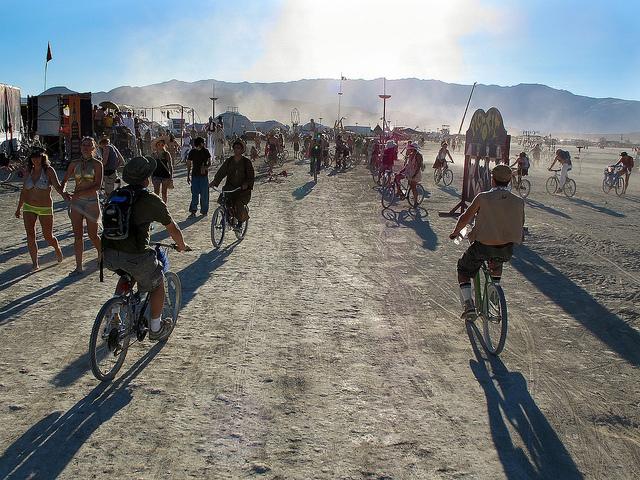 5,000 bicycles were left behind by attendees at event in Nevada's Black Rock Desert...
by Simon_MacMichael

Thousands of bicycles abandoned at the recent Burning Man festival in the US state of Nevada are being sent to hurricane victims in Texas and the Caribbean, reports the BBC.

The bikes were used to get around the sprawling community and art-focused festival in the Black Rock Desert that took place over nine days at the end of August and start of September.

But while one of Burning Man’s 10 guiding principles is to “leave no trace” through respect for the environment, many ignore it, with bikes among the items abandoned on leaving the site.

In the past, the event’s organisers have donated abandoned bikes to local charities but the 5,000 left behind this year was too many to be disposed of by that route.

It led to suggestions that they could be used to help people left without transport as a result of the recent tropical storms that have battered the Caribbean and Gulf of Mexico.

With as many as 1 million cars destroyed in Houston alone, Disaster Hack founder Matthew Rockwell, who is also a contractor at Burning Man, retrieved around 500 bikes he believed could be saved.

Meg Kiihne, a former resident of the Turks and Caicos Islands and who now lives around four hours away from the Black Rock Desert, realised that the bikes could be invaluable to her friends and former neighbours whose hoes and possessions were destroyed by Hurricane Irma.

Setting up a Go Fund Me campaign, she managed to rescue more than 100 bikes which will now be sent to the Caribbean once funds have been raised for transportation.

She said: "There are parts of the island which will not have power for months.

"Bikes can enable somebody who may have lost their home and staying with a friend, they can get to their job at a resort so they can continue to make money to help rebuild their home ... they can get around on a bike and get to food."

All 5,000 bikes are now offsite, although the nature of the festival means there is still some work to be done before they can be sent to their new owners, as Kiihne explained.

She said: "We have to go through an intensive cleaning process of cutting off all faux fur, lights, squeaky toys, baskets, and seat covers all trapping clumps of clay.”

Rockwell intends to keep some bikes close to the site and rent them to festival-goers next year, but is taking 100 to Houston – the fourth largest city in the United States – in the coming days.

The Texas city's bike share programme director, Carter Stern, says there will be no problem finding homes for them, and has already received 500 new bikes donated from Trek and Giant which have been given to victims of the disaster under an initiative called Keep Houston Rolling.

He said: "A lot of people who lost a vehicle all the sudden can't get to work, can't afford to get a new car.

“Long after the TV cameras have left Houston there's going to be a lingering need for transportation options.”