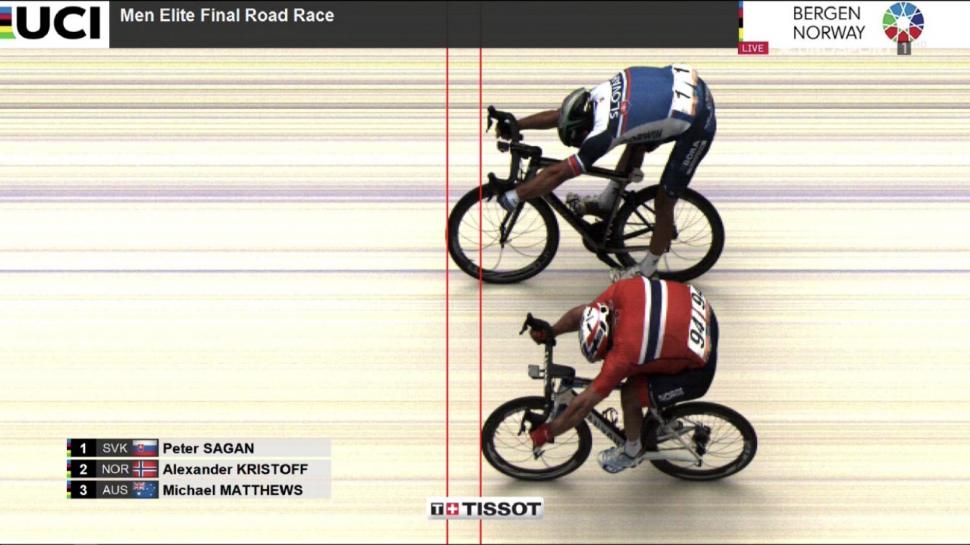 Unprecedented hat-trick for Slovak star as he edges out Norway's Alexander Kristoff in Bergen...
by Simon_MacMichael

Peter Sagan of Slovakia has won the UCI road world championship for an unprecedented third year in a row, just edging out Norway's Alexander Kristoff in a thrilling sprint finish in Bergen.

Sagan is the fifth man to win the title three times, and at the age of 27 few would bet against him becoming the first rider to win the rainbow jersey in the event four times.

By beating Kristoff to the line by less than half a wheel's width, he denied Kristoff the distinction of being the first rider to win the title on home soil since Italy's Alessandro Ballan in Varese in 2008.

Australia's Michael Matthews finished third from a select group that had reeled in escapees Julien Alaphilippe of France and Italy's Gianni Moscon in the closing kilometres after the pair had attacked on the 12th and final climb of Salmon Hilll.

Also contesting the finish at the conclusion of the 267.5-kilometre were Italy's Matteo Trentin, fourth, and Great Britain's Ben Swift, who was fifth.

Sagan dedicated  his victory to Michele Scarponi, the Italian rider who lost his life earlier this year in a collision involving a van.

The three-time world champion told BBC Sport: "It was not easy, guys were changing in the front all the time," Sagan told the BBC.

"I tried to go with the breakaay and it came down to a sprint, it was unbelievable.

"Kristoff was racing at home so I'm sorry, but of course I'm happy to win.

He said his historic hat-trick "is something special for sure. For me it's something very nice."

Swift said: "Sagan was incredible, I think all of us were trying a couple of moves because it was all over the place, but he did amazing.

"The team was brilliant today, we set out what we wanted to do and everyone rode brilliantly."