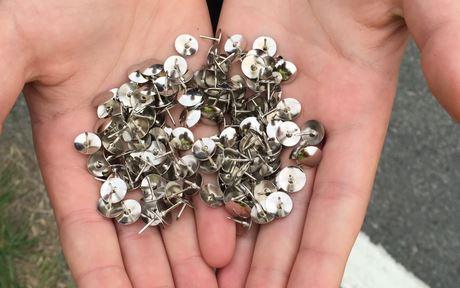 Police are investigating after reports that tacks were spread on the Pedal for Scotland route on Sunday. Almost 8,000 cyclists took part in the charity event and organisers branded whoever was responsible “idiotic” for putting them at risk.

Pedal for Scotland, organised by Cycling Scotland, is Scotland’s biggest bike event. Participants cycled from Glasgow to Edinburgh, but the Linlithgow Express reports that tacks were found near Whitecross and Linlithgow.

The ride involved a number of road closures and a Cycling Scotland spokesperson said that the incident had meant delays in reopening.

“Nearly 8,000 people had a fantastic time cycling with Pedal for Scotland. Friends, families and colleagues were raising money for charities close to their hearts and there was enthusiastic support from spectators in most towns and villages along the route.

“We regret that the action of an idiotic individual or group of people has caused problems for event participants and risked serious injury to people. It has also slowed us down in opening the roads again. The operational team helped remove the tacks as soon as they were reported. We would ask anyone with information about who committed this crime to report it to Police Scotland.”

A Police Scotland spokesperson added: “Police Scotland is investigating following a report of metal tacks on the road in Whitecross during a Pedal for Scotland event.

“The matter was reported to police around 1.10pm on Sunday, September 10, on Station Road. A number of bikes were damaged, however no cyclists were injured. There were also reports of tacks being placed on the road in and around Linlithgow.

“Inquiries into the circumstances are ongoing. Anyone with information is asked to contact Police Scotland on 101, quoting incident number 2396 of September 10.”

Pedal for Scotland was previously hit by a drawing pin attack in 2015. The firm providing mechanical support along the route on that occasion said it had taken more than four hours to work through all the punctures.

Earlier this month, farmers protesting road closures halted the Tour o’ the Borders sportive by standing in the road with draining rods. The self-proclaimed ringleader, John Marshall, described the event as "a waste of police time."

The farmers are alleged to have hit cyclists with the draining rods, but Marshall said that it was “meant to be a peaceful demonstration.” He accused some of the riders of trying to shoulder-charge them.