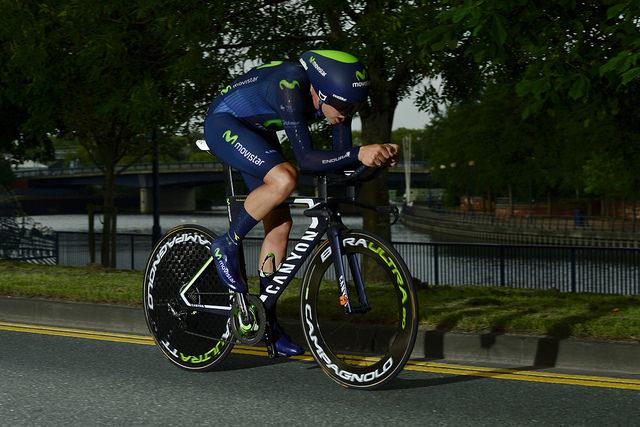 The Essex rider, aged 28, leaves Movistar after five years, which he joined from Team Sky in 2013.

His debut season at the Spanish UCI WorldTour outfit saw him win a time-trial stage at the Giro d’Italia, and in 2015 he won the overall at the Bayern Rundfahrt.

The same year, he set a new UCI Hour record of 52.937 kilometres, although that distance would be beaten by Sir Bradley Wiggins the following month.

“It’s so exciting for me to join this team,” Dowsett said. “I had five amazing seasons with Movistar but it is time for a change and I look forward to joining Team Katusha-Alpecin.

“Every team has a different approach and I feel I can learn a lot.

“The nice thing for me is that I can stay on the phenomenal Canyon bikes. They were such a huge sponsor for me in the last years, and in my opinion, it’s the best bike,” he added.

Team manager José Azevedo commented: “Alex is one of the best time trial riders in the professional peloton.

“We see nice opportunities with him to bring horse power to the team in the team time trials.

“Moreover, because of his TT skills, he is able to win stage races, as he has proved already in the past.

“Alex is still young but he has a lot of experience. I have a good feeling about him,” he added.

Dowsett said that while he would focus on time trialling, he would also be looking to play a supporting role in Grand Tours to riders such as German sprinter Marcel Kittel, another new recruit for the 2018 season.

Dowsett, who has haemophilia, has set up a charity called Little Bleeders to raise awareness of the disease and support those who have it.

He added: “To get on the podium is always a special moment for me. It’s a message to our haemophilia community to always get the best out of our lives.

“It shows what anyone is able to achieve no matter what the circumstances, or in whichever team.”