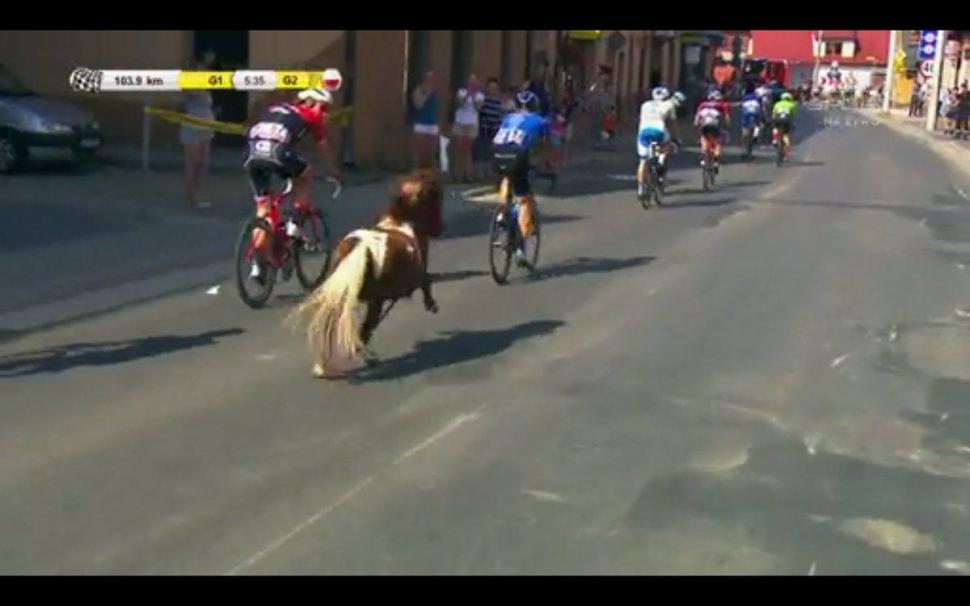 Video: Pony joins peloton at the Tour of Poland

Cue the Pony Gallopin jokes - and even the Lotto Soudal rider's wife, Marion Rousse, joined in...
by Simon_MacMichael

If you watched the Tour de France on TV last month, you’d have seen a few people riding their horses alongside the peloton, a hardy perennial at the world’s biggest bike race – but today, a riderless pony got inside the peloton at the Tour de Pologne.

The small horse, which we’re guessing bolted away from its owner after being spooked by the passing cyclists, galloped inside the bunch for a minute or so before being shepherded (You may wish to brush up on your animal husbandry terms -Ed) to safety by the Gazprom-RusVelo rider Roman Maikin.

Footage was posted to Twitter by CyclingHubTV, which couldn’t resist a pun on the name of Tony Gallopin, confirmed yesterday as switching from Lotto-Soudal to AG2R-La Mondiale for next season.

CyclingHubTV also suggested that the pony might make a decent substitute for a certain four-time Tour de France champion (Mont Ventoux is one thing, but for the Pyrenees, we’d recommend a Merens – after all, they are native to that range).

Among the people who tweeted about the pony was Gallopin’s wife, former pro cyclist turned TV commentator Marion Rousse who, echoing safety messages put out to specators by Tour de France organisers ASO said: “Don’t run next to the riders!”

Today’s sixth stage of the race was won by Jack Haig of Orica-Scott.