The Red Hook Crit crashes into a rainy London
by VecchioJo

The first Red Hook Crit was organized to celebrate David Trimble’s 26th birthday back in 2008 and under his captaincy the race has gone from a vaguely organised alley-cat race in the back streets of Brooklyn to a multi-sponsored media heavy world-wide phenomenon over its ten year history. The initial Red Hook was held with no sponsors, prizes, promotion or permits to race with only a few dozen cyclists and a handful of spectators, the race was won by Kacey Manderfield in field that wasn’t segregated by gender. 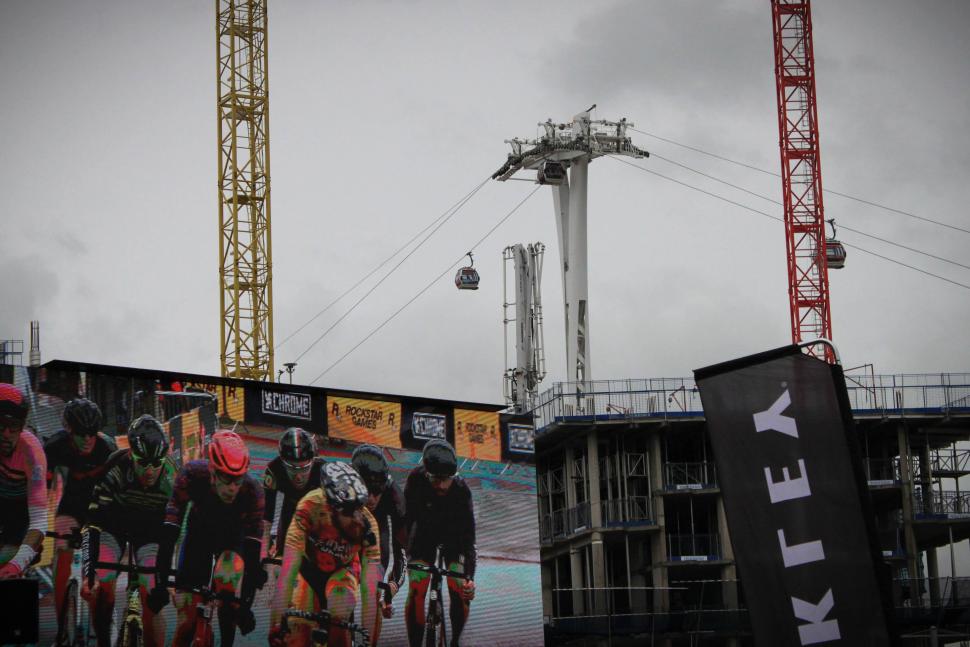 From its home base in New York the Red Hook Crit has straddled the Atlantic to race in Milan, Barcelona and London, where this year sees its third visit to the UK’s capital round a short circuit in the Greenwich Peninsula under the gaze of the O2. The day is cold and grey and heavy showers have been rattling across the city all morning, the empty impersonality and cranes of Docklands combined with the standard British summer weather are probably a bit of a departure from the romance of Barcelona and Milan. Maybe not Brooklyn though. The racing is based around a crit course, a short street circuit with sharp corners and brief straights, a no holds barred style of racing that’s fast and with a high level of jeopardy at the best of times, race on a fixed-gear bike without brakes and you’re guaranteed a thrilling spectacle. It’s, um, exciting for racers, it’s great for spectators. The full morning of qualifying heats has been frustrated by the wet weather making for nervous racing thanks to the multi surface course with its fair share of road paint made slippy. Races are marred by crashes and some might have said that it edged towards the dangerous at times, but the Red Hook Crit riders seem to be made of tough stuff. Whatever you think of fixed riders, or fixie riders, or fixie-twats, however you like to describe them, you can resolutely put all of that aside here. For while there is definitely ‘A Scene’ that’s apparent as you walk around the pits and your prejudices might be rewarded by a lot of tattoos and aching cool but the competitors at Red Hook Crit all take the event and the racing very professionally. Although there are different levels to this, for while some outfits like The 5th Floor and the Cinelli-Chrome Team are well prepped and slick with a good coverage of E-Z Ups, comfy chairs and rollers to warm up on, others are doing it out the backs of cars, or changing under the meagre cover of the car-park ticket booth. Standard British cycle-race drizzly car-park procedure then. 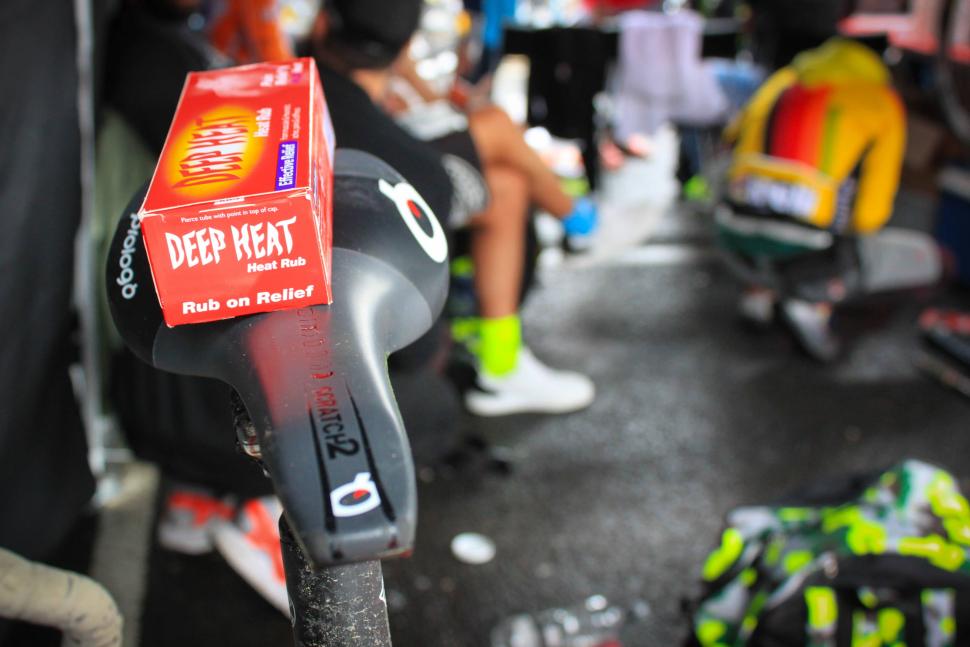 At the pointy end of the racing it’s as far away from your stereotyped skinny-jeaned hipster fixie rider as you could imagine, it’s deadly serious top level racing. The men’s field seems to be sprinkled with ex-pro road racers and a highlight and home favourite in the women’s racing is Dani King, an Olympic gold medalist and three times world champion back to defend last years London win. 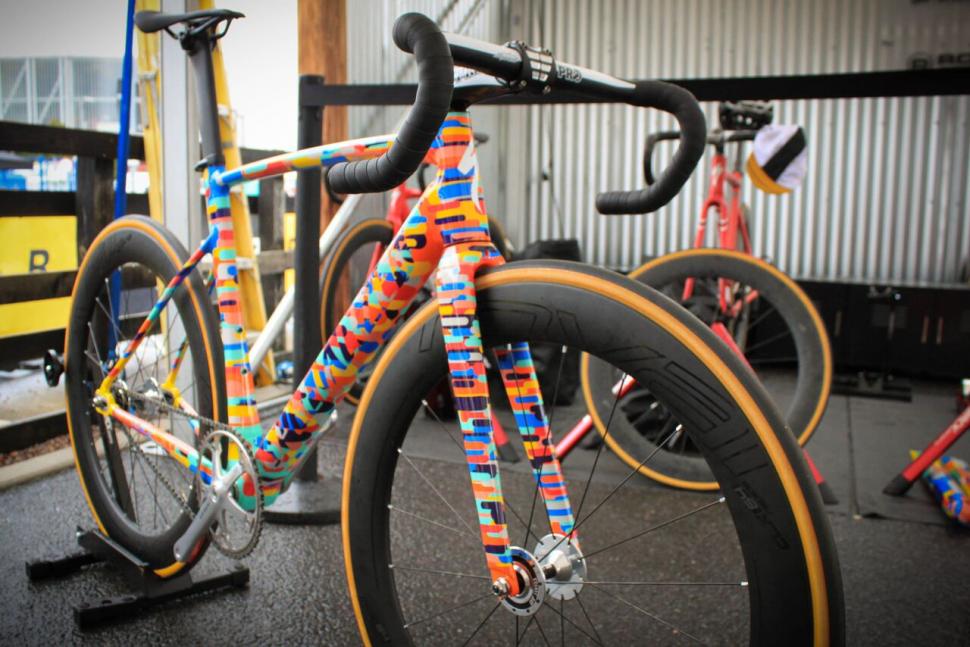 The Red Hook Crit is an image heavy event, branding is strong throughout with Rockstar Games as a major sponsor and Specialized as bike patron, handing out special edition bikes to the winners and producing limited edition funky paint job bikes for the event and handing out similarly patterned ThunderSticks for spectators to make noise with. It does good traction on image heavy social media feeds with companies having entire teams based around fixed racing and there are a lot of custom painted bikes and matching skinsuits. Lots of skinsuits. It’s hard to keep up with the hashtags. In real life it’s a fantastic spectator sport and is worth any cycling fans day out. The city location makes it easy to get to, the racing is action packed speedy with short laps keeping rotation frequent, and the compact course means you can easily walk to the next most interesting corner to wait for something to happen. The promise of a crash is always high, another thing fed by on-line sharing. To keep onlookers happy in the short gaps between races there’s a line of street food stalls down the side and beer and coffee to be had, if the sun was out it would be a great day out but the weather today makes it typically UK stoic. The women’s final is an anxious affair as although the rain has mostly stopped, or is a half-hearted drizzle, the roads are still very wet with puddles and it’s quite crashy from the first to last lap. Dani King spends a lot of time at the head of the race looking over her shoulder at the lead group stuck to her wheel but it comes to a sprint at the end and the top riders are ahead of a pile up on the last corner with ex speed skater Raphaele Lemieux improving on her 4th in the Brooklyn race and grabbing top spot for Team iBike. 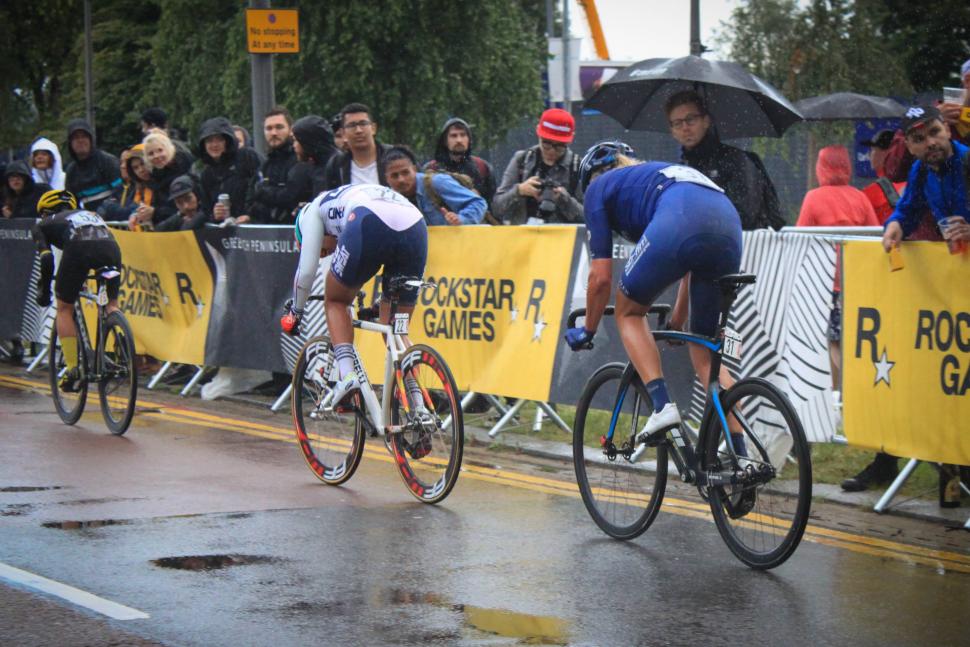 The men’s final starts in grey twilight and strings out almost immediately in an impressive display of power as the big hitters smash it out at the front. Team tactics come into play as some riders puncture and have to manage speedy wheel changes or grab spare bikes and their team-mates do their best to control the pack. In the last third the course goes suddenly empty and quiet, is that it? They can’t have done all their laps. The race has been red flagged thanks to a crash in the field and on the restart the previously stretched out race became a fast seething bunch with lots of elbows and shouting. Despite the Specialized / Rocket Espresso team dong their best to boss the peloton Filippo Fortin of Team Bahumer snatched the win. True to British cycle racing form the podium jerseys and prizes were awarded in the dark and rain. The next stop for the Red Hook Crit will be in Barcelona on the first Saturday in September, it might be sunnier. 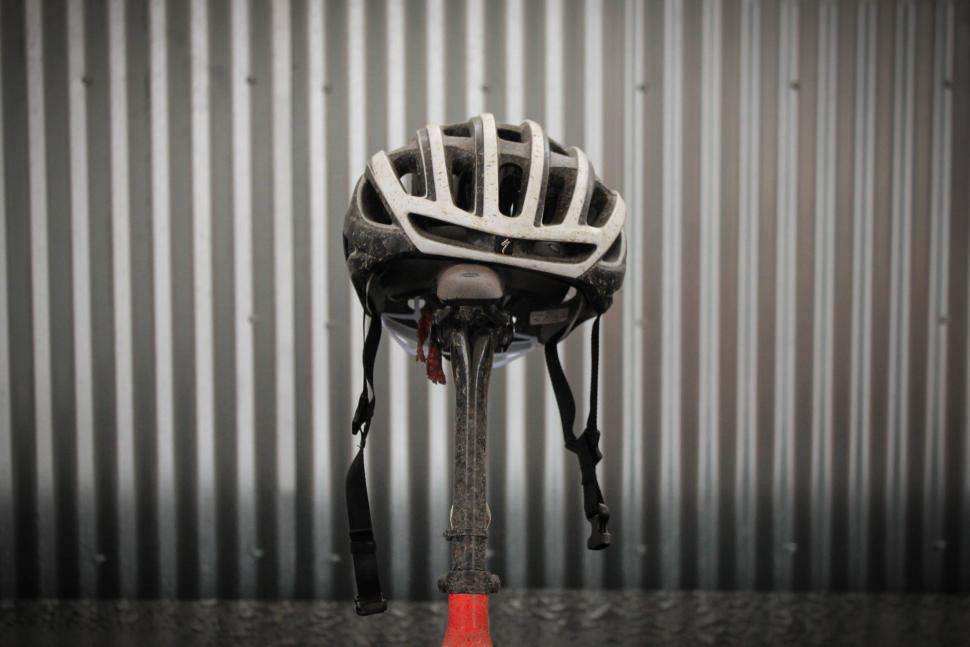