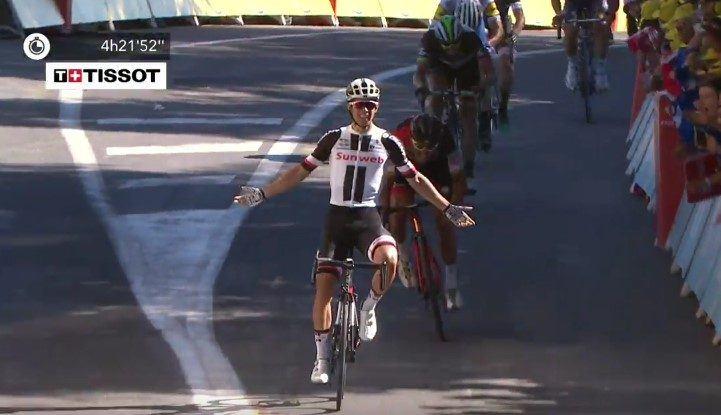 Michael Matthews (Sunweb) has beaten Greg Van Avermaet (BMC) to take the 181.5km stage to Rodez. Gaps also formed in the reduced peloton over the course of the uphill finish meaning that Fabio Aru (Astana) surrendered the yellow jersey to Chris Froome (Sky).

The stage was hilly enough that the out-and-out sprinters were dropped and it was left to the punchy climbers to contest the finish.

Philippe Gilbert struck out early on the final ramp, but was passed by Van Avermaet and then Matthews, who had power to spare. The Australian rolled to the line, barely pedalling.

Speaking after the stage, Matthews said: “It went as expected. We rode all day. We kept the breakaway so close, I knew I'd very few team mates at the end, but still I had 2-3 guys with me in the final. It's a sweet day. Last time here, two years ago, I had four broken ribs. It was the stage I targeted before I crashed. To come back and win is a dream come true.”

The fast closing kilometres had also resulted in Aru being poorly positioned towards the back of the group. While Froome finished seventh, just a second behind Matthews, Aru was 25 seconds back.

Froome said: “It did help to know finish from two years ago, but I'm back in yellow because the team kept me at the front. Without their job, there's no way I could keep my position. In the last 500m, I heard shouting in radio, ‘push, push, push'… It's amazing to hear that. Every second here is worth fighting for. It is still so close.”