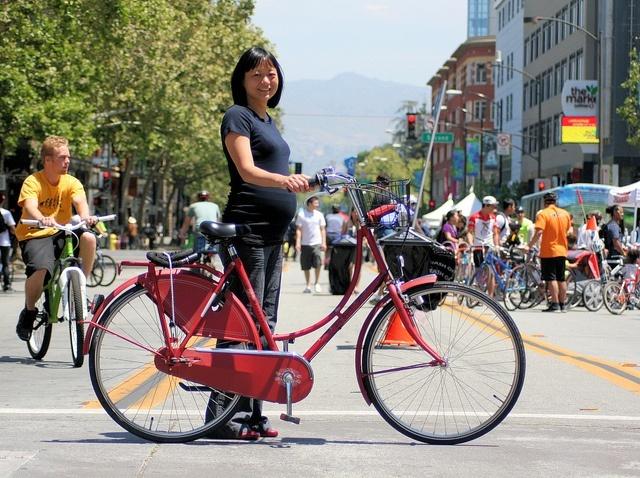 The benefits are clear - so what's standing in the way?...
by Sarah Barth

Overly cautious medical advice could be putting women off cycling in pregnancy, according to new research.

A recent study in the Journal of Transport & Health said a key reason for stopping was “ambiguously worded or overly-cautious advice from medical guidelines, midwives and obstetricians.”

But some clinicians say this means they miss out on the potential benefits of the active commute.

The NHS currently recommends daily exercise in pregnancy to reduce the risks of preeclampsia and improve mood.

"Despite the clear health benefits of cycling and the push to get more people commuting by bike, especially in cities like London, the medical advice on cycling during pregnancy remains murky," Davara Lee Bennett, the author of the new study, told News Medical.

"My research aimed to explore why women do - and don't - cycle to work when they're pregnant, with a view to supporting informed decision-making - including, if women so wish, rocking the rust off their chains, and bringing their bikes out from under the stairs and into the light."

Group discussions were with a group of women who had stopped cycling early, a group that had carried on into later pregnancy and a mixed group. S

Bennett recorded and transcribed the chats and some individual interviews to develop themes.

The main areas of concern were physical obstacles and enablers, perceptions of risk and of pregnancy itself, and advice.

Women who did cycle said they adjusted their cycling practices to minimize risk. Although some women had positive encounters with health professionals, the medical advice they received was often noncommittal or risk-averse.

"Understanding the obstacles to women's cycling during pregnancy can support the development of safer cycling infrastructure and informed medical guidelines, ultimately offering more women the opportunity to benefit from an active commute," said Bennett.

“By addressing some of the more socially prohibitive public discourses on the topic, I hope that my research will not just enable informed decision-making by women, but also encourage more constructive support and advice for women from health professionals.”

Back in 2009 we reported how exercise during pregnancy was linked to better foetal heart health and nervous system development.

This means women who continue to cycle while pregnant could be benefiting their unborn babies as well as themselves.

However, a team from the Kansas City University used stationary cycling rather than road cycling to achieve their findings among a panel of expectant mums.

And while the anecdotal evidence is that many cyclists continue to ride their bikes well into the final months of pregnancy, the Royal College of Obstetricians and Gynaecologists puts it in the same category as sports like skiing, because of the potential for falls.

RCOG official guidance on the matter is as follows: “Women are cautioned about the potential for loss of balance and foetal trauma if they participate in horseback riding, downhill skiing, ice hockey, gymnastics and cycling during pregnancy”

But a forum on the CTC’s website contains several examples of women who defied this guidance and said they achieved benefits from road cycling during pregnancy, some even continuing to go out on club runs.

The Kansas City University researchers wanted to see if maternal exercise had cardiovascular benefits for the foetus, according to a story on the BBC website.

The scientists used a non-invasive device to measure the magnetic fields produced by the electrical activity of maternal and foetal heart rates.

The women studied were aged between 20 and 35 and were checked between the 36th and 38th weeks of pregnancy.

They were classed as exercisers if they did moderate intensity aerobic exercise such as moderate to vigorous walking, stationary bicycling and running for at least 30 minutes, three times per week. Most were doing more.

The researchers then compared them with pregnant women who did not exercise regularly.

Dr Linda May, who led the study, said: "Foetal breathing movement and the nervous system were more mature in babies exposed to exercise."