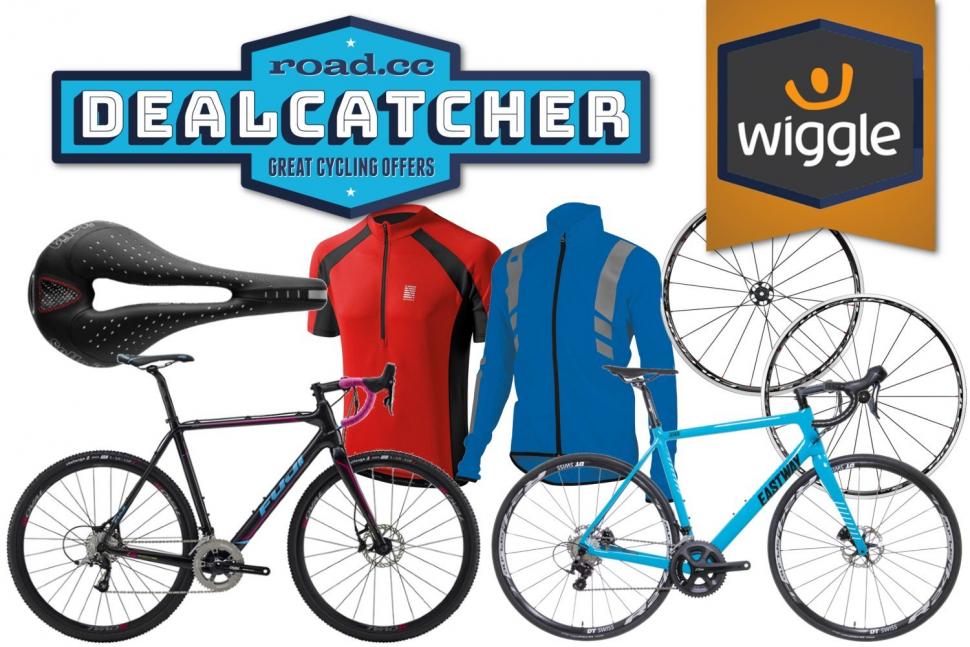 If you're after massive bike bargains and deals on all sorts of other bits of kit, the DealCatcher and Wiggle have got some treats for you!...
by Elliot Johnston

The DealCatcher's been over at Wiggle again today on the lookout for some more great cycling deals for you guys, and he's come back with an excellently bike-heavy haul.

The deals don't stop there. Altura's Airstream jersey has seen a huge 60% discount, Sportful's Reflex 2 jacket's had 51% sliced off its asking price, you can grab an alloy Fulcrum Racing clincher wheelset for 27% off and a Selle Italia saddle for a 34% discount.

So, what are you waiting for?

Fuji says that its Altamira bike is "any CX rider's dream bike."

Now we won't go quite as far as saying that, but it does appear to offer an attractive set of specifications.

As disc-equipped, carbon frame and fork-ed race-ready machine it ticks several boxes for those of you who like to get muddy and competitive in your drops.

SRAM's Rival groupset, Challenge Grifo tyres, and Oval 327 Alloy clincher wheels make up the bits of the bike that'll get you going over the tougher terrain.

Sure cyclocross season is over for this year, but as a rural commuting machine, or a bargain bike you'd like to take into next season, it's perfect.

If you're more interested in long gentle club rides than a super speedy cyclocross race Eastway's Zener D2 should sort you out.

A super lightweight carbon frame with excellently forgiving endurance geometry will give you a performance and comfort boost for your weekend rides.

Shimano's fantastic 105 groupset keeps things ticking over, while DT Swiss's R24 wheelset will keep you rolling in the right direction.

If you want a bit of weight from our review team to our advice that you consider Eastway's Zener range, our man Stu Kerton put the D1 through its paces and gave it an 8/10.

We've got a lot of time for Altura's jerseys here at road.cc. We've not specifically put the Airstream through it's paces, but the Peloton Jersey rolled away with a 9/10 review.

The airstream, though, has a little more aerodynamism going for it. So, if you're after a comfortable and good-looking performance boosting jersey, look no further.

Sportful's Reflex 2 Jacket, in it's yellow made its way into our best-of list for yellow cycling jackets.

While the jackets on offer here aren't yellow, the reasons the jacket made that list stand just as strong in blue.

Lightweight fabrics, streamlined fit, and 360-degree visible reflective details make this a wonderful option for cyclists looking to be seen in poor conditions.

Fulcrum's Racing 5 wheels are a fantastic low-cost option for cycling in rural areas and on non-perfect urban surfaces.

Particularly good for autumnal and winter riding conditions, Fulcrum's Racing 5s can pull off months of use in adverse conditions without even a single complaint.

So, if you're after a great pair of long-lasting cycling wheels these will see you right.

It hit highs of 8/10 road.cc reviews a few years back and not much has changed since.