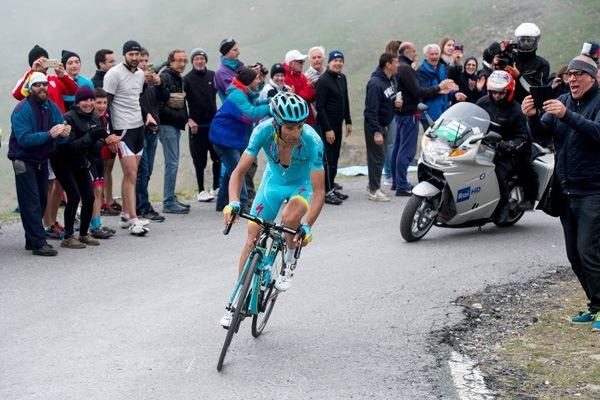 Michele Scarponi on an ascent during the Giro d'Italia (picture credit ANSA).jpg

Michele Scarponi, the 2011 Giro d’Italia champion who was killed last month when he was hit by a truck while training near his home, will be commemorated during this month’s 100th edition of the race, including by having the climb of the Mortirolo dedicated to his memory.

The 37-year-old had been due to lead Astana in the Italian Grand Tour, with the Kazakh team confirming at the weekend that it would start the race with eight riders instead of nine and that the race number Scarponi would have worn will not be used.

Today, Giro d’Italia organisers RCS Sport confirmed that the ascent of the Mortirolo on Stage 16 on 23 May would be named in honour of Scarponi, who attacked on the mountain in 2010 on the way to taking his third and final career stage win in the race.

They also said that the mountains classification points for the first rider over what will now be called the Scarponi Climb on the stage from Rovetta to Bormio will be double what was originally envisaged.

There will be a number of other initiatives during the three-week Grand Tour to pay tribute to the rider, whose death close to his home in Italy’s Marche region shocked the world of professional cycling.

His Astana team will be the first to be introduced at Thursday’s team presentation in Alghero on Sardinia, which hosts the first three stages of this year’s race, and a “special moment will be dedicated to his memory,” say organisers.

Ahead of the start of the opening stage on Friday, the peloton will observe a minute’s silence before Astana leads the bunch through the neutralised section of the race.

Scarponi was awarded the overall victory of the 2011 Giro d’Italia after Alberto Contador was stripped of the title as a result of his doping ban, and organisers have said he will also be remembered during the final podium celebrations in Milan at the end of the race.