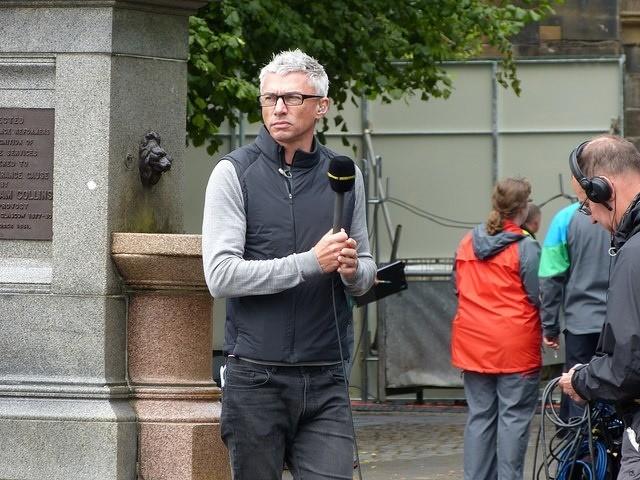 Jonathan Edwards at the 2014 women's time trial in Glasgow (CC licensed by brassyn via Flickr).jpg

Eurosport has announced that its coverage of this year’s Giro d’Italia and Tour de France will be fronted by broadcaster and former triple jumper, Jonathan Edwards.

Former Olympic champion, Edwards – who remains triple jump world record holder – took up cycling to keep fit when he retired in 2003. He also coached Pippa Middleton in 2014 when the two were trying to promote the sport as part of the Telegraph’s Get Slim Without The Gym initiative.

Edwards has worked for the BBC as both a commentator and presenter, covering the past four Olympic Games.

Speaking to The Telegraph in 2014 about how he was starting cover more cycling, he said: “Because I have a love of cycling I'm just a sponge for any knowledge, so when I'm with these guys I just pester them for information.”

Edwards moved to Eurosport this year as its exclusive lead presenter for flagship sports programming, including the Olympic Games.

He will be the on-site presenter at this year’s Giro d’Italia, which starts on May 5, and will be joined by top riders and pro team staff.

Edwards said: "Cycling is a huge passion of mine, both as a fan and a committed rider whenever I get the opportunity, so I’m incredibly excited to join Eurosport’s cycling team for the first two prestigious Grand Tours of the season. It’s another exciting chapter in my journey with the Eurosport team and the first stage in Sardinia can’t come too soon."

The Giro will also see former Dimension Data general manager Brian Smith taking on a new role as ‘The Coach,’ guiding fans through the more technical aspects of the stage and analysing significant attacks and sprint finishes.