We look at the new F series and AR series bikes, plus a few others from the Felt range
by dave atkinson

The big news from Felt is that their F Series of race bikes has been redesigned for 2011, the range-topping F1 frame being 100g lighter and 35% stiffer than previously, according to the US manufacturer. A complete bike weighs in at 13.7lb (6.2kg) – well under the UCI’s 14.96lb (6.8kg) legal limit for racing.

Lighter and stiffer? We know what you’re thinking: that’s the same as every other speed machine on the planet. Well, don’t be so cynical! Felt have actually changed a lot here, starting with the production process. They’re calling the new frame a Dynamic Monocoque Construction.

What does that mean? The different sections of the frame are moulded separately with an internal bladder pushing the carbon fibre firmly into the mould – which sounds to us a lot like the technology that Trek use to build their Madone, for example. Custom polyurethane inserts are placed inside the tubes during the moulding process, avoiding any excess material and so keeping the weight down.

Then the various sections are bonded together and wrapped. It’s a complex process but the result is a frameset that weighs in at under 800g – according to Felt’s figures. We asked Felt's President Bill Duehring to talks us through the process...

There are nine models in the F Series using various different materials. The F1 is made from UHC Ultimate+Nano carbon fibre, which is ultra-high modulus carbon blended with a propriety resin matrix that produces a stronger than usual bond between the fibres. There are a couple of less expensive carbon mixes available too, along with an aluminium alloy model that has exactly the same silhouette. You’d be hard pressed to tell it’s alu, to be honest. 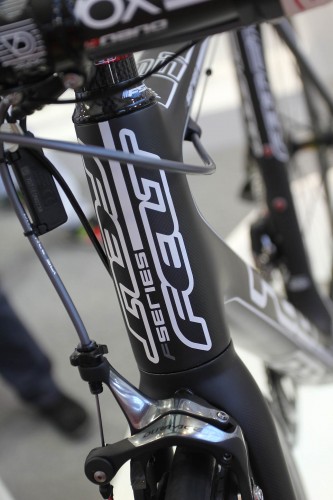 All of the F Series bikes come with ControlTaper head tubes – a 1 1/8in upper bearing and 1 1/2in at the bottom for increased front-end stiffness and steering precision. There’s a huge trend in this direction among the key manufacturers now – even more so than previously. They all get an oversized BB30 bottom bracket for more rigidity and less weight, and they’re capable of accepting either Shimano’s Di2 electronic shifting or standard cables – swapping from ports to cable stops, or the other way around, is just an Allen key job. To give you an idea of the pricing, the aluminium F75, which comes in a Shimano 105 build, will retail at £1,850. The F3, which is the least expensive bike to use the UHC material, will be around £3,200. This model comes with a SRAM Red groupset and SRAM S30 al wheels. You can expect them to be available in the UK from November. 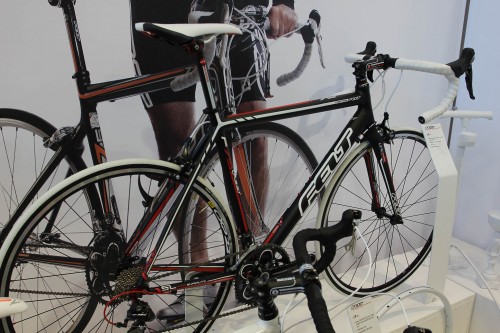 In other news from Felt, the aerodynamic AR bikes get ‘InsideOut’ moulding technology too – the polyurethane bladder technique is used at every joint, allowing less carbon fibre and less resin to be used. This results in a 150g saving on a 56cm frame, taking the weight down to just over 1,100g. We love the stealthy look of the AR0 which uses nano technology and comes equipped with Shimano Di2 shifting and Zipp 404 wheels. We don’t know the price yet, but you’d better get saving – we don’t expect this one to be cheap.

Aside from their sporty road bikes, Felt’s £650 Curbside 6061 aluminium fixie/singlespeed is still a head turner. As well as the sweeeeet looks, you get rack and mudguard mounts for commuting practicality and a one-piece stem/handlebar that comes with knurled ends rather than standard grips. We’re guessing that’s going to be really cold on frosty mornings so you might want to invest in some burly gloves come winter. And those Yanks really need to learn how to spell ‘Kerbside’. 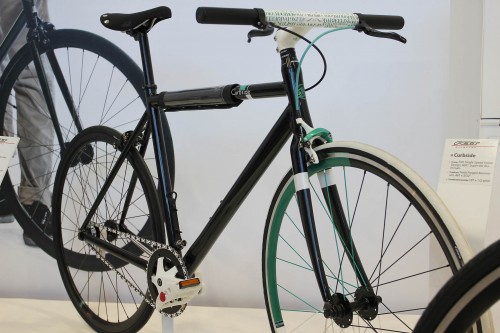 Continuing the fixed theme, the custom-butted 4130 steel Brougham (£475) has a track geometry and skinny bars, and is designed for nipping around time in double-quick time. It looks cool to us too.