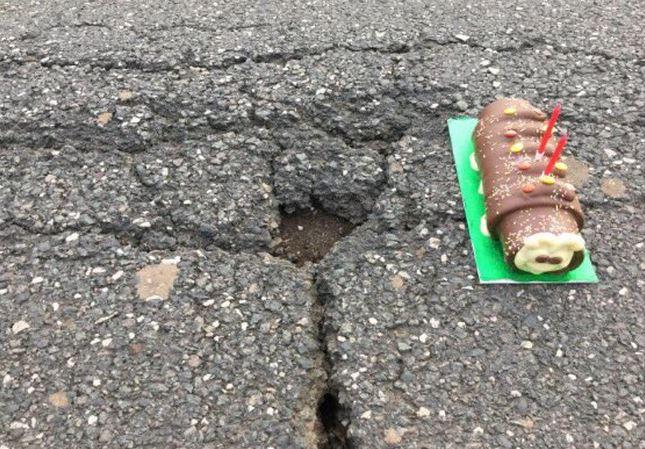 Residents of a village in Nottinghamshire have held a birthday, including a cake with candles, for a pothole that has gone unrepaired despite complaints being made about it to the local council for two years now.

She publicised the lack of action by the council by placing a cake next to the pothole and posting a picture to the @PlumtreePeople account on Twitter.

The picture went viral after being picked up by various media outlets as well as getting highlighted by the broadcaster, Jeremy Vine, who wrote on Twitter: “In no other country would you get a birthday party for a pothole.”

The #Plumtree potholes mark yet another birthday .. pic.twitter.com/YsRAAF03v3

Ms Daykin said: “I nearly put three candles on but I thought that might be pushing it.

“It’s dangerous for people who drive, and who cycle, because if you come to a pothole you have to swerve out in to the road which makes it unsafe for everyone.

“I last complained back in September or October time last year and they came and said they weren’t bad enough to fix.”

“I’ve lived around Plumtree all my life and the roads are definitely the worst they have been at the moment.”

The county council, which is responsible for the road, has been allocated £1.2 million of government money to repair potholes. It has referred the issue to its roads maintenance contractor, Via East Midlands.

The contractor told Notts TV: “We take the quality of highways surfaces in Nottinghamshire very seriously and use inspections to prioritise our planned maintenance works and make any critical repairs as needed.

“In this particular case, we inspect this road monthly as it is classed as a ‘C’ road and any defects that are considered a hazard are identified for repair.

“We have a number of enquiries recorded from this caller with each one resulting in an inspection.”

We’ve reported on a number of examples of people taking a creative approach to try and make highways authorities take action over potholes.

Perhaps the most notorious is a man in Greater Manchester who styled himself ‘Wanksy’ and painted penises on potholes to try and shame the local authority into repairing them.

Cycling UK’s Fillthathole.org.uk website and app enables people to report potholes directly to the relevant authority and also ranks them by how quickly they respond.