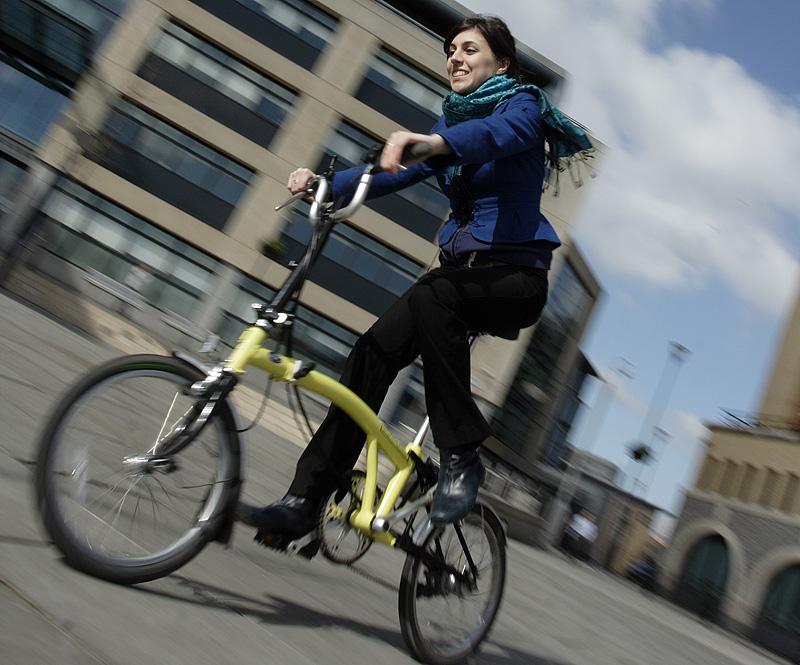 Hire a Brompton and save the planet, or at least do your bit, save money and get fitter too
by Tony Farrelly

South West Trains and Brompton Bicycles today launched a bike hire scheme which they hope will encourage bicycle use amongst rail passengers. There's extra encouragement for some of South West Trains' season ticket holders who have been invited to take part in a free three month trial of the new scheme.

The CTC is all in favour too so this morning at London Waterloo station Stagecoach Group Chief Executive Brian Souter launched the new service, joined by Will Butler-Adams, Managing Director of Brompton Bicycle, passengers taking part in the trial and Dave Holladay of CTC.

Passengers will be able to hire the South West Trains’ branded Brompton bicycles from the Lost Property Office at Waterloo station.

Will it work? Well the idea for the scheme came as a result of research into passenger's attitudes by Stagecoach the company that operates South West Trains. They have now surveyed 13,000 people across the UK, including those in the South West Trains’ operating area.

According to Stagecoach boss, Brian Souter:  “Our extensive consumer research around the UK has found that environmental concerns are growing. People are looking for travel choices that will help reduce their carbon footprint and contribute to a healthier lifestyle.

“Cycling is growing in popularity and many people are now looking to get on their bikes as part of an integrated trip that also involves using trains or buses. We hope this innovative initiative will make it easier for people to take the greener smarter travel option, stay healthy and help save the planet.”

While it might be tempting to dismiss the idea that a few more people hiring Bromptons is going to save the planet every little helps, and this scheme is a welcome sign that large train operators are taking notice of the rise of cycling as a means of transport amongst their passengers and the vital part it has to play in an integrated transport system… better late than never. A bit like trains.

Dave Holladay, CTC’s Public Transport Adviser highlighted the key benefits: “It’s quicker and cheaper to combine cycling with commuting by train. Cycling delivers a reliable and consistent connection and you can cycle to most destinations in Central London within around 15 mintes of your train arriving at Waterloo. It also saves you money as you no longer have the costs of fuel, car parking or a zone 1 Travelcard.”