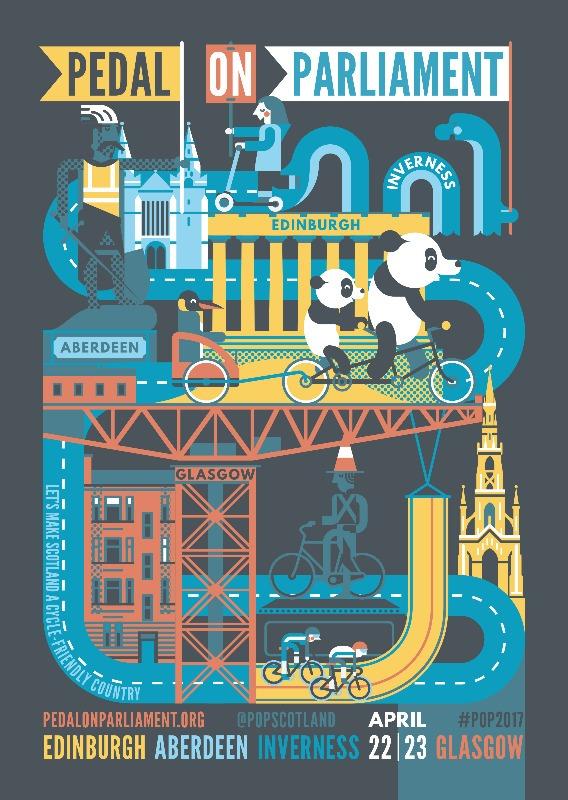 Pedal on Parliament to hold family-friendly protests in Aberdeen, Edinburgh, Inverness and Glasgow next month

Thanks to the success of an ongoing crowdfunding campaign, this year Pedal on Parliament demonstrations will be held not just in Edinburgh and Aberdeen, but also in Glasgow and Inverness.

Pedal on Parliament is a grassroots cycling campaign that each year brings thousands of cyclists to the streets to call for a cycle-friendly Scotland.

“We want our local politicians to support active travel in our communities, so that we can live in a healthier and happier Scotland.

“We'd like our roads and streets to work for everybody, instead of only occasionally just about working for those who are driving a car.”

The Pedal on Parliament bike demonstrations will be held in Edinburgh, Aberdeen and Inverness on April 22; and in Glasgow on April 23.

As well as increasing the numbers of flyers, flags and posters, the organisers are looking to hire sound systems for the rallies outside Holyrood in Edinburgh and City Chambers in Glasgow and also get a stage up in Glasgow's George Square.

To try and achieve this, they’ve set up a Crowdfunder page and have so far raised just over £3,300 of a £5,000 stretch target, having hit the original fundraising target of £3,000 in just over a week.

The rewards for donating include T-shirts, posters, a year’s membership to the nextbike hire scheme, ‘a personal tour of East Dunbartonshire’s mean streets’ by helmet cam cyclist Magnatom, and an appearance in a video created by mysterious cycle campaigner, Bike Gob.

Julian Scriven, Managing Director of nextbike UK said: "As the leading cycle hire provider in Scotland, we are committed in getting more people on bikes and cycling across the country.

“Already more than 20,000 people in Scotland are members of nextbike, and we aim to increase this number as we expand throughout the country, but for cycle hire to be successful we would like to see further support from the government in terms of long-term thinking – roads have to re-designed to ensure safety of all road users."

Dr Dave Brennan, the man behind the popular Magnatom YouTube channel and one of the original organisers of Pedal on Parliament, added: “We’re delighted to get the support of private companies like nextbike, which shows that cycling isn’t just about keeping healthy and saving the planet – it’s a route to economic prosperity too.

“We run Pedal on Parliament on a shoestring, but taking the message right across Scotland – not just to the politicians in Holyrood – takes more money. With nextbike’s support – and donations from our supporters – we hope that we can get the word out to everyone who’d like to see safer cycling conditions for themselves and their loved ones in Scotland.”