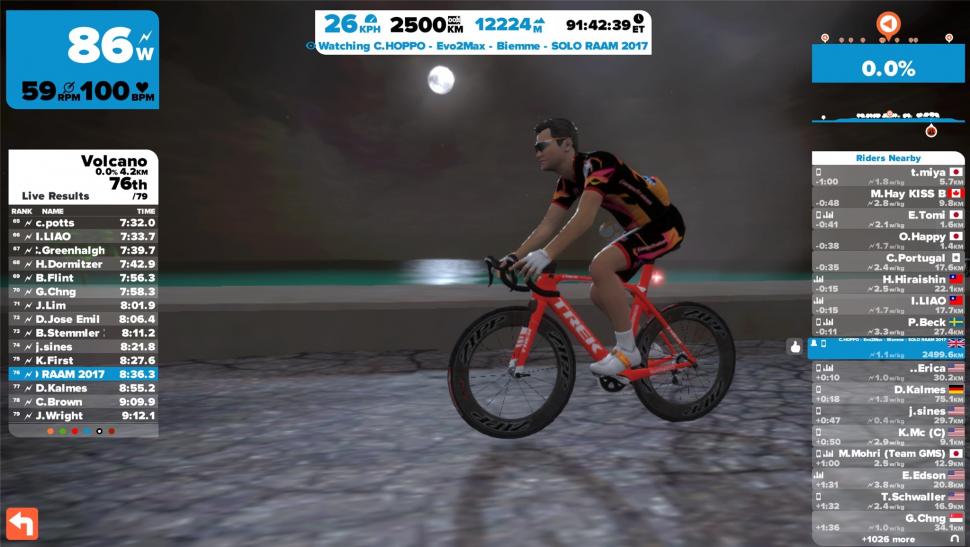 Ultracyclist is in training for this summer's Race Across America...
by Simon_MacMichael

Chris ‘Hoppo’ Hopkinson has this morning clocked up 2,500 kilometres (1,553 miles) on a single ride on Zwift – and it’s taken the ultracyclist less than 100 hours to rack up that formidable distance on his turbo trainer.

Last December, Hopkinson – who developed a passion for long-distance cycling after starting to commute by bike at the age of 31 in 1998 – set a record distance on the computer-based home training system when he rode 1,626 kilometres (1,010 miles) in the virtual world of Zwift in 72 hours.

His record was broken last month by Dutch born but London-based cyclist Jasmijn Muller, who rode 1,828 kilometres (1,136 miles) in the same time.

> Jasmijn Muller beats Zwift distance record of more than 1,000 miles - in a little over two days

Hopkinson took a shade under 91 hours 54 minutes to hit 2,500 kilometres in his latest effort.

Like Muller, who is attempting to break the Land’s End to John O’Groats record later this year, Hopkinson’s ride is part of his preparation for a specific goal later this year – a sign that evolving technology, both computer-based and within trainers themselves, is increasingly being harnessed by ultracyclists as part of their training plans.

Hopkinson was the first Briton to complete the Race Across America solo, and he’s finished the race twice since.

This summer, he’ll be having another crack at the 3,000-mile coast-to-coast race from Oceanside, California to Annapolis Maryland.

Another cyclist we’ve seen use a smart trainer as part of his training for an ultracycling event recently is Denmark’s Michael Knudsen, who in January spent a week ‘climbing’ the equivalent height of the highest summit on each of the world’s seven continents.