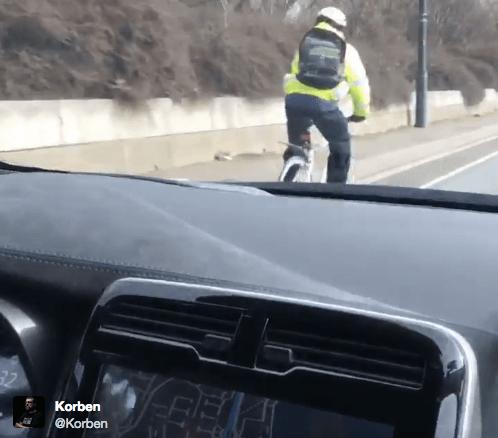 'I was a little scared for him', says nervous passenger...
by Sarah Barth

A journalist from France has caught on camera the moment a Nissan driverless car passes a cyclist without leaving enough space.

The video, shot in London as Nissan showcased its driverless progress, shows how the car’s console registers the cyclist, but then fails to move over to give him space.

Tetsuya Iijima, global head of autonomous drive development at Nissan, is behind the wheel, but fails to over-ride the car and move out either, the video, spotted by BikeBiz, shows.

One of the French journalists in the car can be heard saying: ”I was a little scared for him"  in French.

Last year we reported how Adrian Lord, of the transport consultancy Phil Jones Associates, fears that once technology that prevents pedestrians and cyclists from being hit by vehicles makes it to our roads, it opens the door for vulnerable road users to take advantage of the impossibility of being injured.

He said: "Once people realise that an autonomous vehicle will stop [automatically], will pedestrians and cyclists deliberately take advantage and step out or cycle in front of them?

“If that’s the case, how long would such a vehicle take to drive down Oxford Street or any other busy urban high street?”

Meanwhile professor of transport engineering at the University of the West of England, John Parkin, told the Financial Times (link is external) that much of the infrastructure that's being implemented to keep bikes and cars apart in inner-city environments, will be made redundant by autonomous technology reaching maturity.

"When fewer cars are driven by humans, in cities at least," the professor said. "There would be less need to segregate cyclists from traffic. This would allow roads to be designed as more open, shared spaces."