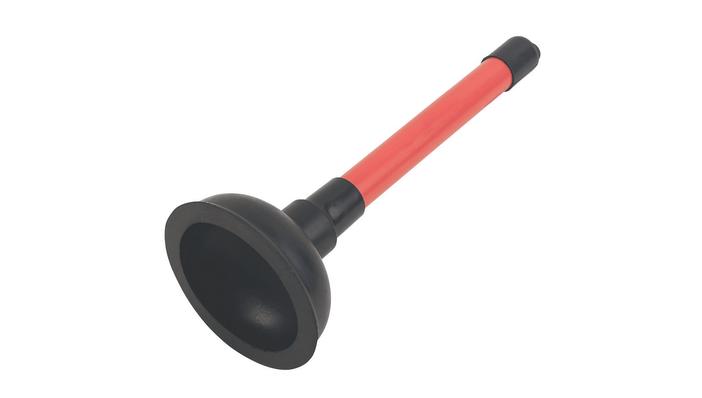 Plumbing tool pressed into service in Wichita, Kansas at junction where motorists encroach on cycle lane
by Simon_MacMichael

We’ve seen cycling campaigners deploy paint and traffic cones in their efforts to persuade city authorities to roll out decent cycling infrastructure, but here’s a first – an existing cycle lane that has been given soft segregation from motor traffic with the help of toilet plungers.

They appeared in the city of Wichita, Kansas, either side of a cycle lane that is in the centre of the carriageway with motor traffic on either side, but according to KSN News, no-one knows who put them there.

The toilet plungers, covered with reflective tape and similar to the type of soft segregation known as ‘wands’ that are often used to help protect cycle lanes, were spotted by local cyclist Tom Ramsey, reports Nextcity.org.

He said that even though motorists are not allowed into the bike lane, which is delineated by solid white lines, they often move into it ahead of turning at the junction – a likely explanation for why activists decided to put the guerrilla infrastructure in place.

As a story we reported on from San Francisco last year showed, such initiatives can force those responsible for roads to take steps to improve the safety of people on bikes.

A group calling itself the San Francisco Transformation Agency (SFMTrA) installed first traffic cones, then soft-hit posts – similar to wands – on a bike lane on the city’s Folsom Street as a means of highlighting that greater protection was needed.

The San Francisco Municipal Transportation Agency (SFMTA) which is responsible for the city’s streets and had earlier removed the cones, said it would leave the posts in place and eventually install its own.

Last year also saw the Aussie soap Neighbours run a plotline involving guerrilla bike lanes when, in response to a hit-and-run collision involving a child on a bike, longstanding character Dr Karl Kennedy painted his own cycle lane on the street, mirroring initiatives that have been undertaken by campaigners in the real world.

An episode of the long-running show depicted Dr Kennedy broadcasting on social media, where he said: “Normally I would not condone guerrilla action, but the cyclists of Erinsborough – both old and young – deserve to be safe.”