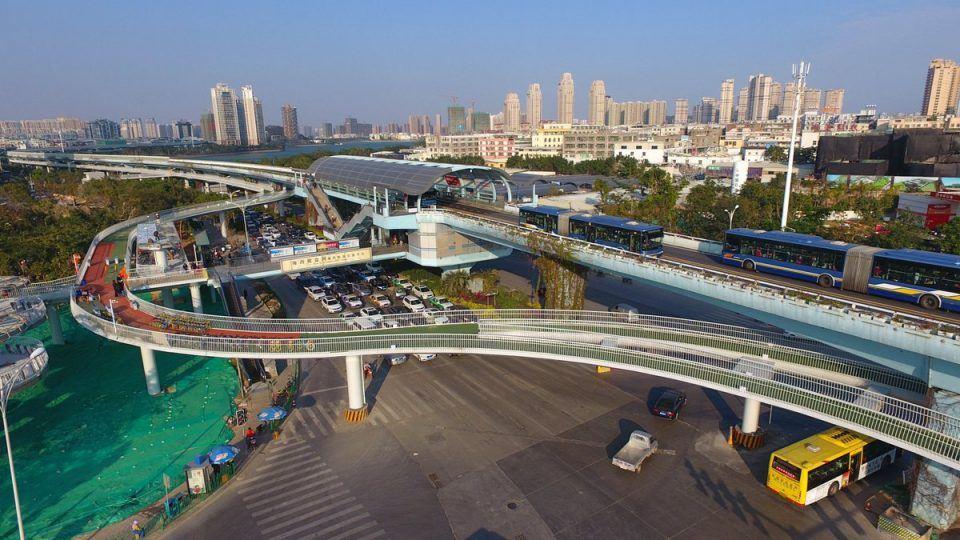 Longest elevated cycle path in the world opens in China

The longest elevated bike path in the world has been opened in the Chinese city of Xiamen.

Dubbed "the winding viaduct" by Chinese news agency Xinhau, the route is predicted to spur a cycling infrastructure revolution across the country.

Standing at five miles long and 16 feet wide, large sections of the route sit underneath an elevated motor vehicle expressway offering shelter from the elements for the 2,023 cyclists the route can carry per hour.

The route is set to be open from 6.30am to 10.30pm during an initial month-long trial period, and individuals who are without bicycles can hire one of 300 hire bikes along the route.

Alongside cycle hire stations the route will feature bike servicing pavilions and plenty of bicycle parking for privately owned bicycles.

The route's resemblance to the widely praised Danish Bicycle Snake cycle route that carries cyclists across Copenhagen's harbour is no surprise. The architecture firm responsible for "the winding viaduct" is Copenhagen-based firm Dissing + Weitling, known for the creation of landmark bridges and, of course, the Bicycle Snake.

One of the largest differences between the Copenhagen bridge and the Chinese "viaduct," other than the distance covered, is how long the two projects took to complete. Copenhagen's Bicycle Snake was bogged down in disputes for eight years before it was completed, while the elevated route in Xiamen took less than a year to go from planning to completion.

The route itself is said to cover the city's five major residential areas and three business centres. There are 11 entrances onto the path which connect to 11 bus stops and two underground rail stations. 30,000 lights will also illuminate the path when night falls, and automated gates will help control flow if the route exceeds its capacity.

Local residents are already praising the project, one resident told Xinhau news agency that he had to put his fears aside to try the cycle route, but he's glad he did.

"I'm a little bit afraid of the height, so I thought I would dare not ride on it. But today I found the guardrail made me feel safe," Wu Xueying told Xinhau.

"It's nice to ride a bicycle under the blue sky in the sunshine."

While others have been pleased with the efficiency of the route.

Chen Yimen, another local resident, told Xinhau: "I tried today, and it took 10 minutes from my home to my workplace, which is the same as when I was driving."

If Boris Johnson and famous British architect Lord Norman Foster had their way back in 2013, we might not be looking at a five-mile stretch of elevated cycle path in a south-eastern Chinese city for the world record.

A collaboration with Network Rail was proposed by Lord Foster back in 2013 to create 135 miles of elevated cycle routes above the city's railways.

The plans included ten routes and 209 access ramps at a height of three storey building, and were predicted to adopt the name "SkyCycle".