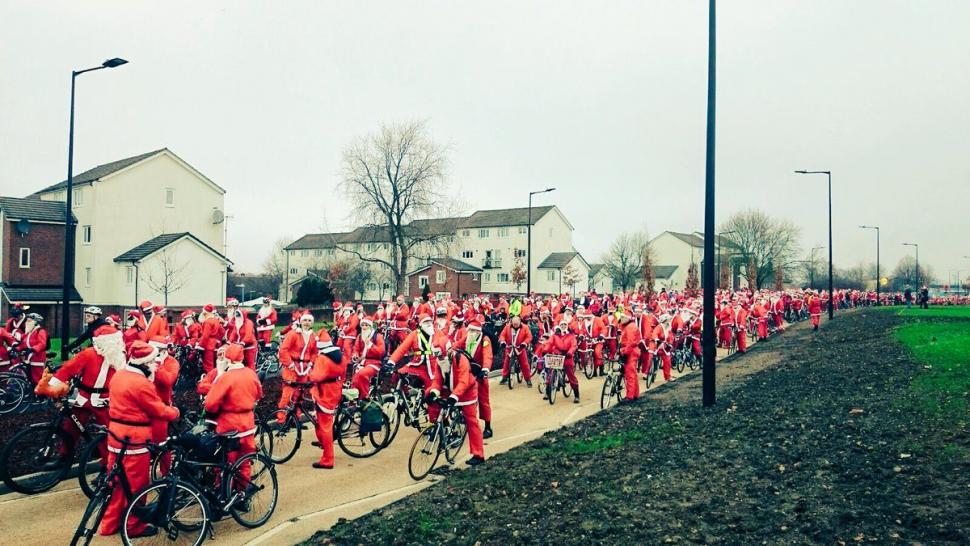 Contractors held mass participation event to say "thank you" to locals...
by Simon_MacMichael

Hundreds of people dressed in Santa outfits took to the new South Bristol Link road on their bikes on Sunday ahead of its official opening after Christmas.

The mass participation ride was organised by contractors Alun Griffiths as a “thank you” to local residents, says the website Better By Bike, launched to mark Bristol’s designation as the UK’s first “Cycling City” under a government scheme in 2008.

The ride took place on Sunday on a 4.5km section of the road from the Gatehouse Centre in Bishopsworth, Bristol to the junction with the A370 in North Somerset.

The route continued for a further kilometre to Ashton Court, with mince pies and other refreshments offered to participants on the family-friendly ride on traffic-free roads, and a Welsh male voice choir providing entertainment.

While the cycle path alongside the road is open now, the main carriageway where the cycling Santas rode today will be closed to motor vehicles until the New Year.

It was built by Alun Griffiths Contractors, whose regional project manager, Simon Dunn, told BBC News: "It'll make it easier for the traffic to get to the airport.

"The last thing we want to do is open the road just before Christmas and there are any concerns or any issues," said Mr Dunn

"The sensible thing to do is to leave it until January, do the safety checks and then open it."

But Tony Dyer, prospective Green Party parliamentary candidate for Bristol South, questioned why the £45 million road was built at all.

He said: "Part of it goes through green belt and we're not convinced it's going to make a major difference to traffic.

"It will work for a small section of it but our other concern is how it's going to drive more demand for yet more roads."