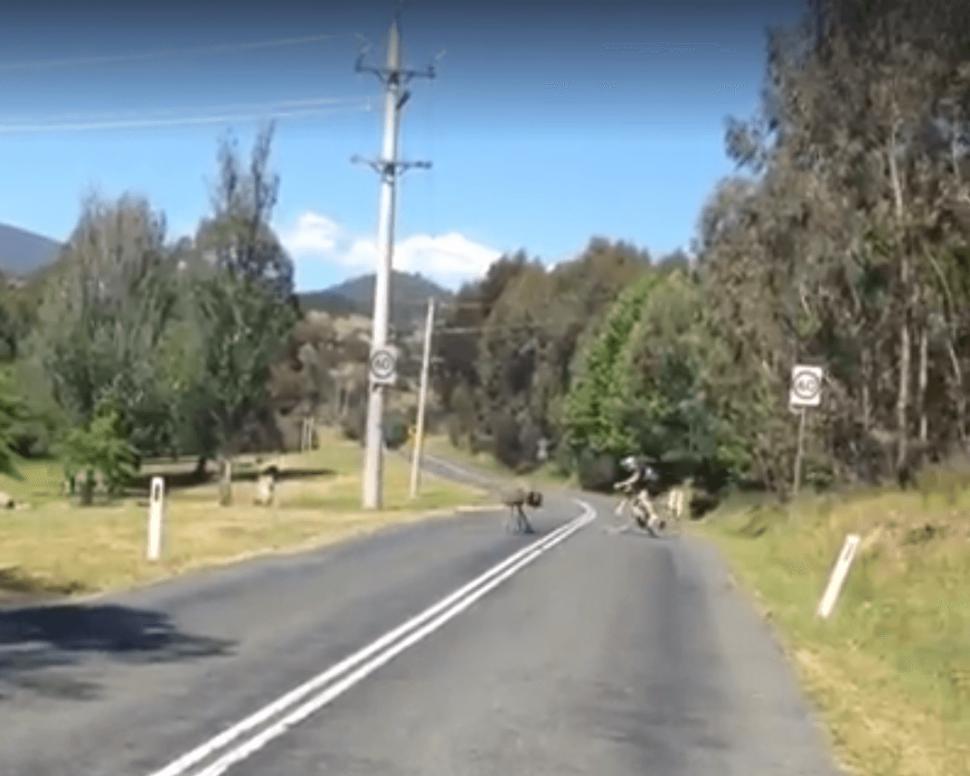 This time of year Aussie cyclists are used to bracing themselves against dive bombing magpies protecting nest sites.

Now, a couple of rogue emus have joined the fray, filmed chasing two cyclists in Canberra yesterday. Chris Wilson, who captured the incident, was pursued by one of the birds, before he filmed it going after a second cyclist, Kevin Wells.

Wells can be seen pedalling away as the enormous bird briefly pursues him, making a noise with its throat to hammer the point home.

“There were two [emus],” wrote Wilson on Facebook. “I stopped to get a photo and this one started running at me, making a thumping noise with its threat [throat] and extending its neck really high to intimidate me ... it worked.”

“Then I stopped and filmed this guy trying to get through. I had to edit out my chuckle at the end because I thought you all may consider me cruel.”

An adult emu can grow to 2m in height, and weigh up to 45kg. Its top speed is 50kph. Luckily this one, on Paddy’s River Road, on the edge of Pierces Creek Forest, made a cursory chase of Wells before giving up.

“Must admit I did not really think much more of it and continued my ride,” said Wells.

Although he was cool about the interaction itself, he did name his 91km Sunday ride Emu stop chasing me!!! in honour of the enormous, irate bird.

Wilson defended the emu’s behaviour as natural instinct and reminded Aussie cyclists to be respectful of the birds and admire them from a distance.

“I don't think this emu is a menace at all. I've seen emus in captivity, but it was a thrill to be able to see how this one reacted with its natural instincts,” he said. “I encroached on it's terriroty to try and get a photo and it reacted like a celebrity getting hounded by the paparazzi. Fair enough too. You can safely watch these birds, just give them a respectful distance.”

According to Australia Zoo, between April and November is breeding season for emus, so it’s possible the bird was acting to protect a nest site or its young. Females are known to make a booming noise during breeding season.