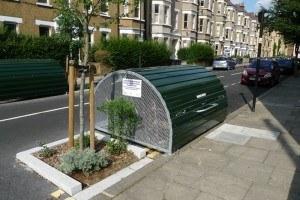 A council plans to install 60 secure bike parking “hangars” on its streets in a bid to get more people travelling by two wheels, and is calling on residents to nominate their own streets.

Bike hangars, covered bike parking units that can hold up to six bicycles, replacing one car parking space, have been “hugely popular” in Waltham Forest, according to one councillor..

While residents who drive are concerned they will need to park further from their homes once the hangars are installed campaigners say around half of all households where the hangars are proposed don't own cars and there is a waiting list in most cases.

"I'm currently working on plans for the installation of another 60 residents cycle hangars across Waltham Forest. These will join the hugely popular 60 already deployed.

“Are you interested in having one in your road or street? Are your neighbours interested too? If so then please email me urgently a location and numbers interested so I can try and get it onto the list!"

Waltham Forest is one of three outer London boroughs which received more than £30m to create a “mini Holland” cycling and walking friendly showcase to encourage people to use their cars less. The borough has one of the lowest car ownership rates in the whole country.

Lambeth Bike Hangars, made by London-based company Cyclehoop are covered, lockable bike parking which use the equivalent of one car parking space, and can store up to six bicycles. Local councils in London, including Hackney, charge residents an annual rental fee for a space in one of the hangars. Waltham Forest council has already installed 60 bike hangars on its streets, and the second installation wave will double that number.

Some local residents have raised concerns over the loss of car parking spaces. Maria Harper told the East London and West Essex Guardian some nights she had to park two streets away from her home. She said: “I don’t expect to park outside my home but on the same block would be nice, it is not easy with three young kids.”

Jack Noble said: “I am a cyclist and I would normally welcome this, but parking in our road has become farcical.

“The other night I had to park three streets away.”

Another resident, Philip Herlihy, told the newspaper: “The motivation to nudge us all to lean away from cars and towards clean, healthy sustainable cycling is an honourable one.”

“Mini-Holland was originally touted as making cycling safer and easier.

“These deliver on that, with minimal impact on anyone else.”

Waltham Forest has the 333rd lowest rate of car ownership out of 348 local authorities in England and Wales.

The London Cycling Campaign's infrastructure campaigner, Simon Munk said: "Cycle hangars are proving hugely popular, and not just in Waltham Forest. In just about every borough that uses them there tends to be a long waiting list for spaces in them. Waltham Forest is obviously moving forward faster than most boroughs in fulfilling that demand – but most streets still don’t have one hangar; and less than a handful, where demand is very high, have two.

"Every hangar is already filled when it’s installed, with a waiting list of other properties on that street. And each hangar takes up less space than a car. Given this, the furore in some quarters about their installation is rather puzzling.

"Around half of all households in the areas of Waltham Forest where these are being installed have no access to a car. A parking permit for a car generally costs less than six people paying for the smaller space in a hangar in the borough too. So the issue isn’t really six households where residents no longer have to hike bikes up and down stairs or through houses – making them more convenient to use and enabling more people to cycle more. The issue is too many people with cars, and too many people with multiple cars in their household. That problem is exacerbated on streets without a Controlled Parking Zone (CPZ) – which are often clogged up with extra cars.

"In other words, if one person has to park two streets away from their front door – it’s not because of a bike hangar – it’s because they likely don’t have a CPZ and there are too many people parking cars in their street."

London Cycling Commissioner, Andrew Gilligan, told road.cc last year: “About 75% of all journeys to Walthamstow town centre are not made by car, and yet the streets of Walthamstow, until recently, were dominated by the 25% of people, and we’re just shifting that balance a bit, we’re shifting it a tiny bit back in favour of the majority who don’t drive every day.”