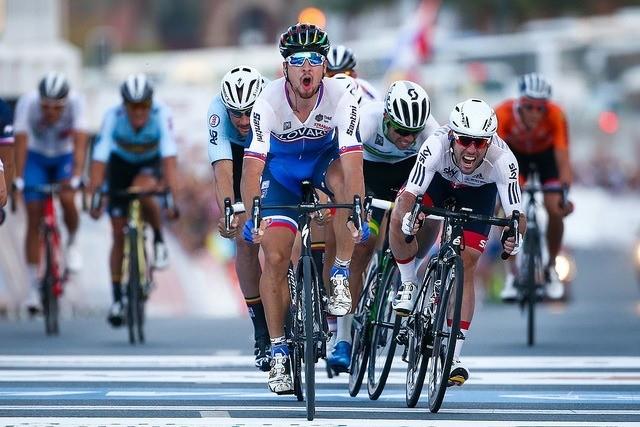 "I messed up tactically," says British rider after Peter Sagan edged him out...
by Simon_MacMichael

Mark Cavendish says he is "disappointed" at missing out on a second road world championships victory in Doha today after finishing second to defending champion Peter Sagan of Slovakia.

The British rider, whose previous road world title came in Copenhagen in 2011, was bidding to be the first man ever to win rainbow jerseys on the track and the road in the same year, having won the Madison with Sir Bradley Wiggins at the track world championships at the Lea Valley VeloPark in March.

He helped create the decisive move of today's race by taking advantage of a crosswind with 175 kilometres still to ride, and slugged it out for the win with Sagan, with Belgium's Tom Boonen third - all three men seeking the second road world title of their career.

But in a hard fought finale Cavendish had to check his pace as he got caught briefly behind Australia's Michael Matthews, while Sagan later admitted that he had risked crashing with Giacomo Nizzolo by going through a gap between the Italian and the barriers.

Cavendish told BBC Sport: "I am just disappointed I messed up tactically,.

"I came with so much speed and power. I wanted to be on Peter's wheel.

"I knew the Norwegians [Edvald Boasson Hagen and Alexander Kristoff] would hit out early into the headwind and I knew Sagan would just get the right wheel and I could float off him.

"I told Adam [Blythe] to come with a few hundred metres to go and when he came alongside, it spread everyone and everyone jumped and I had nowhere to go.

"The hard thing was losing Luke Rowe to a puncture which would have given us three in the front and he would have been valuable at the end. I am just going to have to settle for another second this year," added Cavendish, whose other big goal for 2016, the Omnium at the Rio Olympics, ended with him taking the silver medal behind Italy's Elia Viviani.

Sagan, the first man to retain the world title since Italy's Paolo Bettini in 2007, and only the sixth rider ever to do so, said afterwards: “I'm very happy because there was a crosswind and I was the last one to make the first group.

“In the end, it came down to a bunch sprint. There was a bit of a headwind so I felt I needed to come from the back. I felt I was lucky because Nizzolo didn’t close me out.

1
"Tired of road crime": CyclingMikey on episode 16 of the road.cc Podcast, plus how to make the most of your lunchbreak
2
TV surgeon and cyclist killed after collision with motorist in Essex
3
Brompton drops its ‘lightest bike ever’: new 7.45kg titanium version of iconic folding bike revealed
4
Near Miss of the Day 701: Speeding bus driver “very lucky” to avoid prosecution for close pass (includes swearing)
5
Stages will retrofit a power meter to your existing cranks
6
Apeman promises "all in one cycling safety solution" with new Seeker action camera featuring 'rearview e-mirror'
7
Near Miss of the Day 699: Roundabout close pass from driver speeding off slip road
8
Here’s why the bike shortage isn’t going away any time soon