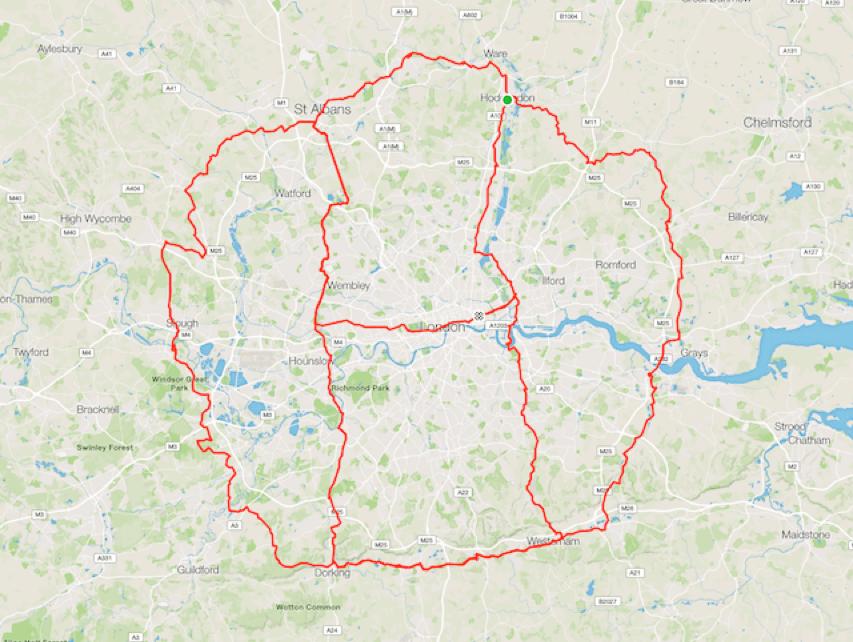 Among other things, London Air Ambulance provides pre-hospital medical care at the scene of road traffic collisions
by Alex Bowden

A group of cyclists put together by the Leigh Day law firm’s cycling claims team has completed a 315-mile trip around and through the City of London. Travelling around the M25 and through the boroughs and centre of London, the team drew a giant helipad to raise money for London’s Air Ambulance (LAA).

Six riders started in Hoddesdon in Hertfordshire at 7.15pm on Thursday September 22. They rode clockwise around the outside of the M25 and then used the cycling infrastructure of central London to design the H, before finishing at The Royal London Hospital at 9.05pm on Friday September 23.

A combination of distance and mechanicals meant only three riders completed the full route, including Grant Incles, the head of the Leigh Day cycling team in London and solicitor Rory McCarron, who is also from the team. They were given support by other members of Leigh Day and a few friends of the firm, including Martin Porter QC.

The three riders to complete the route spent 20 hours in the saddle. Full details of the ride can be seen on Strava.

“We really wanted to do something to show our thanks for the work that London’s Air Ambulance does and this felt like a unique way to put our appreciation on the map.

“However, we couldn’t know just what a massive task we had taken on, we lost a few cyclists to broken bikes and the exhaustion of riding for a full day and night without sleep.

“We would like to thank everyone who supported us and those who have sponsored us, people can still donate to support the Air Ambulance which saves so many lives every year.”