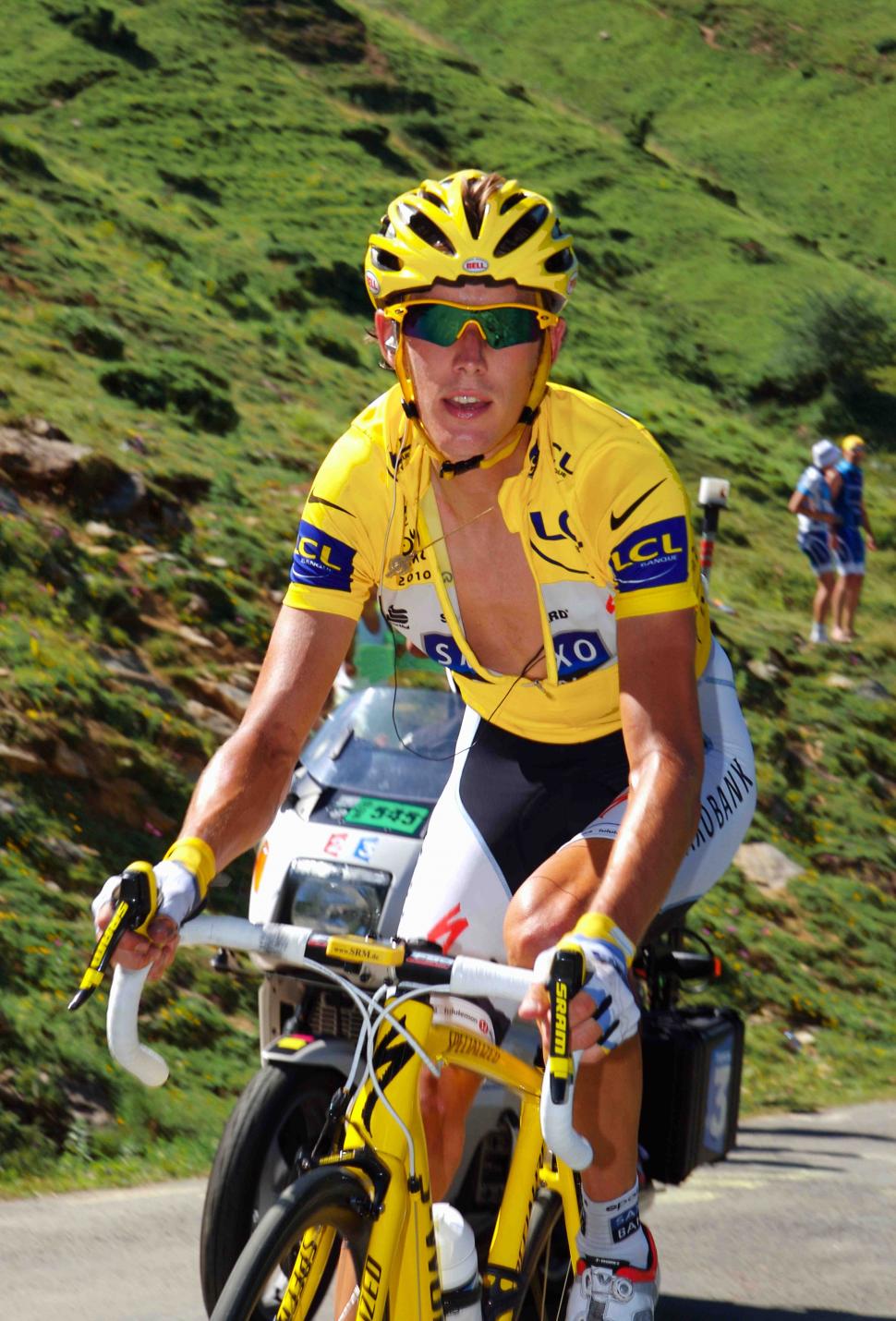 Saxo Bank star to go on attack on Tourmalet tomorrow, but can he take Contador?
by Simon_MacMichael

Andy Schleck has conceded that his only hope of beating Alberto Contador in this year’s Tour de France is to attack him on the way to the summit finish on the Col du Tourmalet tomorrow, as he seeks not only to make up the eight second deficit he incurred after Tuesday’s notorious Chaingate incident, but also build a sufficient cushion to counter the Astana rider’s expected superiority in Saturday’s time trial.

During Monday'’s Stage 15, Schleck attacked Contador on the day’s final climb, the Port de Balès, catching the Spaniard momentarily unawares, but within moments his plans unravelled as his chain slipped, leaving him fumbling to reseat it as Contador headed off up the mountain.

The 39 seconds the defending champion gained on the Luxembourg rider was enough to put him in the maillot jaune he had last worn on the Champs-Elysées podium 12 months ago.

Contador has since apologised to Schleck for riding away while he was suffering from a mechanical problem, and although debate continues to rage over whether or not the Astana rider should have stopped, the Team Saxo Bank rider says it is time to draw a line under the incident.

According to the Daily Telegraph, Schleck and Contador, whose rivalry is currently the subject of a tongue-in-cheek TV ad for bike brand Specialized, are coincidentally staying in the same hotel in Pau, and the pair are said to have been on friendly terms when they bumped into each other ahead of going out on their respective training rides this morning.

"There is only one way to win and that is to beat Alberto up the Tourmalet, there is no other plan," Schleck acknowledged. "You can perhaps put pressure on during the two early climbs but the real battle will be on the Tourmalet. It is a mountain I like, a long steep climb – 17km – with not too many sharp bends. The side we go up is a hard climb but I will enjoy that,” he continued.

The ascent proper of the Tourmalet begins at Luz-Saint-Saveur, 155.5km into tomorrow’s stage, and from there to the summit, it’s 18.6km of climbing – slightly longer than Schleck’s estimate – at an average gradient of 7.5%.

Prior to that, there are three categorised climbs that get progressively bigger and harder – the Category 4 Cote de Renoir, and the Category 1 Col de Marie-Blanque and Col du Souloir. But it’s on the Tourmalet that this year’s Tour de France may well be decided, and Schleck is confident that he can take the race to Contador, despite the prospect of poor weather.

"Rain is forecast but I don't think it will influence matters, unless there's some crashes on the downhill before then,” he explained. “Wind, rain or shine, the Tourmalet is still the Tourmalet. I am ready, I am in the shape of my life. I have improved my climbing. I don't think Alberto is going any slower than last year but I think I am going faster,” Schleck claimed, insisiting, “I don't believe I will be beaten on the Tourmalet.”

Schleck claims he has put Monday’s incident behind him, saying of the Astana rider: "He has apologised. He said he did wrong and made the wrong decision. I am not angry any more, just motivated. The case is closed and it should be closed for the fans out there as well. I didn't like to hear the crowd whistling at somebody who is a big champion. End of story."

Although Schleck has made public his intention to attack – in truth, if he’s to improve on last year’s second place in the general classification, he has no other choice but to go on the offensive tomorrow – he hasn’t said how he intends to put himself into a position to do so.

Ahead of his sudden acceleration – and gradual slow to a halt – on Monday, his Saxo Bank colleagues had forced the pace at the front of the bunch containing the big names in the overall standings, and although they were closely shadowed by Contador’s Astana team, the intention was clearly to wear down the Kazakh outfit’s riders, and the defending champion himself, ahead of Schleck’s move.

We’ll never know how close they came to achieving their aim, but Saxo Bank apparently believe that after getting back on his bike and getting up to speed, Schleck was 35 seconds quicker than Contador on the final 2.8km of the climb – although one might think that that in part, that was due to his adrenaline pumping as never before in the wake of his problems.

Schleck, however, maintains that the stage is set for him to put in the ride of his life.
"I just feel I haven't given it everything," he said. "Of course I've been racing hard, but my whole season has been designed on me reaching my peak form for these next few days."

By this time tomorrow, we’ll know whether that form is enough for him to have a realistic chance to ride into Paris on Sunday in the yellow jersey, instead of the white young riders jersey that the 25-year-old is almost certain to win for a record-equalling third and final time.

One jersey whose destination will be decided tomorrow, which sees the final categorised climbs of this year’s race, is the polka dot number for the mountains classification, with Christophe Moreau of Caisse d’Epargne and Anthony Charteau of Bbox Bouygues Telecom vying to become the first Frenchman to win the mountains classification since Richard Virenque did so for a record seventh time in 2004.

Following the first two climbs of Tuesday’s stage where he extended his lead over Quick Step’s Jerome Pineau, then lying second, to 51 points, Charteau seemed to have built an unassailable lead in the competition.

But the experienced Moreau, riding his final Tour de France at the age of 39, slipped into the break launched by Lance Armstrong at the foot of the Tourmalet and picked up maximum points over that climb and the Port du Balès to come within 15 points of Charteau.

Tomorrow promises to be an epic battle, and there are plenty of points on offer, although not on the first categorised ascent of the day, the Category 4 Cote de Renoir, where the first rider over receives three points, the second two, and the third just one.

On the following two climbs, the Marie-Blanque and the Souloir, the leading rider will receive 15 points, with 13,11, 9, 8, 7, 6 and 5 points awarded to the second to eight placed riders, respectively.

If Moreau is still in the hunt come the Tourmalet, and no doubt he will be able to count upon the assistance tomorrow of his Caisse d’Epargne team-mates to try and get him there, the double points on what is an Hors Categorie summit finish may be enough to swing the advantage his way.

On Tuesday, he took the maximum points possible – 40 – on the day’s last climb, the Aubisque, where points were similarly doubled as the last climb of the day. The first man up the Tourmalet tomorrow will also get 40 points, the second 36, and the points decline in intervals of four until the seventh rider, who gets 16. After that, it’s 14, 12 and 10 points, respectively, for the riders placing eighth to tenth.

In the event that Charteau does not score points tomorrow and Moreau does not get enough to overhaul him, eight other riders could potentially still win the mountains classification.

Two of those are team mates of Charteau, Pierrick Fedrigo and Thomas Voeckler, and besides the fact they lie too far back to stand anything but the smallest of mathematical chances to win the jersey themselves, their role tomorrow is likely to involve supporting their colleague and in particular trying to limit the damage of any moves from Moreau by seeking to deny him points.

Another three riders could technically win the mountains competition but have a far bigger prize on their minds tomorrow –overall contenders Schleck, Contador and Samuel Sanchez of Euskaltel-Euskadi. That leaves three riders who, if they got into a break early on and managed to hang on for a top ten placing on the Tourmalet, could yet end the Tour in the polkadot jersey.

That trio comprises Damiano Cunego of Lampre-Farnese Vini, 44 points behind Charteau on 99 points, Sandy Casar of Francaise des Jeux who is six points further back, and a point behind him, the previous holder of the jersey, Pineau. In this strangest of Tours for many a year, none of them can be written off just yet.