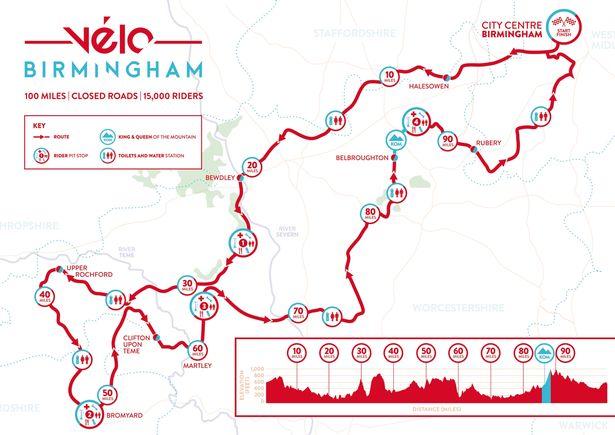 15,000 places available on closed road event which will go through Worcestershire, Herefordshire and Staffordshire
by Simon_MacMichael

Launched today at the Cycle Show at the NEC and jointly organised by CSM Active and Birmingham City Council, the event on 24 eptember 2017 will coincide with the return of the HSBC UK BikeFest, which the city hosted last weekend.

The route will start and finish in Birmingham city centre and visits Worcestershire, Herefordshire and Staffordshire.

With 30,000 people already pre-registered on the event website to discover more about it, it’s likely there will be strong demand for the 15,000 places available.

Entries open at 8am on Thursday, 29 September and priority will be given to people who have registered on the website by 5pm the previous evening. Entry can also be done via one of the events lead charity partners, which are the Alzheimer’s Society, Cure Leukaemia, NSPCC and Queen Elizabeth Hospital.

Corporate teams can enter the Birmingham Business 100, with organisers hoping that 100 of them will compete with the aim of raising £100,000 for charity – and one will have the chance of Rugby World Cup winner Johnson, who was born in Solihull, joining them.

He said: “As a cycling fanatic, it’s hugely exciting to see an event of this scale coming to my home town.

“Cycling on closed roads is absolutely exhilarating and I can’t wait to be one of 15,000 riders on the start line next September 24.

“My advice to anyone who is tempted to enter but is doubting their ability to complete 100 miles would be to just take the plunge and go for it!

“I speak from experience when I say that with the right training it’s an extremely achievable goal.

“Completing a century ride is a huge accomplishment and the feeling when you cross the finish line will be worth all the hard work.”

Coe, who is executive chairman of Chime Sports Management, the parent company of CSM Active, said: “The launch of Vélo Birmingham is a hugely significant milestone for CSM and it is extremely encouraging to see how well the event has been received.

“Vélo Birmingham is the first event in what is going to be an extremely diverse portfolio of large scale mass participation events owned and organised by CSM Active.

“Cycling is very much part of CSM Active’s core strategy and we look forward to developing our footprint in the sport in years to come,” he added.

Birmingham City Council is aiming for 10 per cent of trips in the city to be made by bicycle by 2033 and its deputy leader, Ian Ward, said Vélo Birmingham would form part of its push to raise the profile of cycling and get more people in the saddle.

“Vélo Birmingham is a huge event for Birmingham and we are extremely excited to welcome 15,000 cyclists from all over the UK to our magnificent city next September,” he said.

“The event will further strengthen Birmingham’s credentials as a modern and dynamic city capable of hosting large scale sporting events and will also serve as a powerful awareness platform for the Birmingham Cycle Revolution.

“The benefits of hosting an event such as Vélo Birmingham are plentiful, not least in terms of economic impact, charity fundraising and how it will inspire Birmingham residents to take up the sport of cycling and complete a challenge of a lifetime,” he added.