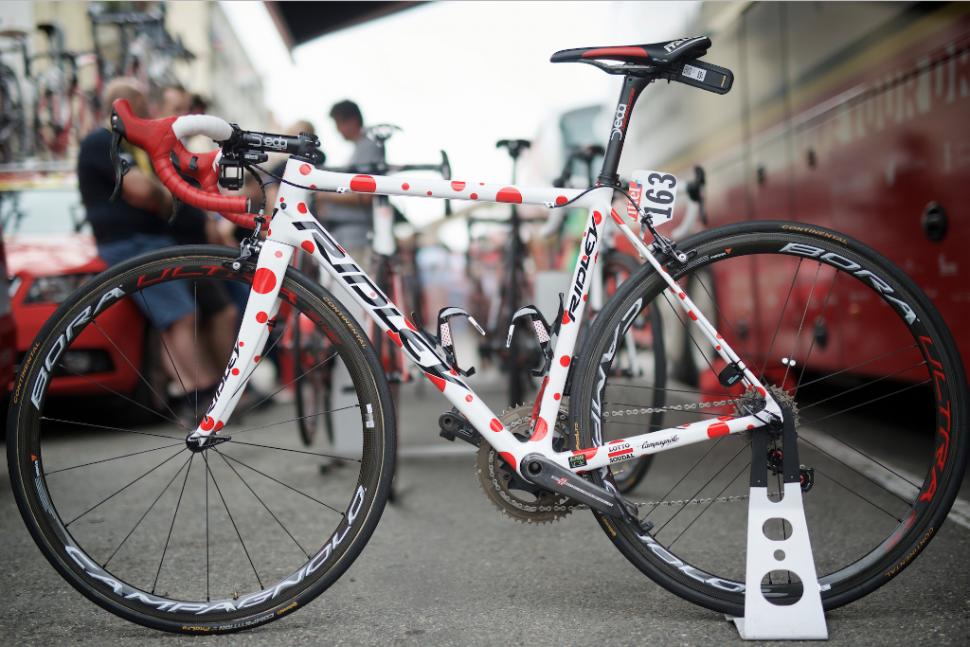 A custom Ridley Helium SL bike with a polka dot paintjob that was ridden by Lotto-Soudal’s Thomas De Gendt when he led the mountains classification at the Tour de France last month has been stolen from the bike manufacturer’s stand at the Eurobike trade show in Friedrichshafen, Germany.

The theft took place yesterday, with Ridley founder and CEO Jochim Aerts, quoted on Cycling.be, saying: “We were so proud we could show Thomas’s bike on our stand, then this happened.”

De Gendt, in Spain riding the Vuelta, said: "It's really unfortunate that this has happened. The bike means a lot to me, it was a kind of symbol of my outstanding Tour de France. I really hope it shows up.”

Ridley tweeted a picture of the bike as it was on the stand prior to the theft, with the thieves breaking the lock to make off with it.

Yesterday horror has struck our booth! @DeGendtThomas his @LeTour bike was stolen... pic.twitter.com/EpRKUmbfVf

The rider himself retweeted Ridley’s picture asking for information and pointing out that the bike is “easy to spot.” Well, quite.

De Gendt had two stints in the polka dot jersey at the Tour de France - from Stages 5 to 7, then for a further three days after winning the shortened Stage 12 on Mont Ventoux on Bastille Day.

That stage is best remembered for Chris Froome’s jog up the mountain after his bike was broken in a crash when motorbikes ahead of the group he was in were unable to get through the crush of spectators.

Thefts of bikes do unfortunately happen at trade shows from time to time, including Eurobike – in 2009, we reported how a €10,000 Van Nicholas Astraeus had been stolen before the doors had even opened to the event.

1
How much distance should you leave to the cyclist ahead in a time of pandemic?
2
Full Kit Ranker round 1: Your chance to vote for the greatest cycling jersey of all time
3
How to cycle responsibly in a time of pandemic – all you currently need to know
4
Winner announced for Shimano cycling kit competition!
5
“This does not constitute your daily exercise,” police tell cyclist stopped on M60
6
Factor updates O2 road bike
7
New Wattbike Icon indoor training bike available at discount
8
“Peloton stud” Rory McIlroy invites golf rivals to static cycling challenge