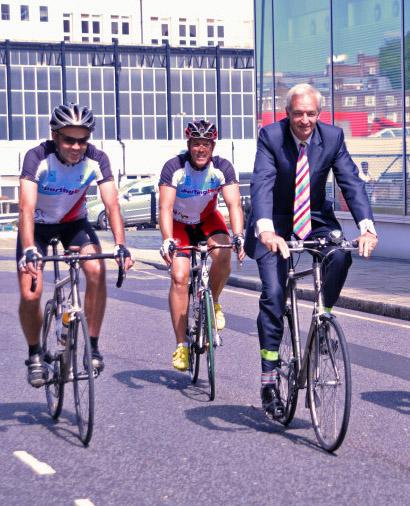 CTC president and Channel 4 News presenter Jon Snow’s bespoke titanium Condor has been stolen from outside the Channel 4 newsroom in central London.

It’s the second time in a year that Jon’s had a Condor Gran Fondo stolen.

Jon, pictured on his bike with riders from this year's The Race Against Time LEJOG ride, of which he is patron, wrote on the Channel 4 News website: "I unclip my microphone, take out my earpiece, listen to a quick debrief at the end of Channel 4 News, put on my cycle clips, wander out to the street to straddle my trusty steed – and it is gone.

“I walk twice round the building looking for broken locks or the bike itself. Then I wonder whether I parked it somewhere else – and I know I didn't. It was on the last hoop, right under the CCTV camera.

“Yes, it's gone. And it's another stake through my heart. The sudden loss of independence, mobililty, and that old friend.

“And if you think you've read all this before, you have. It happened at the end of last year, but then it was from my block of flats.

“It was a beauty - a hand-built, titanium-framed Condor, a too-good-to-hurry-mint bike.

“So I've tweeted an offer of £1,000 to get it back. In fact, whoever finds it can have anything they want! (Well, except the bike itself).

“Sure, it's insured. But I daren't even begin to tell the people whose craft made it.”