Tour tech 2010: Take a peek at the AG2R and RadioShack bikes

Team AG2R La Mondiale have yet to make a major impact on the 2010 Tour de France although it's not all bad news for the French outfit – they've got some of the best bikes in the race in the shape of their Kuota KOMs fitted out with SRAM Red components and Reynolds wheels. After stage nine, AG2R's highest placed rider was Irish/Frenchman Nicolas Roche in 17th position overall, just behind Bradley Wiggins. 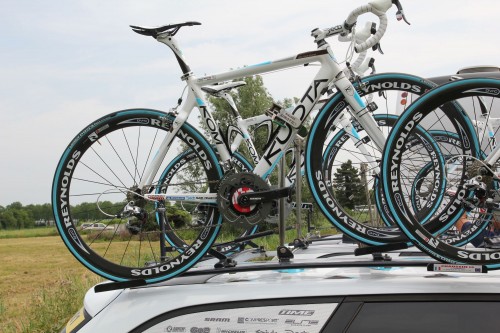 The carbon frame is the lightest the Italian brand has ever produced – 900g in the XS frame size, and still under 1kg in the XL (58cm) model. It comes with a monocoque front triangle made from ultra high modulus carbon fibre, an asymmetric back end that puts extra material on the driveside where it’s most needed, and an oversized BB30 bottom bracket to bump up the rigidity there. Like many other performance-orientated bikes, the KOM has a head tube that houses a 1 1/4in lower headset bearing for additional stiffness up front. 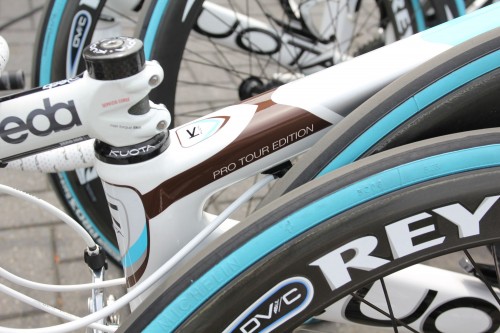 The wheels are Reynolds’ DV46 C ULs for clincher tyres rather than tubulars, with the team running Michelin Pro 3 Races. Most AG2R riders are going with a standard 53/39T crankset for the road stages, although Italian rider Rinaldo Nocentini, who wore the yellow jersey for eight days in 2009, is using an S975 SRM Power Meter option to keep an eye on his wattage. 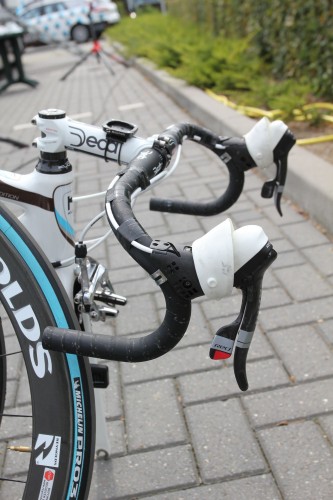 Team RadioShack are riding the road stages on Trek’s new Madone 6 Series SSLs which we talked about last week, but here's a bit more detail. This is the last chance to see Lance ride one of his special edition bikes in the Tour, the seven-time winner having announced that this edition will be his last.

The Madone SSLs shed 100g over last year’s models largely through the use of a carbon upgrade and less paint, will be available to the public for product year 2011 from this autumn. 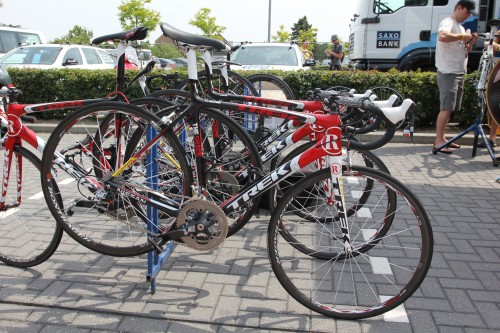 RadioShack's groupset components are all from SRAM’s top-level Red range, the only difference being that Armstrong’s main bike is decked out with a black and yellow version – as are the bikes of the other SRAM-sponsored former Tour winners Carlos Sastre and Alberto Contador. Team Saxo Bank’s Fabian Cancellara has a set too, courtesy of his prologue victory, and any other SRAM-sponsored rider who wears yellow this year will get the same. Even Lance is only allowed one set of this kit, though; his back up bike doesn’t have it. SRAM Red will be available to buy in this limited edition finish for several months starting in the autumn. 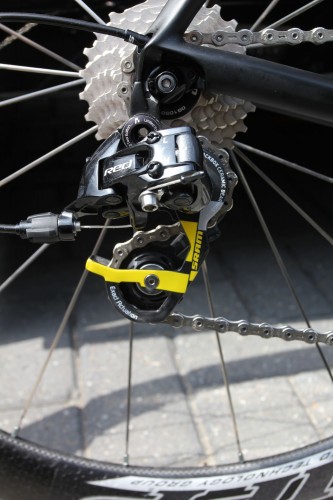 Armstrong’s main bike also comes in a different colour-scheme to that of the other members of the team. It’s a Livestrong (Lance’s foundation to fight cancer) design with yellow bands, the word ‘unity’ on the seat tube, and two hands clasped together at the head tube. We’re pretty certain that a Madone in this finish will be available to buy later in the year. 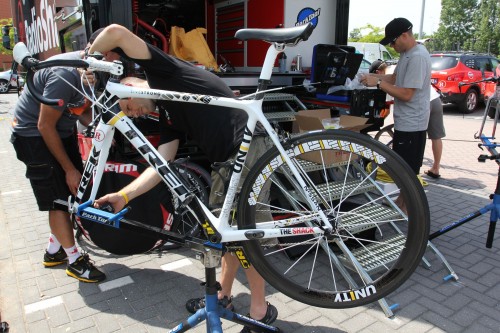 The Bontrager wheels get a similar treatment and there’s even another ‘unity’ written up the back of the Bonty seat post. Armstrong’s saddle, by the way, is a San Marco Condor – not as light as some, but when you’ve got three weeks of hard riding, a bit more cushioning makes a lot of sense. 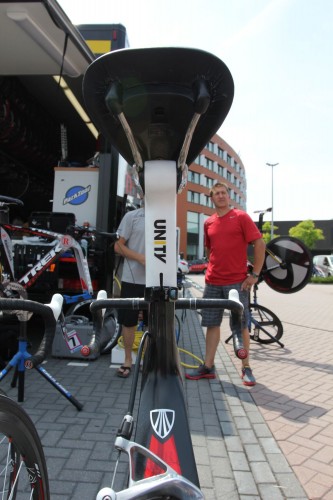 Team RadioShack are running Look pedals. Most of them are on Kéo Blade Carbon TIs (£249.99), the model that was released at the end of last year using a carbon strip blade rather than the usual coli-spring to provide the cleat retention pressure. The blade comes in two different types to provide different levels of tension. Not surprisingly, all the bikes we saw had the 16 (red) strip as opposed to the 12 (yellow) strip – the one that offers the most security. Interestingly, Kéo 2 Max Carbon pedals (£137.99) were being used too.

One feature of the RadioShack bikes that you’re unlikely to want to incorporate yourself is the weight used to bring them up to the UCI’s minimum limit of 6.8kg (14.96lb). The mechanics sling the extra ballast in at the bottom bracket. 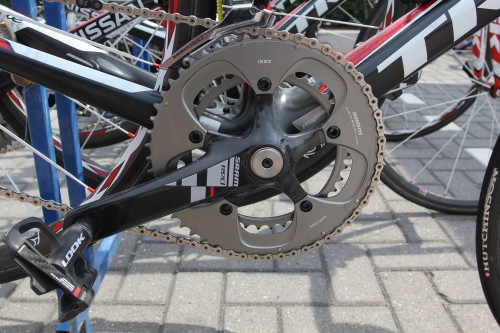 Team Katusha, the Russian squad that’s home to Vladimir Karpets and Robbie McEwen, are on Ridley Heliums. The high modulus carbon fibre frame comes with an extended seat tube that gets chopped to the right length and the riders get Ridley’s full-carbon monocoque fork up front. Katusha use Campagnolo’s 11-speed groupset components and Campag wheels too. 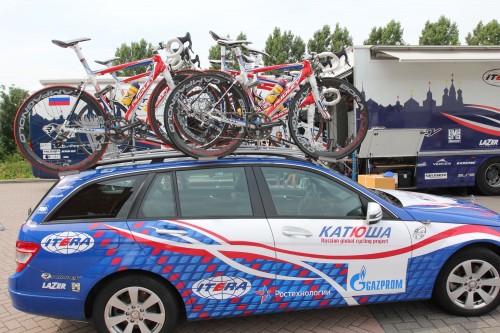 Wandering around and chatting to the various team mechanics and tech bods before the start of the Tour in Rotterdam, it was interesting to find out about various stresses and strains that the pros’ bikes have to put up with.

Obviously, their bikes get ridden hard and lots in all kinds of conditions, and there’s always the good chance of a major stack, so any deficiency in strength or durability will soon become a real issue. But SRAM, for example, were getting a lot of problems with their shifters and initially didn’t know why. They soon realized that it was the back-up bikes that were suffering rather than the bikes that we’re being ridden day in, day out, which didn’t make much sense.

It turns out that water was getting into the shifters when the bikes were being driven around on the top of the support vehicles, and the speed the cars were going at times was forcing it further in. Plus, the levers weren’t getting used or serviced every day so the water was staying in there. Hence, SRAM have been seeking out lubes that can cope with the everyday rigours of pro racing.

Another issue that the pros’ bikes have to put up with is being taken apart, cleaned, serviced, and then rebuilt all the time. The teams can’t take chances with equipment failure so the bikes get a complete going over every night during a race like the Tour de France… And we’re not just talking about a bit of extra lube on the chain – it’s a full-on overhaul. This puts a big demand on the components that gets fed back to the manufacturers and eventually influences the design of the products the rest of us use.

Finally: bar taping. This is how you do it, right? You start off by wrapping the tape anticlockwise around the bars on the non-driveside of the bike – from the inside to the outside over the top of the bar. You do the opposite on the driveside – clockwise. Then, when you get to the levers, you do a figure of eight around them before carrying on towards the stem.

The idea is that the pressure from your hands tends to tighten the tape rather than loosen it. But some of the pro mechanics do it the opposite way. What would they want to do that for? Admittedly, they do the whole lot in about 10 seconds flat. And also admittedly, bar tape never shifts whichever way you do it as long as you’ve done a good job. But we just thought there was a right way and a wrong way to tape your bars. Apparently, we were wrong.