Wandering around backstage as it were at the Tour de France you get to see all sorts of technical exotica big jockey wheels, and  a whole lot of Zipp wheels, including these beauties the new Zipp 404 Carbon Clincher launched a few weeks back with much media hoo hah. What's so special about them? Well watch our video to find out…

Andy Paskin was Zipp's man on the ground in the lead up to the Tour's Grand Depart in Rotterdam and he took time out from liaising with all the teams running Zipp wheels and equipment (and that's a lot of teams with a lot of wheels, just take a gander at Saxo Bank's Zipp wheel mountain) to show us the new 404s and the new aluminium  Zipp 101 clinchers … but  more on them later.

Zipp are targeting enthusiast roadies and racers with the new wheel: "There are a lot of riders that don’t want to or are tired of gluing tubulars but still want the aero performance of a tubular and a cool looking wheel." The other big group Zipp think will be interested are triathletes who again want the benefits of a high performance aero wheel, but are apprehensive about using tubulars and one reason for that, particularly in the US where event entry fees are high, "most [triathletes] want the highest performing, most aerodynamic product but some are apprehensive to go tubular. The main reason being that they paid $600 to race and are concerned that their training and entry fee may be lost on peeling a tubular off on the side of the road," Andy explained.

There's been a clincher version of the 404 for a while now but one with an aluminium braking track so it doesn't have the weight advantage of being a full carbon rim. This new wheel incorporates Zipp's Fire Crest rim shape which Andy explains in full in the video but is essentially Zipp's way of combining the demands a clincher tyre puts on a rim with the benefits of using carbon along with the most aerodynamic rim profile possible.

One of the ways the new 404 uses to meet the demands of a clincher is by incorporating an exclusive to Zipp carbon compound for the braking surface. This braking surface compound includes a heat resisting resin which, says Zipp, helps stop the spikes in temperature that heavy continuous braking can cause in conventional carbon rims and which can be so detrimental to the performance of clincher tyres… not something you want on a long 30mph alpine descent.

To get the full low down on the new carbon clincher 404s watch video where Andy gives us chapter and verse on all the technical aspects of the wheelset seeminly without pausing for breath which is quite a feat in its own right.

All the technical aspects of the wheel are covered in the video, Zipp spent two years prototyping them so that you can have a lightweight carbon rimmed wheel with the convenience of not having to glue your tyres to it, claimed weight for the complete wheelset is 1557g, and the price… not cheap, we'll update this as soon as we get any information. 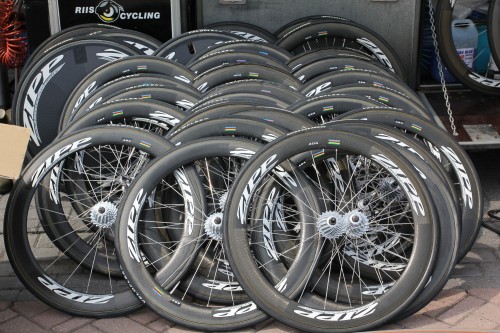 Of course, when you meet the man from Zipp amid a sea of speed weaponry at the Tour de France and he shows you his new carbon clincher wheel the question you should ask him is: are any of the pros riding them…? And the answer is? We're emailing him right now okay, it was very hot, and I hadn't had cake for hours… my blood sugar was all over the place, be interesting to know though, most pros are pretty wedded to their tubs but not necessarily all of them. And the answer is:

"Nicki Sorenson and Baden Cooke have been training on them for a few months….Racing on them is not out of the question, as these guys simply want the highest performing, best feeling product!" says Andy.

As to availability? They're shipping now in the US and we'd expect to see them over here some time in the autumn, but we'll keep you posted on that too. The cost is £2,300 the pair.