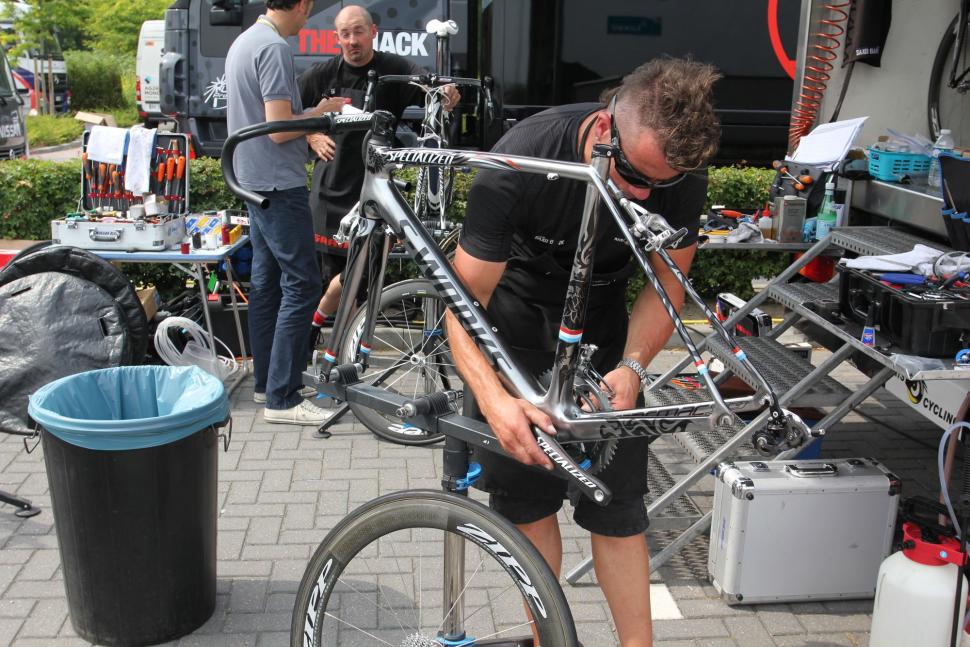 It wasn't a good day at the Tour for Saxo Bank's Andy Schleck. As if a crash strewn stage wasn't enough to contend with, then in all the confusion from the chute he lost his bike.

Whether it was stolen at this stage we don't know, but we all know how quickly a bike thief can make away with your pride and joy. Bike thieves are opportunists and leave your bike unattended for even a moment, and the tea leaf will be on it and off. It’s happened to us. Imagine how quick a getaway you can make on a tricked out Specialized Tarmac SL3.

And tricked out it is too, we took some pictures of Andy’s bike the other day in Rotterdam. And the first thing'll you'll notice is the distinctive silver with black graphics paint job… that's the lion of Luxembourg we're supposing rather than the Flandrian variety. Andy's bike doesn't have the National Champion road stripes on it - that's brother Frank's bike in the main picture with which it shares the same paint job. 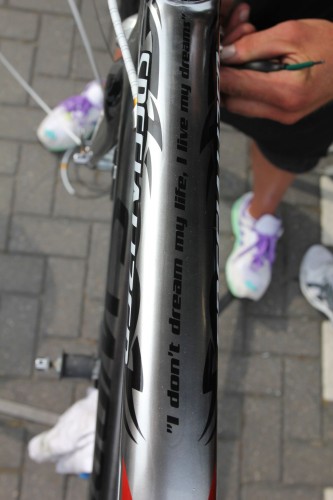 Andy's bike also has some other unique touches all of its own though. First up is the motto on the top tube. Brother Frank has one too, but not the same one. In Andy's case it says: 'I don't dream my life I live my dreams". And no, Frank's is not "Yeah, what he said", it's "Live to ride, ride to live".

As you'd expect, it's got the full Zipp wheel/SRAM Red treatment and is a properly fancy piece of kit. It also has one other distinctive feature – a rear mech with some enormous red jockey wheels on a carbon fibre arm. They come from Berner bikes and have two large ball bearings that, the manufacturer claims, offer a performance gain of 5.85 watts despite a small weight penalty – we're talking about a few grams. So, you go faster for the same amount of power you put out. 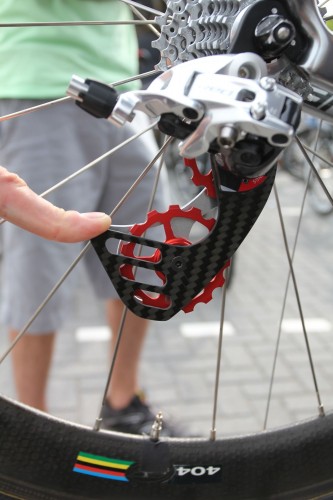 If you see someone with a bike looking like this – they may also be wearing a red and white polka dot hat and carrying a large green cardboard hand with the letters PMU on it – please let us, Team Saxo Bank, or possibly better still the Belgian or French police know as soon as possible. Far-fetched as it sound, this could even have been a planned heist. Andy Schleck mentioned that there was something like oil on the road which caused the riders to crash more then once in a very short distance. We've not heard of this ever happening at a race like the Tour de France, but we have heard of thieves targeting races before.

In this case it's more likely that Schleck's bike made it's way back on to a passing team car and Andy will be re-united with it in time for Stage 4*, but just in case you know what to look out for… keep 'em peeled!

* It's the Roubaix SL3 for tomorrow, and more on that here.

1
Don’t hang around if you want a Gore-Tex Shakedry jacket – the fabric is being retired. Plus tech news from Campagnolo, MET, Kask + more
2
Drink driver who ploughed into cyclist with friend riding on bonnet jailed for 14 months
3
Near Miss of the Day 837: Mercedes driver close passes cyclist carrying four-year-old son in child seat
4
Hit-and-run driver chased cyclist on pavement and knocked him off bike in shocking road rage incident
5
“I don’t want to see someone die on my doorstep”: Council urged to sort out notorious zebra crossing where near misses “happen every day”
6
Cyclist found guilty of riding carelessly in crash which killed motorcyclist
7
Active travel campaigners release footage of anti-LTN vandals setting bollards alight
8
How much?! It's now revealed council spent £10,000 on "embarrassing" obstacle-packed cycle lane