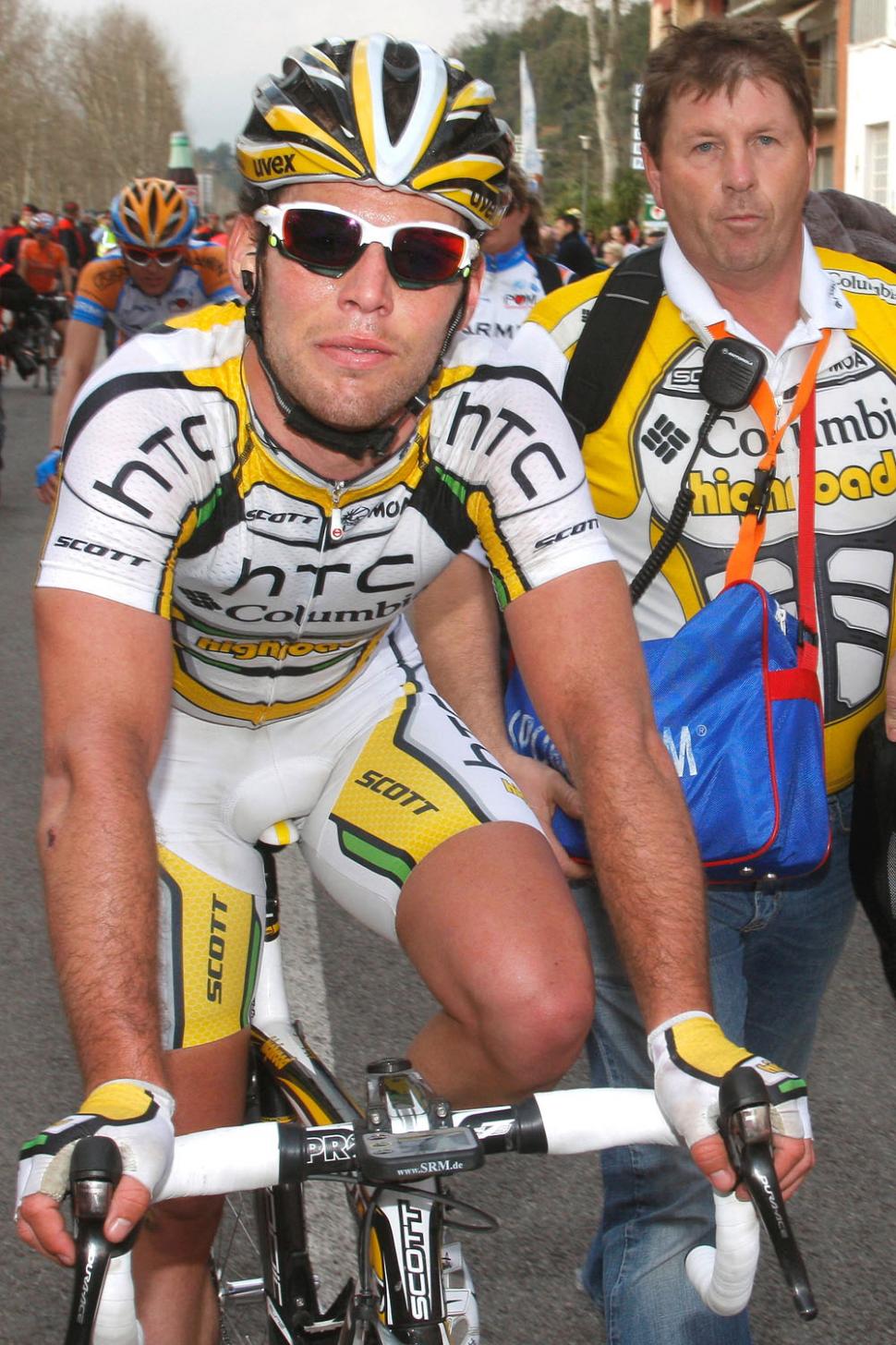 Who is last rider to finish top two in consecutive TDF sprint stages? Read on for answer!
by Simon_MacMichael

As Mark Cavendish crossed the line in Brussels yesterday at the end of Stage 1 of the Tour de France in an uncharacteristic 178th place, his mood will hardly have been helped by the jeers he received from what appeared to be a group of Team Sky “fans,” dressed in replica kit, who had perhaps spent a bit too long in the sunshine sampling some of Belgium’s more potent brews.

The Manxman crashed as he fought to control his bike on the final corner, on a day when his hopes of clinching the green jersey in Paris in three weeks time suffered a blow as Alessandro Petacchi of Lampre-Farnese Vini won the stage, with Thor Hushovd of Cervelo test team, last year’s winner of the points classification, coming in third.

HTC-Columbia sprint coach Erik Zabel, himself a six-times winner of the maillot vert, conceded afterwards that the team faced a difficult task in getting Cavendish’s campaign back on track, saying “now we're one stage behind – the difficult work starts now.”

The former Telekom and Milram rider added “maybe we have to fight back in Arenberg on the cobblestones stage,” which takes place tomorrow and includes sections of the Paris-Roubaix route.

He acknowledged, however, that “first of all it's important to keep the motivation high,” although he claimed that Cavendish “was good in the bus” afterwards.

Petacchi, returning to the race after a five-year absence, was evidently delighted to have picked up the fifth stage win of his career, having one four in 2003 when he was racing with Fassa Bortolo.

The 36-year-old told Italian sports daily La Gazzetta dello Sport that he had started the morning worried about not being able to remember how to ride a Tour stage any more, but his confidence had grown as the day went on.

But he added that it was “a nervous race, almost a Classic,” and the Italian, who will start today in the green jersey, added that while he’d been aware of the crash involving Cavendish and Rabobank’s Oscar Freire, “I was in front.”

With Cavendish down, it fell to his lead-out man Mark Renshaw to try and salvage something for HTC-Columbia, but the Australian rider couldn’t quite beat the Italian to the line.

“Once I heard the crash we had to totally rearrange," he explained to AFP. "I moved into the sprinter role and at that stage usually I'm used to going with 500 metres to go and I had to wait.

"Unfortunately the training I've done isn't going to let me get over Petacchi," he added.

Perhaps not, but it does mean that Renshaw is perhaps surprisingly the last man to have finished in the top two in consecutive sprint stages of the Tour de France – the last time being in rather different circumstances when he helped Cavendish seal an emphatic win on the Champs-Elysees 12 months ago.

Another of the riders Petacchi outsprinted for the line was Hushovd, who said afterwards: “Everyone wants to stay at the front, whether or not you’re a sprinter. The roads were very narrow, that’s why there were a lot of crashes, but I was able to avoid them and I was still third, so it was OK. It was hard, really hard. I am up there for the green jersey, so I am happy.”

Cavendish wasn’t the only top sprinter who failed to pick up points yesterday, with Tyler Farrar of Garmin-Transitions frustrated with the line almost within touching distance.

“Everything was going great, I felt good and the team was riding perfectly. Then, in the last 200 meters an AG2R rider hit my rear wheel and snapped my derailleur,” explained the American.

“I literally couldn't ride after that and had to walk through the finish and to the bus. Its a shame because everything had gone so well and the team worked so hard for me. I'm glad that we're all ok and I'm lucky that I didn't go down. Tomorrow's a new day and I think its safe to say we're even more motivated now.”

Understandably, much of the reaction following the stage focused on a series of crashes, and while those inside the closing kilometres took place inside the barriers, huge crowds lining the roads were blamed for some of the earlier chutes.

Garmin-Transitions rider David Millar, who had started the day in green following his third place in Saturday’s Prologue in Rotterdam, was one of the riders, along with Giro d’Italia winner Ivan Basso, caught up in an early incident when a dog ran into the path of the peloton, and said that fans eager to get a glimpse of the action had caused problems.

"That was the scariest thing today, not the winds," said the British rider. "There was so many hundreds of thousands of people, coming out on to the road and causing the riders to clip them."

Renshaw, too, highlighted the dangers the crowds posed, telling AFP: “Generally the day was hectic. I haven't ridden a race like that. It was crazy, at points it was beyond dangerous. We were trying to race through those roads at three abreast, and we couldn't do that.”

"(The crowds were) unbelievable for the Tour, but absolutely too dangerous,” he continued. "There were guys going down every five minutes. There were points where we were riding 10/15 kilometres an hour, and they were still crashing."

One of the victims of those crashes was Renshaw’s team-mate Adam Hansen, who finished the stage despite suffering a broken shoulder early on and has now retired from the race, which weakens the HTC-Columbia train for the rest of the race.
"I'm extremely disappointed," Hansen said. "I was really looking forward to this Tour and I'm upset now that they have to continue with only eight riders."

British rider David Millar was among four or five riders who came crashing down when a dog ran out on to the road but he admitted he had already fallen earlier because some members of the public got too close.

"I'm extremely disappointed," Hansen said. "I was really looking forward to this Tour and I'm upset now that they have to continue with only eight riders."

Team Sky managed to steer clear of the crashes inside the closing kilometres, placing three riders - Geraint Thomas, Edvald Boasson Hagen and Michael Barry - in the top 20, with team principal Dave Brailsford saying: "The riders have come out of today absolutely fine, there are no problems whatsoever.

"To avoid all that late drama and come out unscathed was great. The whole goal of the day was to lose no time on GC and have no problems and that's what happened so we're really happy given how sketchy it got at the end."

Today’s 201km Stage 2 takes the riders from Brussels to Spa and includes sections of the Liège-Bastogne- Liège route. Heading into the Ardennes, the stage includes the first King of The Mountain points of this year’s Tour, with three Category 4 and followed by three Catgerory 3 climbs meaning that the racing is likely to be more reminiscent of a Spring Classic than an opening week stage of the Tour de France.