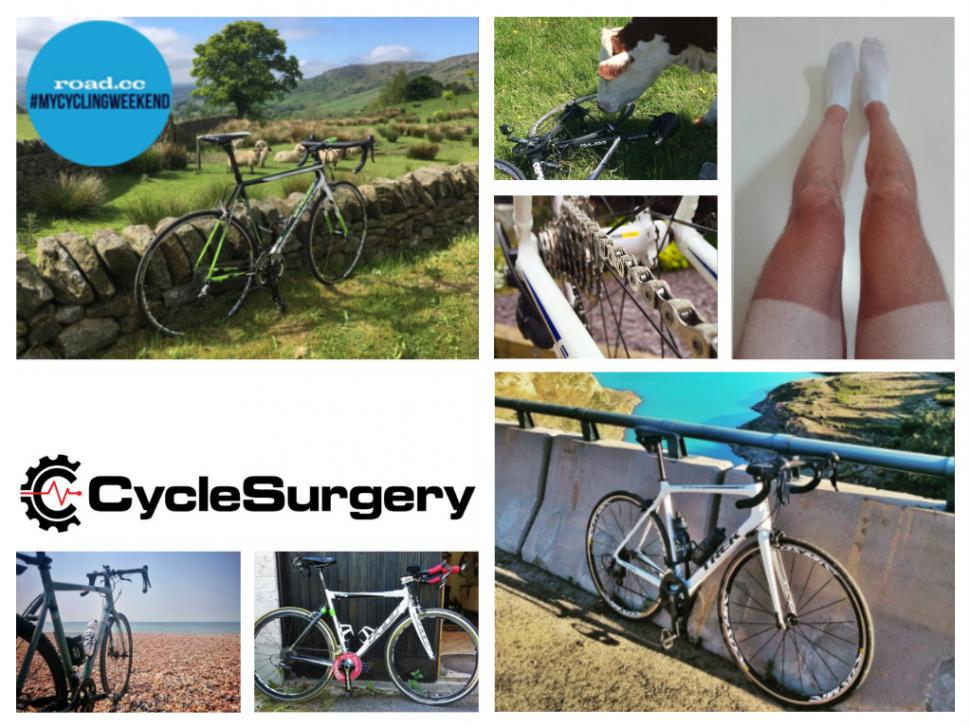 We asked for the freshest photos of your bikes this #mycyclingweekend - you blew our socks off! You've got some hot rides!...
by Elliot Johnston

The summer sunshine certainly helped put a sexy sheen on things, but... hamana, hamana, hamana... your bikes were looking B-E-A-UTIFUL this #mycyclingweekend. It's not just us here at road.cc saying that either: the folks at Cycle Surgery agree, and they've got a prize to give away!

The prize was due to go to the freshest set of wheels we saw this #mycyclingweekend, and that's where it's going.

Except our collective minds went wandering to a fantasy land while we were scrolling through your photos. We spent our morning sat in the office daydreaming over summer alpine climbs on the superbikes of our dreams, all thanks to your stunning photography on a simply beautfiul #mycyclingweekend.

Fresh no longer felt like an adequate adjective for what we were seeing.

So, now that we've come crashing out of our French mountain fantasy, it's time to announce the winner of this week's sexy bike competition.

When it came down to it, there was only one clear winner. One man who managed to nail all of the prerequisites on the fresh photoshoot front.

Not satisfied with grabbing a quick and dirty shot of his lovely Cannondale Supersix Evo, our winner Jonathan Reeves found himself a herd of jealous/pervy onlookers - depending on how child-friendly you judge this outrageously sexy photo to be - a view to die for, and a bout of beautiful weather.

Congratulations Jonathan, keep your eyes peeled for a direct message to your Twitter account with details on how to claim your prize!

Jonathan wasn't the only one who sent us some outrageously sexy bike photos this #mycyclingweekend. Check out our runner up photos: Justin Wanstall's shot over Lake Vinuela in Malaga, Spain, Instagram user daveb85's photo of the view from Pendle HIll near Burnley, and edvardasm's sexy Brighton Beach photo shoot featuring his Felt.

Ready for a dip! After making my way through the hilly parts of Sussex, I have finally reached Brighton. Roundtrip is definitely on the agenda #brighton #sussex #bikeride #bicycle #bike #sea #beach #longridge #felt #mycyclingweekend

Again, there were plenty more sexy bike photos sent in over the weekend, so here are a few more of our favourites. A highlight being Instagram user baybash76's bike that looked so fresh and appealing a cow tried to eat it!

Any idea what to do when a cow wants to eat your bike?!? #minchinhamptoncommon #cows #cycling #mycyclingweekend

#mycyclingweekend #wilier #campagnolo #veloforte. What a lovely day out in the sun

#mycyclingweekend #wilier #campagnolo #veloforte. What a lovely day out in the sun

As always there were a few of us here at road.cc out and about this #mycyclingweekend. Laura Laker headed out in full road.cc garb and mixed a stunning summer bike ride with a bout of tree climbing.

The sun and warmer than normal temperatues were clearly motivators for a few of you. Twitter user @zanf took this weekend as an opportunity to do a "little jaunt down to the coast and back."

That little jaunt totalled eight hours of moving time, and 202.4km covered. By the looks of it we need to redefine our sizings here at road.cc... 202km is little? Wow.

Yesterdays little jaunt down to the coast and back! #mycyclingweekend pic.twitter.com/29IIX0Iapy

@roadcc sacrifices have to be made. Skin or expensive carbon? No brainer, I saved the bike #mycyclingweekend pic.twitter.com/Dv7HlZV0vA