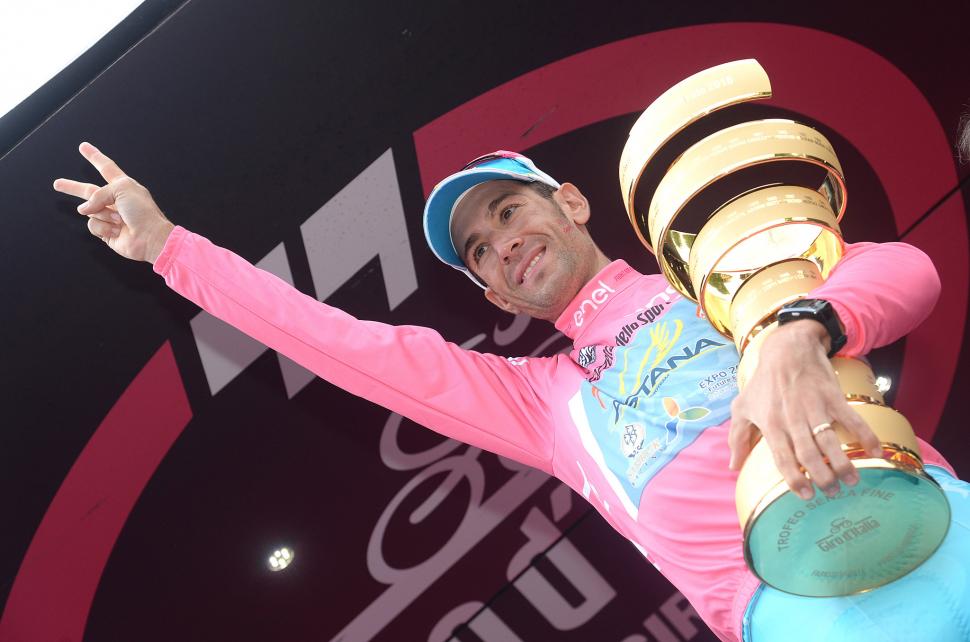 Vincenzo Nibali of Astana has won the 99th Giro d’Italia, the fourth Grand Tour victory of his career. The first rider across the line in today’s final stage from Cuneo to Turin was Giacomo Nizzolo of Trek Segafredo, ten times a second-place finisher at the Giro and this afternoon seeming to have won a stage for the first ever time. However, he was judged to have impeded Lampre-Merida's Sacha Modolo in the sprint, and the stage win instead went to runner-up Niklas Arndt of Giant-Alpecin.

The Sicilian’s second overall victory in his home race seemed highly unlikely on Thursday evening when he lay 4 minutes 40 seconds behind race leader LottoNL-Jumbo’s Steven Kruijswijk, and there was even talk of him abandoning the race due to health issues.

But after undergoing medical tests and, reportedly, acupuncture, he took a stunning stage win in Risoul on Friday, the day when Orica-GreenEdge’s Esteban Chaves took the overall lead, then moved into the maglia rosa yesterday with another dominant performance.

For most of the 163km stage which concluded with eight laps of a 7.5km circuit in Turin, two LottoNL-Jumbo riders were out in front on their own – Jos van Emden, and Martin Tjallingi, the latter riding the final Grand Tour of his career prior to retiring next month.

A specialist time triallist, van Emden was finally brought back with just under 7km remaining, Bardiani-CSF’s Sonny Cobrelli immediately launching an attack but crashing within metres when he hit a spectator who was crouching to take a photo.

A scrappy finale saw a number of riders attack inside the final kilometre, but Nizzolo timed his charge for the line perfectly to appear to have finally broken his duck in his home Grand Tour, but as the top three overall finishers took to the podium, it was confirmed that he had been declassified for irregular sprinting.

Earlier, with 30 kilometres remaining, another big crash in the peloton saw riders including Chaves and Rigoberto Uran of Cannondale hit the deck.

Due to the wet roads, the race jury had decided moments before to take the final general classification time on the next passage of the finish line, meaning that there would be no changes overall as long as the riders completed the stage.

One rider who was unable to finish as a result of that crash was Movistar’s Jasha Sütterlin, taken away in an ambulance for treatment, as was Dimension Data’s Johann van Zyl.

Joining Nibali on the final podium were Chaves and Movistar’s Alejandro Valverde, second and third overall respectively, while Nizzolo took the points classification for the second year running - and once again, thanks to the reversal of today's result, without winning a stage.

After collecting his second Trofeo Senza Fine - the 'Endless Trophy,' so called because of its spiral shape - Nibali revealed that his struggles at the start of the final week were due to illness.

"I had a stomach bug during the Giro but it’s better not to tell everything sometimes," he explained.

"The last rest day allowed me to get better. I never said that I wanted to go home. I always remained in the high part of the classification.

"Steven Kruijswijk had a good advantage after the Dolomites but I knew the highest mountains were yet to come. Riding above 2000 metres isn’t easy for anyone but I found myself in good shape.

"Kruijswijk crashed but towards the summit of the Colle d’Agnello [on Friday], I noticed he was breathing heavily so I put pressure on him climbing and then descending.

"Had I not done so, probably nothing would have happened and Chaves would have had an easy ride as well. Everyone was watching me and I wasn’t used to race guys like [Tom] Dumoulin, Chaves and Kruijswijk.

"I don’t often look at my palmarès but when I do, I realise it’s rich of great successes," he added.

Nizzolo looked anything but happy as he stepped onto the podium to collect the red points jersey, and his team said he had been on the edge of tears when he was told he had been stripped of the win.

"Great job from the team, and great sprint from myself," he said. "The jury decided not to give me the victory, but I will go home tonight knowing that I was the fastest today." 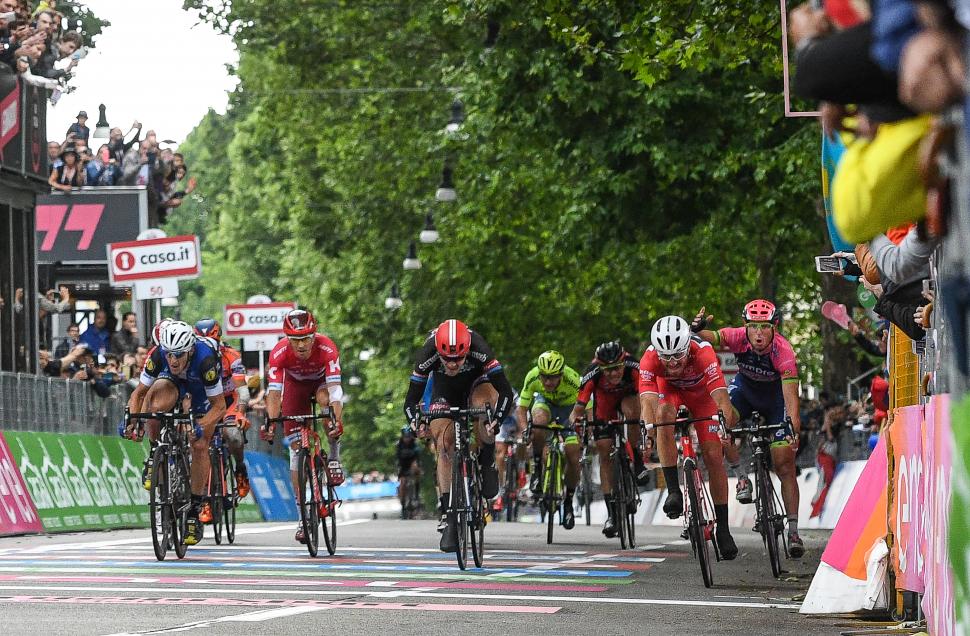 He said: "I saw the sprint from my side of the road, which was the other side from Nizzolo and Modolo. It was nervous in the last kilometre. It was hectic through the corners but I just focused on myself. I crossed the line in second position.

"Afterwards it turned out that I won the stage. It was a surprise for me. The jury took its decision, it was a difficult one to take for sure.

"This is the biggest result of my career so far. I came here to go for the sprints and to win a stage. I had two good results before today but the win was missing.

"I can imagine Nizzolo is very disappointed but I hope he can enjoy the maglia rossa. He has had a good Giro,” he added.