Subscribe
Back to news
news
Sportives and organised rides
Video 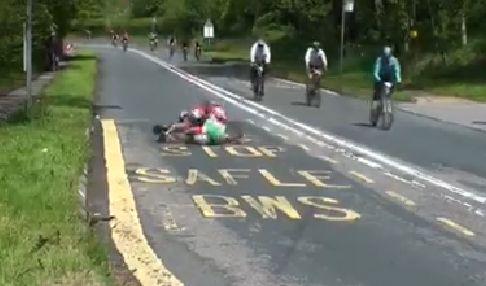 What happens when your chain comes off - extreme version, but Shane Dennis Pearson managed to complete ride despite spectacular stack
by Simon_MacMichael

A cyclist who took part in yesterday’s Velothon Wales on a fixed gear bike has posted a video to Facebook showing the moment he crashed heavily when his chain came off as he was pedalling hard to get up a climb.

Shane Dennis Pearson from Port Talbot managed to complete the 140 kilometre ride, which includes 1,826 metres of ascending, on his recently purchased bike after his crash, which happened towards the end of the event.

According to the Velothon Wales website, fixed gear bikes are banned as are singlespeed bikes  unless they have two independent brakes and a free hub.

He wrote: “Yesterday was a mix of blood sweat and gears hahaha the hills was brutal but I killed it on the straights.

“A massive thank you to Stuart and Hannah for helping get past the last 10k after the crash I truly don't think I would have been able to finish without you gets dragging me alone I'm blessed with an amazing group of people also known as cycle cafe.

“Even with the crash I don't think I would change any part of that day yesterday but I definitely learnt that a fixie is probably not the best bike for a sportive like the velothon anyone willing to lend me there bike next year I promise I won't crash haha.”

Asked by a friend on the social network whether he was okay, Mr Pearson said: “Yeah I'm good just cuts and bruises ...  my chain came off the bike as I was pushing hard up hill and I went straight down to the deck.”

Another friend commented: “Mate this is both hilarious and eye watering at the same time,” to which Mr Pearson replied: “I'm glad more and more people are finding this funny haha.”

Crashes involving one or more riders are part and parcel of a mass participation event such as Velothon Wales and most, like Mr Pearson, escape with cuts and bruises – although as we reported earlier today, there was a more serious crash at the event when two cyclists collided, with one knocked unconscious and later taken to hospital by ambulance.