Alexander Foliforov of Gazprom-Rusvelo is the surprise winner of the Stage 15 mountain time trial in the 99th Giro d'Italia, but race leader Steven Kruijswijk of LottoNL-Jumbo, the last man out on the course, very nearly pipped him to the win, finishing just a fraction of a second behind the young Russian.

The rider with most to regret after the 10.6 kilometre climb from Castelrotto to Alpe di Siusi, which had a maximum gradient of 11 per cent, was pre-race favourite Vincenzo Nibali of Astana, winner of the Giro in 2013.

Inside the final couple of kilometres Nibali, lost time when his chain dropped and he had to swap bikes - tossing the one he had been riding towards a rather startled spectator. 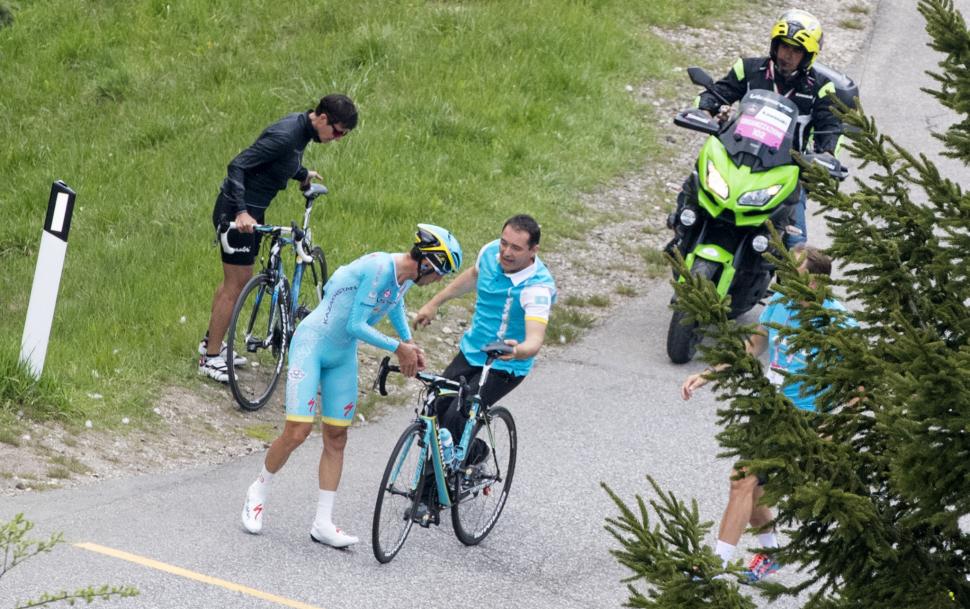 Shortly beforehand, he had almost been impeded as there was an altercation between fans - one, in cycling gear, pushing another, part of a group sporting wigs and retro football jerseys who had run alongside riders throughout the afternoon, out of Nibali's way.

The Sicilian, second overall this morning, finished the stage in 24th place, 2 minutes 10 seconds behind Foliforov.

But more concerning from his point of view, is that he was the same amount of time behind the man wearing the maglia rosa with a week's racing left.

Orica-GreenEdge's Esteban Chaves now moves into second, 2 minutes 12 seconds down on Kruijskijk, with Nibali a further 39 seconds down in third spot. “For me it’s a historic day," reflected Kruijswijk. "I lost the stage by almost nothing but I gained more time that I could have hoped for on my rivals. I never expected to be in the lead at the end of the weekend before the last week. I’m in my best shape ever.

"As it was a 30-minute  time trial, I had to start fast in order to not lose time at the beginning, then I found my rhythm, although the last two kilometres were very hard. I haven’t won the Giro yet but I hope to defend the Maglia Rosa till the end. I’ve got faith in my team, although Chaves, Nibali and Valverde are equally dangerous. I don’t know the coming mountain stages with precision but the last two will be very demanding because of the altitude."

Foliforov said: “I was very nervous during the last minute of the race as I was watching TV. I thought Kruijswijk was going to win.

I still cannot believe that I’ve won a stage of the Giro d’Italia! It’s my best distance and uphill time trials are my speciality.

I won a similar uphill time trial at the GP Sochi in Russia and I came 5th at the Giro della Valle d’Aosta. Today’s victory is very important for the team, our sponsors and me, bearing in mind that we’re a wildcard team. It shows that we can fight and win stages."

He would have finished higher and perhaps even won had he been able to find space to get around a Tinkoff team car that was following the rider in front of him - but photographers and fans inside the barriers to the left meant that was impossible.