Giulio Ciccone of Bardiani-CSF has won Stage 10 of the Giro d’Italia, with Bob Jungels taking over the race lead from Etixx-Quick Step team mate Gianluca Brambilla on a day when Team Sky’s Mikel Landa was forced to abandon through illness.

The 21-year-old neo-pro Ciccone, who takes his first professional win, had been in the day’s break on the 209km stage from Campi Bisenzio to Sestolo. 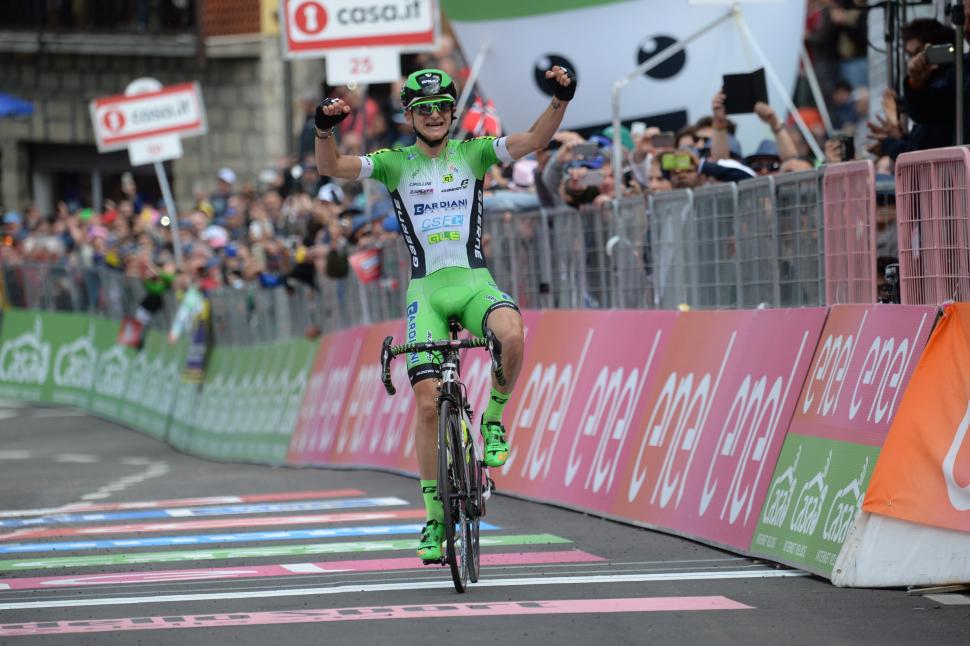 Ahead of the day’s biggest climb, the Category 1 Pian del Falco, Giant Alpecin’s Georg Priedelr was riding solo ahead of his fellow escapees as the group splintered behind him.

But he was overhauled on the ascent by Vini Fantini’s Damiano Cunego and the Bardiani-CSF pairing of Stefano Pirazzi and Ciccone.

Cunego crested the summit, 16km out, first to take back the leadership of the mountains classification, but on the descent Ciccone got away to ride off to a solo win, with Pirazzi controversially nudging Cunego off his line as they entered a hairpin bend.

Ahead of the finish Tinkoff’s Ivan Rovny had overhauled Cunego and Pirazzi to take second, with BMC Racing’s Darwin Atapuna – both in that earlier break – third.

After the stage, Ciccone said: "Today I'm living the most beautiful day of my life. It doesn't feel real. It's like being in a bubble.

"Finally I've taken my first pro win. It highlights how much our team is like an enormous family. I thank them all, especially Nicola Boem who sacrificed himself for me.

"I hope I have paid him back for the faith he put in me by pulling our group. What a wonderful day!"

Behind, Astana moved to the front of the Pian del Falco with Michele Scarponi setting a pace that whittled down the overall contenders’ group, with overnight leader Brambilla among those in trouble.

He would make it back on the descent, but was distanced on the final climb. Jungels becomes the third Etixx-Quick Step rider to wear the maglia rosa in this year’s race, with Marcel Kittel having also spent a day in the race lead.

Meanwhile, Andrey Amador, third overall this morning, had made a move on the way down from the penultimate climb as he rode into second place overall, with Movistar team mate Giovanni Visconti, who had been in the break, dropping back to help him.

The Costa Rican had looked set to be heading into the overall lead, but was pulled back on that final ascent to the finish. Another Movistar rider, Alejandro Valverde, moves to third on general classification.

New race leader Jungels paid tribute to the team mate he took over the race leader's jersey, saying: It doesn't often happen in cycling that the first rider in the classification pulls for the second one, so what Brambilla did today is incredible.

"He was dropped, then he came back and pulled again. I can't believe it. This is one of the greatest days in my life.

"We're a group of friends. We've had three riders in the maglia rosa, starting with Marcel Kittel. We've achieved more than we expected - at least, I have."