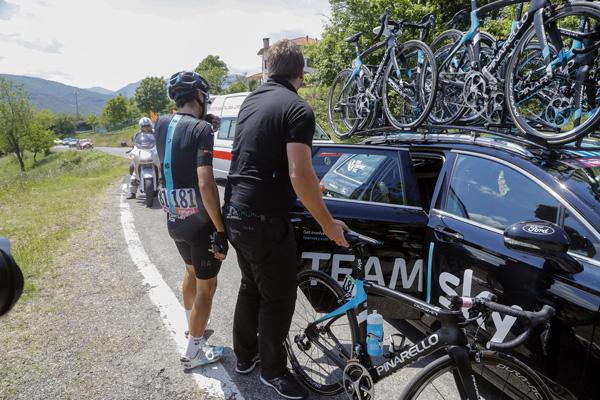 Team Sky's challenger for the 2016 Giro d'Italia, the Spanish rider Mikel Landa, has abandoned the race during today's Stage 10.

Landa, who was third overall at last year's race when he rode for Astana, had been in eighth place on General Classification after Sunday's individual time trial.

He lay 1 minute 18 seconds behind race leader Gianluca Brambilla of Etixx-Quick Step, but just 30 seconds behind 2013 champion Vincenzo Nibali, one of the favourites for the overall.

With that long time trial behind him and the mountains ahead likely to see him pick up time on rivals, the 26-year-old seemed to be in a strong position as the race reached its midway point.

However, he was struggling from the start of today's 219km stage from Campi Bisenzio to Sestola and was off the back on the very first climb.

Losing six minutes to his rivals, he abandoned the Giro before the next ascent began.

Sky are now likely to target stage wins in a bid to rescue something from the race, with their next best placed rider overall Nicolas Roche, who is in 28th position almost 7 minutes off the lead.

Sky said in a tweet that Landa, shown here signing on this morning, had been forced to retire through "illness."

Signing on for another day at the office! Stage 10 of the #Giro is just about to get started (@giroditalia) pic.twitter.com/rsvncpKENr

In a statement, team principal Sir Dave Brailsford said: “Mikel was ill overnight but we spoke this morning and he started today’s stage with the hope of being able to pull through.

"It was pretty clear that the illness had badly affected him and that he wasn't going to be able to continue.

"We are really disappointed for Mikel, who was riding well and looking forward to attacking in the mountains and animating the race.

"However we came here as a team and we’ll continue as a team. There is a long way still to go and, although our focus was on Mikel, there’s plenty of time for us to still make an impact at this Giro”

Team Doctor Inigo Sarriegui added: "Mikel woke up early this morning feeling unwell with abdominal pains. It appears as though he has a viral gastroenteritis.

"We will assess him at the team hotel and then determine the best course of treatment to ensure he recovers as quickly as possible.”

Simon Warren, author of the 100 Climbs series of books, noted on Twitter that Team Sky had held a barbecue on yesterday's rest day.

The perfect way to end a rest day. Tomorrow we go back racing! #Giro pic.twitter.com/7TPitUAxQ8