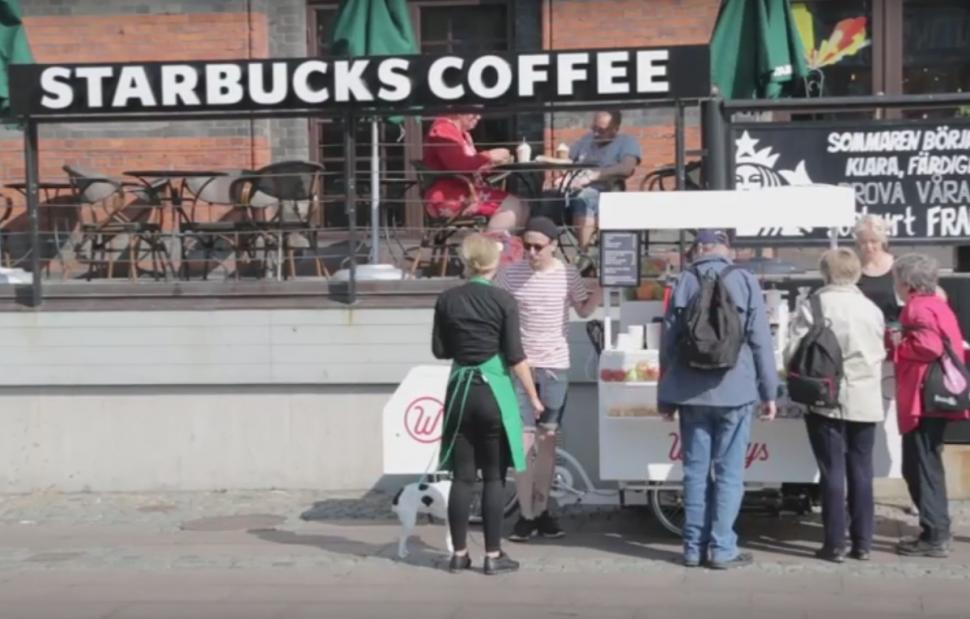 Video: CEO of mobile bike café franchise plonks one of her sellers directly outside Starbucks

Wheelys has just raised $2.5m in funding
by Alex Bowden

She says they’re not a competitor, but Maria De La Croix, the CEO of mobile bike café franchise, Wheelys, still saw fit to set up right outside Starbucks for a day. After reportedly serving 210 customers to Starbucks’ 148 in the time her seller was there, they may be wondering about their decision not to employ De La Croix because she had blue hair.

De La Croix says she applied for a job at Starbucks three years ago. Not that she bears a grudge, but she thought it would be entirely appropriate to set up directly outside one of their cafés to see how her new business fared in comparison.

They’re not rivals though. “Starbucks basically offers the same GMO sugared drinks as McDonalds and all the rest, only with a different logo,” she says. “To compare us with Starbucks would be like calling Best Western Hotels a competitor to AirBnB. We are growing with three outlets per day right now, yet we have just scratched the surface of our potential. Sure, we might force Starbucks out of business, but that would not be a goal, but collateral damage.”

The blue hair, it seems, is no longer a problem. Although she does admit that she’s used to people looking for “the real boss” behind her.

Billing itself as ‘the world’s greenest café,’ Wheelys mobile cafés are trikes furnished with a solar panel, electric motor and an optional windmill. Last month, the firm easily surpassed its $100,000 funding goal on Indiegogo and it has now raised $2.5m in further funding with investors including Paul Buchheit, the creator of Gmail; Jared Friedman, Founder of Scribd; and Justin Waldron, aco-founder of Zynga.

They also offer one more Starbucks comparison which goes some way towards explaining their success. Where a Starbucks franchise apparently costs $500,000 to start, a Wheelys café costs just $5,000.