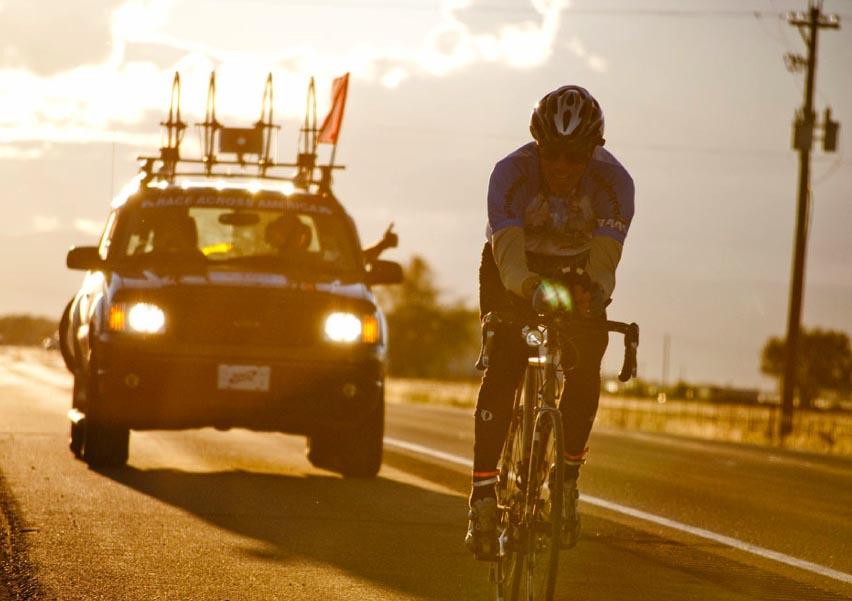 RAAM update: hallucinations set in after a week on the road

"The white lines look like elf shoes"...
by dave atkinson

Days of sleep deprivation are taking their toll on the RAAM riders as the men's race moves into its 6th day and the women mark a whole week on the road. With time off the bike kept to a minimum it's natural for the riders to suffer, and one of the things that they suffer from is hallucinations.

"It's always the same", ninth placed Rob Morlock tells the latest video diary. "The white lines, the vegetation starts to look like elf shoes. Basically comes alive. It's crazy". While there's people out there that'd pay good money for that kind of experience it's not the sort of thing you want to happen while you're on a bike, at night, in the desert. It just goes to show that there's more to ultra distance riding than simply being fit.

On top of that there's been some pretty serious weather out on course, with the storms over Colorado severe enough to make the riders rethink their schedules and spend a bit more time under cover. Last time we reported on the men's race Gerhard Gulweicz (AUT) was making up time on leader Jure Robic (SLO), but the four-time winner has been piling on the miles in the last 24 hours and has extended his lead to around 80 miles after nearly 1900 miles of racing. The men are well ahead of the leading women now, with Barbara Buatois (FRA) passing time station 31 at about the same time as Robic rolled into TS33. Buatois is 150 miles up the road from second placed Michele Santilhano (RSA) with Sabrina Bianchi (ITA) still in third.

We're not quite sure of Paul Carpenter's story in the 50-59 age group but whatever happened to him wasn't good as he's slipped back in the rankings and running fifth overall (fourth standard bike) in the category, two hours behind next-placed Valerio Zamboni (ITA) and four time stations behind leader Timothy Woudenberg (USA). Keep going Paul!

Team wise the Convicts of the Road and Sir Steve Redgrave crew are battling it out for third place. There's only about 20 miles between the two UK teams. They don't look likely to catch USA based Team Type 1 or Team ViaSat who are occupying the top two places, but they're looking strong. In the teams of four Sharp4Prostate of the UK are in third and Team RAF Survitec Epic in fifth but it's all very close, with only about 50 miles between second and fifth places. Bandwidth.com (USA) are building up a bit of a lead though. In the pairs UK based Velocity Bikes are third of three behind the Biking Vikings (NOR) and Team Summit (USA)