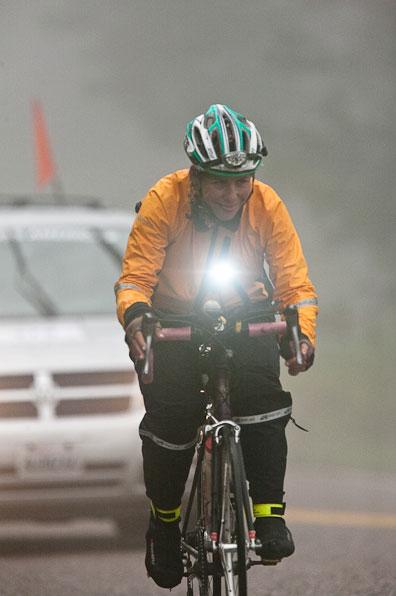 After the fairly benevolent conditions through the normally unbearably hot Arizona desert, things took a turn for the the worse weather wise, with low temperatures, and high winds as well as 'destructive hail and deadly lightning' greeting the riders on the Colorado passes.

We're not sure how deadly lightning differs from the non-deadly variety but judging from the pics of the ride the last day or so has been pretty gruelling, with the riders battling the mental and physical effects of the weather. There were plenty of balaclavas on show as the cold temperatures took their toll.

Barring any major disasters the women's outright race looks to be in the bag right now for recumbent rider Barbara Buatois of France, although obviously there's a long way to go. She's more than 100 miles and two time stations up the road with half the race done, and the lead only seems to be growing. Michele Santilhano (RSA) lies second on the road but she's in first place in the standard bike category. Italy's Sabrina Bianchi is a further time station back.

In the men's race it's a lot closer with the four-time champion Jure Robic (SLO) around 50 miles up on Gerhard Gulewicz (AUT). That gap has been coming down though, and reports from the roadside indicate that Robic hasn't been at his imperious best through the Colorado mountains. Mark Pattinson (USA) lies in third place.

The men's 50-59 age group is led by Tim Woudenburg (USA) on a recumbent, but the race for the upright bikes is between Gregor Komescher of Germany and our own Paul Carpenter. The two were neck and neck on the road last time we reported on their progress but Komescher has since managed to build up a lead of a couple of hours. That may just be a difference in stops and sleep patterns, so we'll keep our fingers crossed for Paul.

The RAAM teams are now on the road too, and the two 8-man UK entries – Convicts of the Road and the Sir Steve Redgrave Crew – are lying in fourth and sixth respectively, with only half an hour separating them at the last time station. Team Type 1 (USA) are leading that category with an impressive 23.14mph average over nearly 900 miles.

The four-man category is being led by the American Bandwidth.com outfit but the UK contingent of Team Sharp4Prostate and Team RAF Survitec Epic are putting in a strong challenge in 4th and 5th places, with the 2nd and 3rd placed teams less than an hour down the highway. Team Velocity bikes are third of three in the pairs, with 536 miles covered at an average of just over 16mph