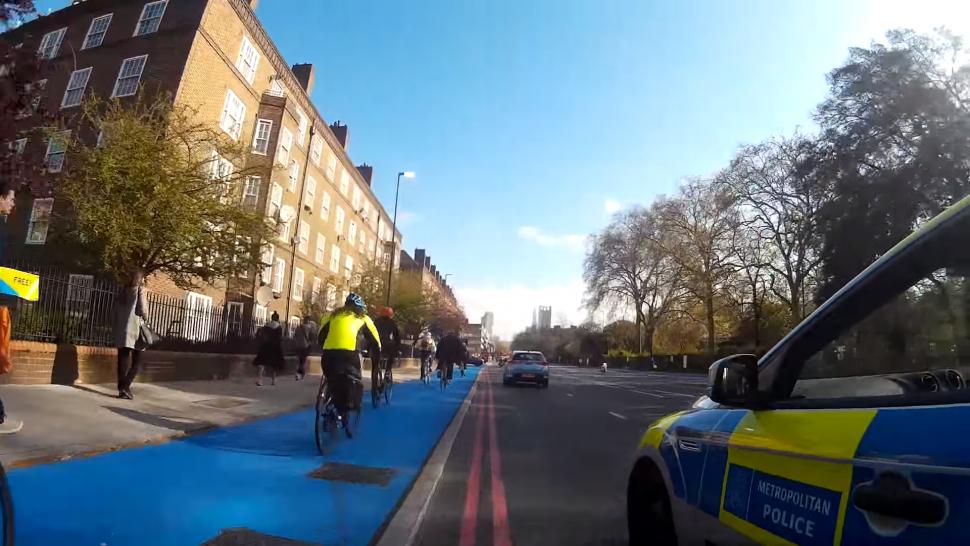 Police pull cyclist over for not using Cycle Superhighway

A cyclist has caught on camera the moment he was pulled over by police for leaving a Cycle Superhighway and riding on the road with motor traffic.

The cyclist, posting on YouTube as Clockwise Cycling, pulled off Cycle Superhighway 7 on Kennington Park Road, South London, and onto the carriageway, when he was stopped by a Metropolitan Police Officer, who asserts the man was riding dangerously by suddenly exiting the cycle superhighway and joining the motor traffic.

The police officer drives alongside the cyclist, and can be heard telling him there is a cycle superhighway, until eventually, after a car horn is heard several times, the police car’s sirens come on.

The officer tells the cyclist: “There’s a cycle highway there for you. For you to suddenly then come out it’s going to cause you to get knocked off your bike.”

When the cyclist says he couldn’t join the cycle superhighway because it was too busy, the officer tells him “yes there is, you just have to be patient, like everyone else on this road”.

The rider claims it would have been dangerous for him to remain on the cycle superhighway because of the number of cyclists using it.

The officer repeatedly asserts the man was cycling dangerously, and tells him “you will, because of the way you cycle, end up underneath a lorry”.

The officer, who says he has been driving as a police officer for 30 years, said: “I’m retiring soon, and idiots like you, riding your bike like you do, will continue to get yourself knocked off. But you won’t listen, will you?”