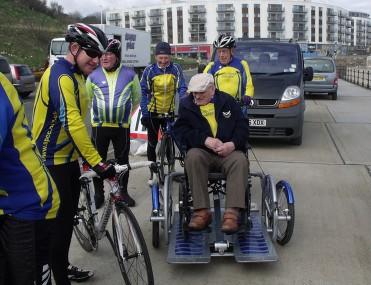 A 100-year-old man who celebrated last year’s Tour de Yorkshire by waving a banner outside his nursing home has cycled part of the route to prove no-one is too old for cycling.

Stan Chadwick, who was a keen cyclist since the age of 11, and has never owned a car, was a founding member of Scarborough Paragon Cycling Club, setting it up in 1953 with his friends Len Raine and Ken Atkins, both of whom he has outlived.

On an assisted cycle, Stan crossed the finish line of Stage Three of this year’s Tour de Yorkshire route this week, riding along Scarborough’s North Bay.

Stan raced seriously between the ages of 16 and 80, and last rode out with a club when he was 90.

He told ITV that he had “only been a medium rider all his life” and “was never a star or anything like that.”

This week’s ride was provided courtesy of Scarborough and Ryedale Community Cycling, a group for able-bodied cyclists and those with mobility issues.

Stan, who has kept in touch with new developments in cycling his entire life admitted: “I can’t quite get my head around carbon fibre!”

Sir Gary Verity, Chief Executive of Welcome to Yorkshire said: “Stan is a truly remarkable man who has lived an equally remarkable life. He embodies the spirit of the Tour de Yorkshire and is a great example of how cycling can enrich people’s lives. He is an inspiration to us all.”

Back in 2013 we reported how Scotland’s oldest cyclist, 97-year-old Neil Sinclair from St Martins near Perth, said he was hanging up his wheels, but planned to keep fit by using an exercise bike.

Mr Sinclair said: “I’ve cycled all my life and it’s kept me fit. But I’ll be 100 in three years time and at my age, I think it’s safer for me to keep off the roads.”

“I’d love to get back on a real bike but with all the potholes and cars going so fast it’s not sensible.

“I got the exercise bike from a neighbour and it means I can keep on cycling. I still do thousands of miles, I just don’t go anywhere.

“I used to stop off at hotels for my lunch. Now, when I’m hungry, my wife Elizabeth brings me out a piece of fruit cake and a cup of tea.”

Mr Sinclair took up cycling when he returned to Scotland after the Second World War.

“Cycling has been my hobby my whole life,” he said. “When I was younger, I used to cycle to work in Perth every day. I took my bike everywhere. I’ve had a few mishaps but I’ve always bounced back.

“And my family has always felt I’m sensible enough to know when to stop.

“But I’m healthy thanks to cycling. I could never think of sitting in front of the television doing nothing.”