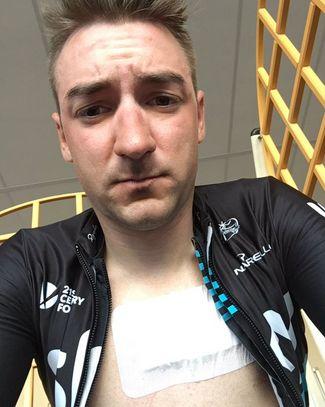 "A miracle" - Elia Viviani on outcome of Paris-Roubaix moto crash

Team Sky sports director Servais Knaven, winner of Paris-Roubaix in 2001, says there is no reason for motorcycles to be so close to riders in the Arenberg Trench, where Elia Viviani was hit from behind by one yesterday following a crash during the 114th edition of the race. The Italian rider has said it was “a miracle” he wasn’t seriously injured.

Coming just a fortnight after the young Belgian rider Antoine Demoitie lost his life when he was struck by a motorbike after crashing at Gent-Wevelgem, yesterday’s incident has led to more demands for the UCI and race organisers to take action.

Viviani was in a big group which came to a stop on the narrow, straight 2.4 kilometre section after riders including Orica-GreenEdge’s Mitchell Docker crashed in front of them. Immediately after crashing, the moto hit the Team Sky rider from behind.

The Arenberg, which begins with 95.5 kilkometres to go, is emblematic of the race and with its slight downwards incline is taken at speed and as one of the hardest sections of pavé, crashes are a certainty.

In common with a number of other sections of cobbles on the route of the race, team cars are diverted away from the Arenberg, rejoining the parcours afterwards, but cars from the race direction as well as motorbikes carrying commissaires, neutral service and medical personnel and TV cameraman are allowed, often following the riders at close quarters.

Quoted on Sky Sports News, Knaven, who is Team Sky’s lead sports director during the cobbled Classics campaign, said: “It should not be possible. If you go in Arenberg, there should not be any motorbikes near the riders."

The incident was captured on video by British spectator Guy W and has been shared widely on Twitter as well as reported on by the press around the world.

Viviani, aged 27, told Italian sports daily La Gazzetta dello Sport: “It’s a miracle I came out of it okay, I was lucky.

“To avoid the crash, I moved to the right of the road. Seconds later, the moto head me in the rear, pushing my chest against the barriers.

“I wasn’t able to breathe for a few seconds, and it still hurts when I breathe. I was very afraid to begin with, then I calmed down in the ambulance since the pain wasn’t getting worse.

“Watching the video, I realised then that I’d been lucky. I don’t know how it happened, whether the moto rider was too close, or distracted, or if he was going too fast. But it could have been a lot worse.”

Today I was unlucky but at the same time the most lucky of the world!A big Chest trauma and two cut (chest and hip) pic.twitter.com/7UVCA646mq

Team Sky doctor Derick Macleod said: "He thought he had anticipated the crash and saw it happen in front of him. He managed to come to a stop on the right by the barrier when the motorbike went into him.

"He went to the hospital and the X-rays revealed he has no fractures. He has got a few bruises and abrasions and he is a bit sore, obviously, but we're really thankful he has got no significant injuries. We expect him to make a quick recovery."

Among professionals to retweet footage of the incident was Lotto-Soudal’s Thomas De Gendt who pointed out that riders weighing 70 kilos crashing into each other was an entirely different matter to a 300 kilo motorbike striking a cyclist.