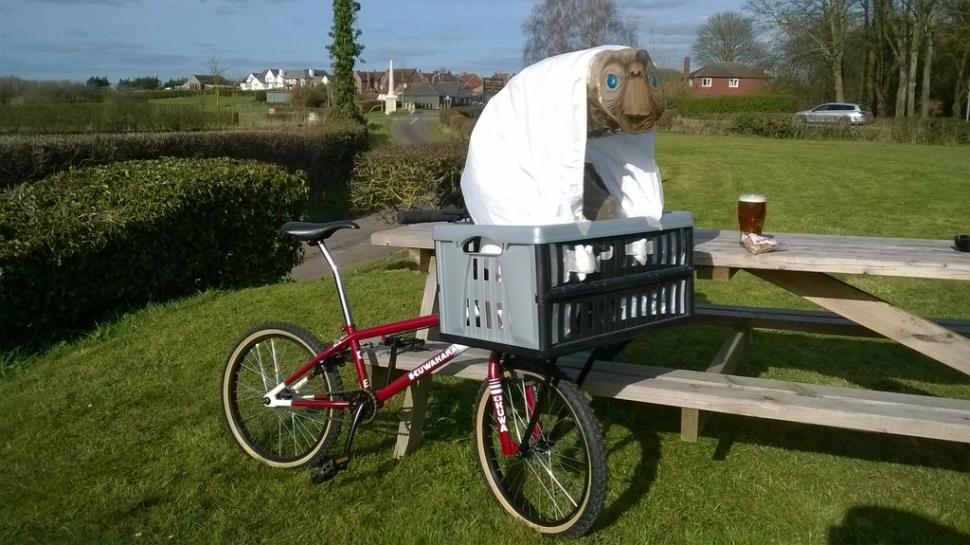 Dave Preece builds BMX bike with model of cinema's most famous extra-terrestrial in basket...
by Simon_MacMichael

We’ve covered some great custom bikes on road.cc, we’ve covered cyclists doing something out of the ordinary, and this is up there with the best – a Worcestershire man who rode to the pub on Good Friday on a bike paying tribute to ET, with a model of the eponymous Extra Terrestrial from the Stephen Spielberg film in the front basket.

Dave Preece, who works in a bike shop, posted a picture of the bicycle together with its iconic passenger to Twitter after his pub stop, and it wasn’t just on the social network that it grabbed attention, with drivers stopping to take photos on his 15-mile round trip for a pint.

He told road.cc: “I made the bike as I was really into BMX in the 80s. I had a mk1 Raleigh burner at the time but always wanted a Kuwahara ET” – the bike featured in the 1982 movie.

“I looked at originals that were coming up for sale but couldn't justify the cost so I decided to make a replica. It's not meant to fool anyone into thinking it's an original but it looks pretty good and cost a fraction of what an 80s Kuwahara would.”

So how did Dave go about building the bike, and the model of the character from the 1982 film? “I bought a 2015 BMX that had a similar frame shape with fairly narrow frame tubes,” he explained.

“It came with black rims and hubs so they didn't need any attention. I bought some gum wall Tioga Comp 3 tyres, a black saddle, chrome bars and seat post, a sticker set and then set about taking the bike apart to spray it.

“I spent quite a bit of time sanding it back to bare metal then sprayed it with rattle cans. The finish is better than I expected.

“Once the bike was finished I made a model of ET and fitted a basket. The ET is chicken wire covered in papier mâché, then painted and varnished. His face is a card face mask.

“I made the papier mâché much thinner by his heart and fitted a flashing LED bike light inside the model so his heart glows.”

That light isn’t the only electronic feature inside the ET model, however. Dave said: “There is also a Bluetooth speaker inside the model and I downloaded the music from the film so that can provide a sound track while I ride!”

We asked him how long it took to put the bike – and the model – together. He said: “I worked on the project on and off in the evenings over the winter.

“I work in a bike shop so the mechanical side of things was easy but it's the first time I've ever sprayed anything. I didn't keep track on how long it took. I guess if you had a week off work you could do one from start to finish.”

He said that during his trip to a pub in Worcester, “people loved the bike,” adding: “It's not the only slightly unusual bike ride I've been on, last year I cycled 970 miles from Land’s End to John O'Groats on a 54" wheel penny farthing.

“That ride was tough, 15 very long days in the saddle but I raised a lot of money for the national deaf children's society and I have some great memories that will last my lifetime.”

We asked him if he’d consider doing a similar ride on his new bike along with his riding buddy. “I might do a long cycle tour on the BMX with ET in the future,” he replied, “but for now it's just going to be used for trips to the pub on sunny days.”