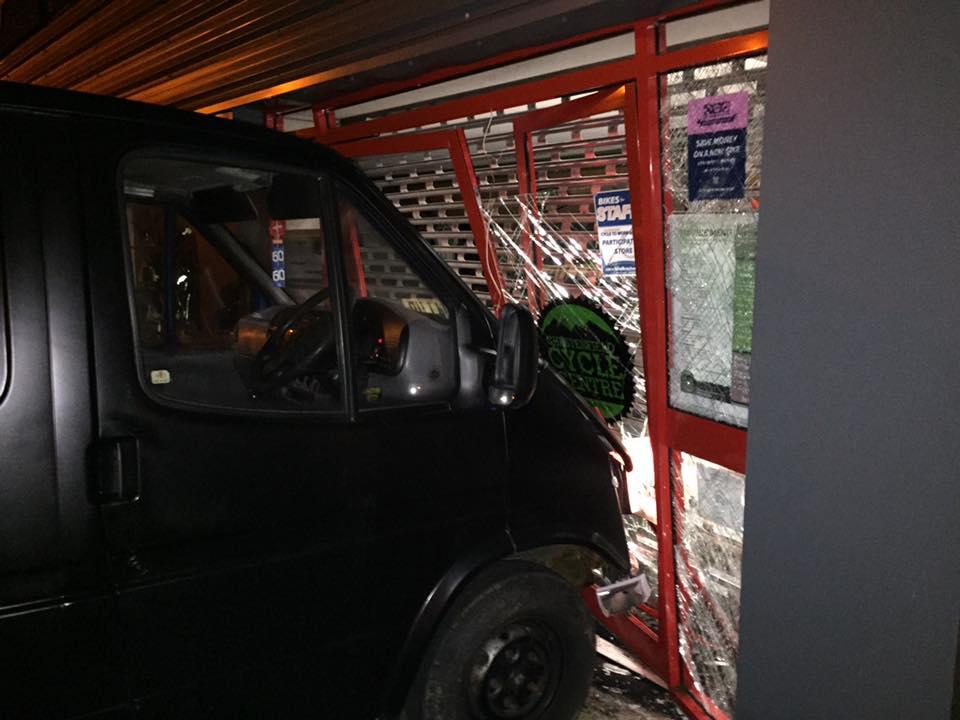 Thieves have ram-raided two bike shops within 25 miles in one night, making off with thousands of pounds worth of bikes, in what are believed to be linked thefts.

In midnight ram-raids on the shops, the Specialized Concept store in Nottingham, and Chesterfield Cycle Centre in Chesterfield, thieves stole a number of high-end, rare bikes worth thousands of pounds.

The public are asked to be vigilant of anyone attempting to sell the bikes, and police are appealing for anyone with information to come forward.

Jail for man who stole 17 bikes from Chelmsford station

Nottingham Police report just after midnight in the early hours of Tuesday 15 March, two men drove a stolen Ford Fiesta into the Specialized Concept Store on Nottingham Road, New Basford, stealing two bikes worth £3,000-£3,500 each (images of the bikes are here).

Officers believe the incident may be linked to the Chesterfield Cycle Centre ram-raid, also in the early hours of Wednesday morning, 16 March, when a van was driven into the front doors of the shop, in Top Road, before thieves took three bicycles, leaving the van at the scene.

Det Sgt James Bond, of Nottinghamshire Police, said: “We would urge anyone who saw anything suspicious in the area at the time of this incident to get in touch.

“We are also asking people to look out for these bikes – which are quite unique in appearance - particularly on selling sites. If you hear of anyone attempting to sell such a bike, we would like to hear from you.”

Chesterfield Cycle Centre employee, Tom Henton, posted images of the bikes, which he says are worth £15,000, on Facebook.

He said: “Let's make these bikes to [sic] hot to handle share please!!” He says the stolen bikes include a large Yeti sb6c in teal, a medium Yeti sb4.5c in green (both pictured, above) and a Lapierre zesty am 527 carbon.

On the same night, Expert Bike Repair in Rotherham, which is 19 miles North of Chesterfield Cycle Centre, was broken into. Bikes stolen include a red and white Lappierre 214 with dropper post, a black Bergamont hardtail and green Bergamont hardtail.

1
Near Miss of the Day 365: Lorry driver in close pass on time trial rider + video (includes swearing)
2
Rapha chief confirms move into mountain bike clothing – with range launching next year
3
Driver hands himself in to police after cyclist killed in Altrincham hit and run
4
Lorry driver who was three times over limit for cocaine is jailed for killing cyclist
5
The bicycle is the future of urban mobility, predicts Deloitte report
6
Chris Froome to return to racing at UAE Tour next month
7
Five cool things coming soon from Merida, Mavic, 100%, Ritchey and Xplova
8
Warning to retailers after two bike shops targeted by turbo trainer thieves this week (+ video)